A Feminist Reconstruction: Essential Demands for 8M and Beyond 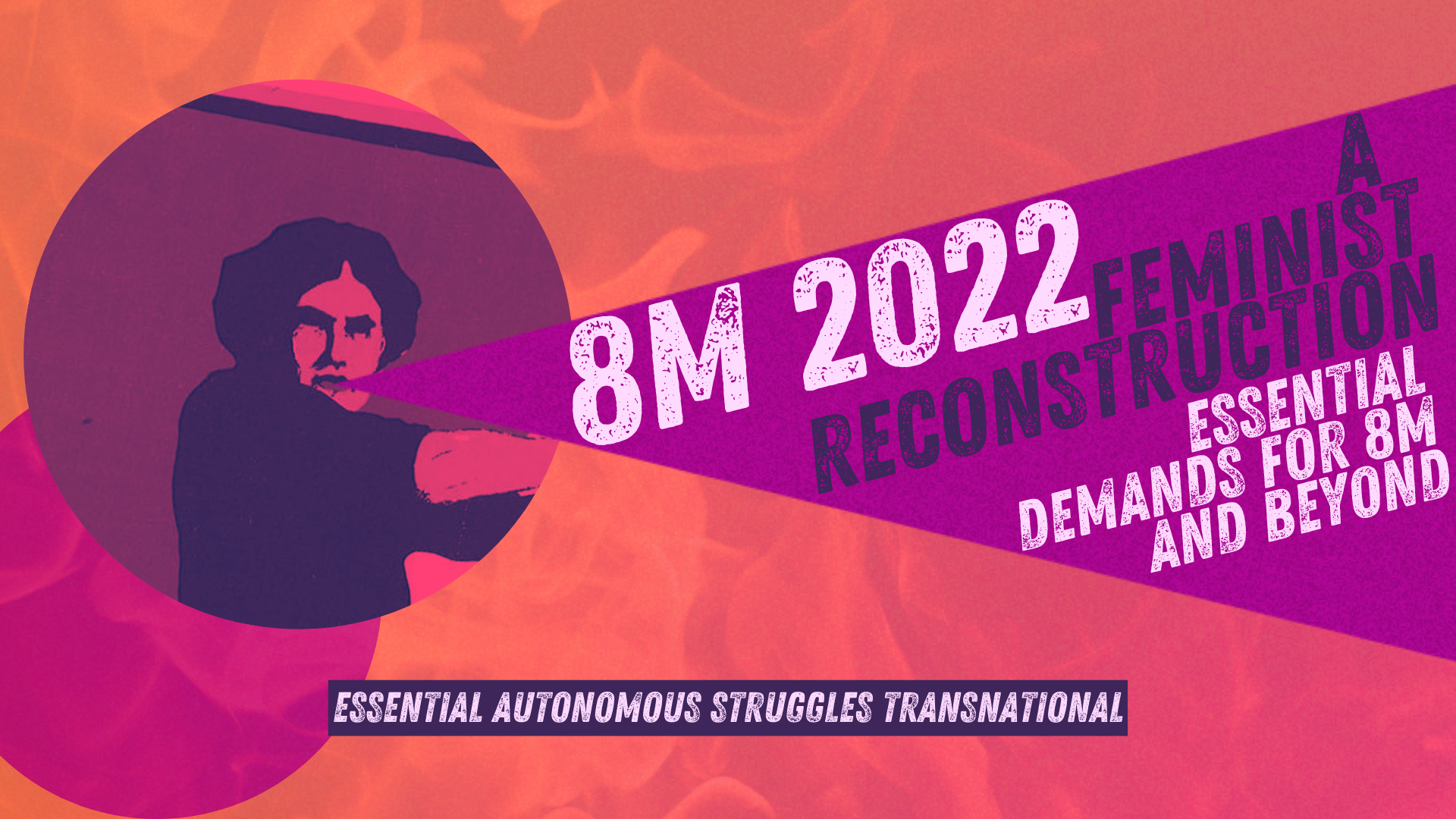 From the moment we wrote this text, the war in Ukraine broke out, changing dramatically the scenario in which the next feminist strike of March 8th, as well as any political inititiative within and against the post-pandemic reconstruction, will take place. We condemn Putin’s regime and its invasion of Ukraine and stand together with all those who oppose the war in Ukraine, in Russia and everywhere else. We are seeing how EU decides to invest in weaponry, through funds already allocated one year ago and already used elsewhere, from Georgia to Moldavia, from Ukraine to Mali. In our call for March 8th we are denouncing that we will not abide by this post-pandemic reconstruction: a reconstruction characterized by patriarchal oppression, racism and exploitation, in which today’s arms race is only the tip of the iceberg. But in fact war did not start last week. The current conflict hits after years in which governments have been waging war against women, legitimizing patriarchal violence and racism and limiting sexual freedom. The current war compels us to take side for a transnational politics of peace. Now it is more essential than ever to engage in a feminist strike against the war for March 8th!

It has been two years already since we started living in a deadly pandemic. Тwo years since the labor we do has been claimed essential while our lives remain disposable. In this context, the challenge for our transnational 8th of March 2022 is to show the links between neoliberal and ultra-conservative agendas that underpin and profit from the EU and national recovery plans, and build our capacity to refuse their terms.

Many governments in Central and Eastern European (CEE) and bordering countries have combined technocratic recovery measures with increasingly authoritarian methods. Using the pandemic as an excuse for outright state violence, they have pushed policies against women and sexual and ethnic minorities such as:

-Hungary has introduced a family bill reinforcing the subjugated role of women in the family and society, has banned trans people from changing documents and introduced a law against LGBTQIA+ content in media and education;

-Poland has passed an abortion ban which has already claimed women’s lives and is threatening many more;

-Turkey has withdrawn from the Istanbul Convention, has escalated its repression, arrests and killings of Kurdish and feminist activists, and is planning to abolish alimony for divorced women.

In this hostile context, women, LGBTQIA+ people and ethnic minorities, as well as anti-fascist activists across the region have faced unwarranted arrests and, in countries such as in Bulgaria and Georgia, have been attacked by far-right groups. This ultra-conservative wave in CEE and beyond has seen a Janus face in the neoliberal solutions proposed by the “progressive” EU. Together with national governments, the latter has established new conditions of exploitation, racist and sexist division of labor and oppression, via the Recovery Plans.

Neoliberal recovery plans are, in fact, producing and reinforcing internal, regional and transnational hierarchies that have only one winner in sight: big capital. Essential workers are excluded from these recovery measures. Women are facing unemployment and involuntary part-time work, often to perform unpaid care work at home. Migrant care workers, predominantly women, are left out from social benefits and immigration quotas. The market-led green transition is causing mass redundancies and the liberalization of energy sources is increasing utility costs, thus endangering our survival. Energetic rehabilitation of housing units and gentrification of urban spaces are causing overcrowded living conditions, higher rents and mass evictions, while the social housing stock is not meeting the rising number of inquiries.

In addition, the EU Gender Equality Strategy presents itself as an alternative to conservatism but promotes the neoliberal agenda, reproducing exploitative, racist and patriarchal hierarchies. This EU strategy – copied by countries outside the union as well – stipulates that member states must implement: the reduction of corporate tax to incentivize women’s hires; cuts to public welfare, forcing women to enter the job market for miserable wages; allowances for paying babysitters and care workers in those countries granting remnants of welfare.

The strategy divides women who should dedicate more time to productive labor from those who should perform care work for unlivable wages. It is taken for granted that other women, mainly migrants, will take care of the reproductive burden for poverty wages. The latter do that often under the blackmail of the residence permit, the abuses of the bosses, the constant threat of losing wages and housing, while leaving their own families. The underlying aim is to support middle-class women, while producing new hierarchies and deepen existing ones among women across class, race and geographical location. In this transnational context, CEE countries work as a reservoir of cheap productive and reproductive labor benefiting Western and local capital. Ultraconservative ideology feeds into this scheme: the insistence on traditional family values takes for granted the sexist division of labor according to which women are those providing the essential care work in the household.

Despite the differences between contexts, we see an urge to struggle against the prevalent patriarchal oppression, capitalist exploitation, racism and homophobia. In the last months, we took part in and saw emerging protests, strikes, and struggles across Europe and beyond: the 25th of November marches and actions against increased patriarchal violence; the strikes of the social welfare agents in Georgia; the miners’ protests in Bulgaria; the metro and bus driver strikes in Romania; the demonstrations against the neoliberal ‘green’ transition in the Balkans and the uproars against higher energy prices in Kazakhstan.

The question is how to transform our struggles into a collective transnational power, nurture political communication and create conditions for a common social strike. Inspired by the ongoing struggles, we declare our plan for a feminist reconstruction for 8M and beyond! 8M is an important moment to join forces transnationally on the following terrains of struggle:

For patriarchal states and fascist organizations, women are subordinate and should be reduced to the role of incubators and caregivers, while LGBTQI+ people, migrants, religious and ethnic minorities are treated as disposable. We won’t let fascist or conservative revivals strengthen the idea of the nuclear family and patriarchal institutions. No more attacks on our existence and on our sexual and reproductive freedoms!

Our societies wouldn’t have survived if it was not for the labor of essential workers – healthcare workers, social and care workers (paid or unpaid), teachers, logistics and agricultural workers, grocery store workers, sanitation workers. Yet, the national and EU recovery plans don’t even mention them, alongside other workers whose rights are not recognized, such as sex workers. We reject the capitalist imperative that categorizes people as essential only as long as their labor is exploitable! We demand a recovery that puts social reproduction, public and social housing, as well as care work and the sectors that enable it, at the center. We want: higher and equal European wages;, freedom of movement and welfare for all, regardless if we are migrants, homeless and people who don’t have paid or ‘formal’ jobs!

Migrants and ethnic minorities often lack access to the welfare systems and other resources. They are subject to institutional racism and the blackmail of the residence permits. We demand unconditional European residence permit and social welfare for all migrants, refugees, asylum seekers and minorities!

The capitalist regimes want to convince us that “people in general” are responsible for the climate crisis and not the exploitative conditions of production and extraction. They want us to believe that the poor should pay the price for the green transition. We demand job guarantees for transitioning sectors of the economy and investments for dignified job positions that benefit communities and the ecosystems. Recovery funds should empower women, LGBTQIA+ people, migrants and workers and other marginalised groups, not the private sector.

We demand a stop on all forced evictions and immediate rehousing for the homeless and those living in toxic environments or overcrowded households. We demand anti-racist housing policies, as well as fair housing conditions for refugees and asylum seekers. We demand support for survivors of domestic abuse and possibilities for rehousing on demand. We demand that the recovery funds are focused on building and guaranteeing public and social housing. We want safe and affordable housing for all, instead of housing treated as a profit-driven commodity.

With these essential demands we reject neoliberal and conservative reconstruction and invite all to join the struggle for a feminist reconstruction on March 8th and beyond! Let’s fight patriarchal and racist capitalism and demand a post-pandemic world where not only our work, but also our lives are essential!