#Globalwomenstrike / Always with our Heads Held High against Racism and Exploitation. Voices from Italy 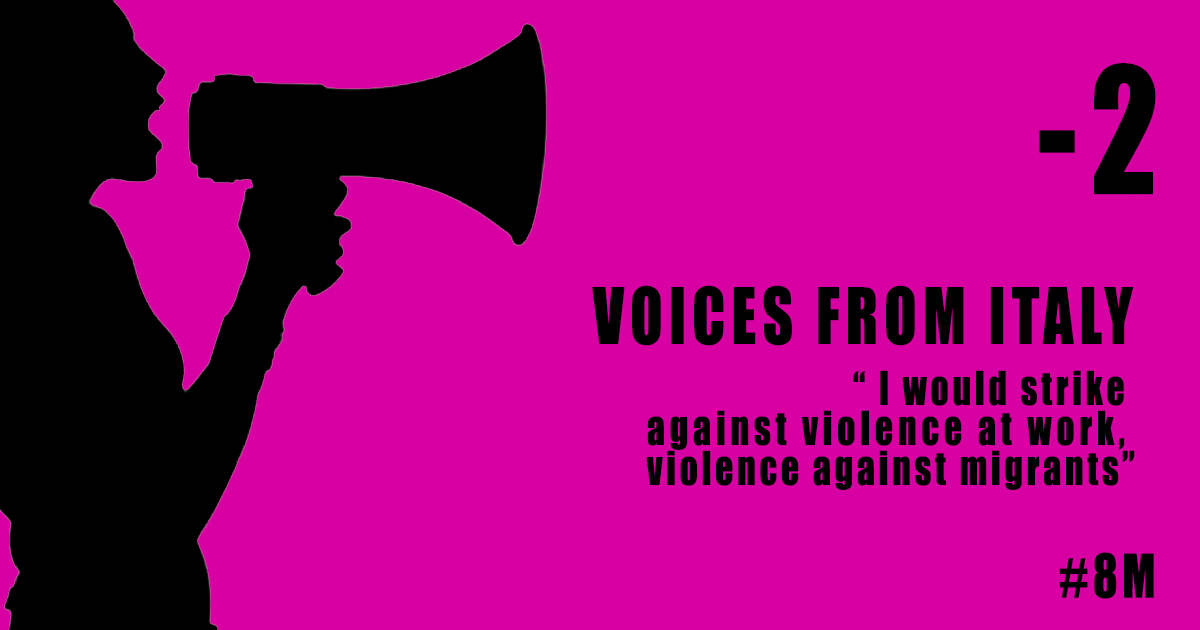 Interview to A. (Italy) by TSS Platform

Just few days before the global feminist strike of the 8th and 9th of March, we publish a voice from Italy. A. comes from Nigeria and she has been living in Italy for 11 years now. She has done many jobs, changing from a factory work, to a cleaning job, to work for large-scale retailers. She tells us how working conditions, racism, abuses and wages have worsened year after year, also because of the work and immigration laws passed by the Italian government. A. fights every day against a situation where she is exposed not only to exploitation, but also to the stress of the pressure imposed by supervisors, the exhausting working rhythms and the humiliations in a working environment where workers assigned to cooking and cleaning jobs are treated as second-class workers. Still, A. tells us that she has run out of patience and she desires to live a life freed from the residency permit’s slavery and exploitation. To strike for claiming a European residency permit unbounded from work, family and income means to strike against violence and for the freedom to move and to stay.

A: I am 25 years old and I have been living in Italy since 2008 and working for Ikea since 2011. The world of work has become terrible. In my ward there is no fresh air, you are not allowed to open the windows and every day, while you are working, the supervisors come and assign you a different job, while wages are always lower.  We are there, we can’t talk to each other, and if we talk, they tell us to go away: “if you don’t want to work here, there are other people that would like to have your place.” So, you shut up, you have no choice, because you need to pay for your rent. They are exploiting us, especially since the Jobs Act of Renzi. They actually have the power to use migrants. Because there are only migrants to work in these wards. We can’t speak up, because no one supports us, we are alone. Plus, because of the low income, those who have children risk of having them taken away by the social services.

TSS: Does being a migrant woman affect how you are treated at work? How?

A: Yes, a lot. At work, it should be indifferent whether you are Italian or foreigner, because we are all equals. Therefore, it is not possible that, if you have been working in a place for 9 years, when an Italian worker comes, but she knows nothing about the job, they put her in a higher position than yours, and that if you try to point out her mistakes they tell you that you are none. Then, sometimes they tell you that if you had studied, you would have gotten different and better positions. But I have studied! I have a degree! But I haven’t grown up in Italy and they think that the degree I got in my home country is not the same, which is not true. I don’t understand if they are pretending or doing so on purpose.

A: Well, not where I’m working right now, even if everybody flirts with us workers, but this happens everywhere… instead, where I was working before, there were men trying to sleep with us and I had to get away from that job.

TSS: Have you participated in any struggle recently, for instance concerning some specific policy enacted by the government or in your workplace? What was the result? Which obstacles and limits did you face?

TSS:  If you could strike, would you strike against what? How?

A: Against this violence in the workplace, against the violence of migrants’ exploitation because this has been going on for too long and it is not fair. My colleagues are tired too: sometimes, while they are cleaning in the kitchen, and the supervisors come and start to speak badly of them and of their job, they would like to throw things to them because they cannot stand the situation anymore. There is no more patience. Rather, some say: “no matter what happens, enough, I am out of here”. Many of us are looking for other jobs because we are stressed out. We never complain for nothing, but our work is hard, supervisors demand from you to work as if you had six hands, but you have only two and if you are not able to finish your tasks, they scold you and scream at you. Even people who should not scold you has now the power to do so, only because we are migrants and we can’t complain, because either you are fine with it or you can leave. This is what they are using against us and it is not fair, we are all equals. In addition, money is short! We are working just to survive; it is not ok working 200 hours per month to get such a small amount of money, like 800-900 euros. Once you have paid the rent, which is incredibly high, what is left of your salary? It would be more convenient to steal or to sell your body. It is not right. When you explain these things, everybody says, “these migrants, always mad”. Yes, but there is a reason for it!

Then, we also use dangerous products and they do not even give us masks and gloves, or glasses… If you get sick, they tell you that you are faking it. It is not good the way in which we work, like animals. If you fall ill, it takes months to recover, because you use dangerous things and products. We are modern slaves and it is not good. We thought slavery was finished but instead it’s still in the working places. All these things must end. Even taxes that we pay, the residence permit that we have to renew and that in the end you do not get and you wait for it at home and you can’t even go to work because everything is bound together! Permit and work, permit and residency, in the end you cannot go on, you can’t go back, you are there in the middle as if they had stopped you with a chain that does not allow you to move neither forward nor backward. This is not life.

But we are still there, with our heads held high, and not keeping our heads down.

TSS: One of the claims of the global strike is a European residency permit, unbound from work, income and family, what do you think about it?

A: Ah, I think that if there were a European residence permit it would be the best. I had to struggle to get the more stable residence permit, paying a lot of money. Having a European permit would make it easier, also for those who are looking for a job because through it they could finally find a job to move forward. I have many friends who cannot work only because they do not have the permit. A European permit would be a great thing, damn…