#Globalwomenstrike / Inside the Chains of Care. Voices from Austria 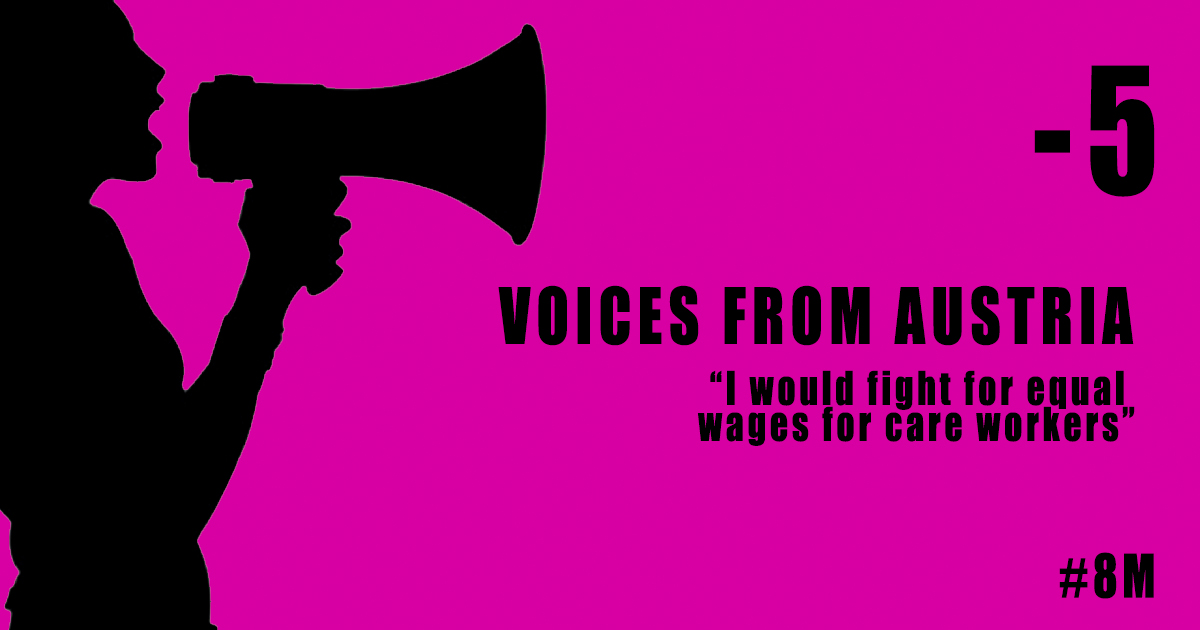 Towards the global women’s strike of March 8th and 9th we publish today the interview made by Romina and Flavia Mattei, Romanian feminists active in the struggle of care workers, to Roxana, a Romanian domestic worker that has been assisting elderly for 22 years in Austria. Roxana’s experience shows clearly how the transnational chains of care are based on sexual and racist hierarchies. While domestic workers are necessary in Austria as in the other European countries, they live in a situation of isolation, with low wages and exposed to sexual harassment by their patients. Like Roxana hundreds thousand migrant women working in the houses find daily the way to say no to the conditions in which they seem to be forced.

Romina and Flavia Matei: What do you do for a living? How have your working and living conditions changed in the last years?

Roxana: I work in the field of intensive domestic care, I take care of seniors in their own homes.

My living conditions have improved over the years. With the wages I earned, I managed to fulfill part of my wishes and aspirations, so I’m satisfied in this regard. And, thanks to the fact that I have a wonderful family, my personal life was not affected by my job.

About the working conditions… What can I say… It is getting worse and worse. The demands in this field are constantly increasing. We are required to have more and more qualifications for a job that is officially listed as unqualified. Those who are not part of this field can’t possibly understand. For us, the people who work in it, this is the sad reality.

Does being a woman and migrant affect how you are treated at work? How?

R: The fact that I’m a woman, no. This work is mainly performed by women, mostly because taking care of the household is also included in our responsibilities. However, the fact that I come from an Eastern-European country has definitely been a problem! I’m not sure if I can put it into words, but you sense the way you are labelled. The families we work for are supposed to ensure housing and meals for us. Many times the quantity of food is the bare minimum. If you try to complain, we are told that in our own homes we wouldn’t have more to eat anyway. Our rooms are small, they often house us in storage rooms, where they store their old things. Our luggage is often larger than the wardrobes available to us, so we just keep our things packed. They give us the bed sheets that are too old for them to use… and these stories can go on. So yes, there have been cases in which I felt marginalised.

Have you ever witnessed or experienced any kind of sexual harassment, for instance in your workplace or even in your family or in the street?

R: I have mostly cared for men or couples so yes, I experienced sexual harassment. Men, even if old and helpless, have the tendency to harass. I can’t say there were extreme cases, but they tend to touch your bottom, your breasts.. The touches seem at first innocent, unintentional, but when it becomes a habit, it’s disturbing and you have to take a stand. I had to change workplaces in the end, because once I made it clear I am not a sex toy and they’re not allowed to do this to me, they turned mean, saying I think too much of myself. Often, the family took the patient’s side. So I left.

Have you participated in any struggle recently, for instance concerning some specific policy enacted by your government or in your workplace? What were the results? Which obstacles and limits did you face?

R: No, I have never taken part in protests until now. I think I lacked the courage.

Have you ever heard about the struggles that women are organizing all around the world to fight against male violence, cuts on welfare, limitations and ban of abortion? Do you know that in many places in the world they organized a women’s strike in order to demonstrate their role and force within society and to claim for an end to men’s violence?

R: Yes, I have heard about some of them. But I was never able to join them. I never had contact with such situations, I didn’t know any women part of such projects. Maybe, to some extent, I was also indifferent.

If you could strike, what would you strike against? And how?

R: How… I don’t know, I simply don’t know. But I can tell you what I would fight for. I would fight for other care workers like me, so that they’re aren’t treated as intruders anymore. Things should be quite simple: Austrian families need care work and we offer these services. If this work was done by Austrian citizens, would they also be treated the way we are being treated now? Definitely not! I would fight for wages equal to Austrian citizens. We are offering the same work, why are our wages so different?! I would fight for fair employment contracts, with clearly stated clauses that are not open to interpretation. And I would want to make sure that all women and men in this field are respected, that their work is respected. We, the care workers, look after the ones that raised you. We make their senior days lighter and more beautiful.

What would you say to all those women around the world who daily face your same problems in the workplaces, at home and in society?

R: What would I tell them… I would tell them to not do as I did: to not be indifferent. To have the courage to talk about their problems, about the traumas in the workplace.