#Globalwomenstrike // Together to Break the Silence. Bulgarian Nurses In struggle 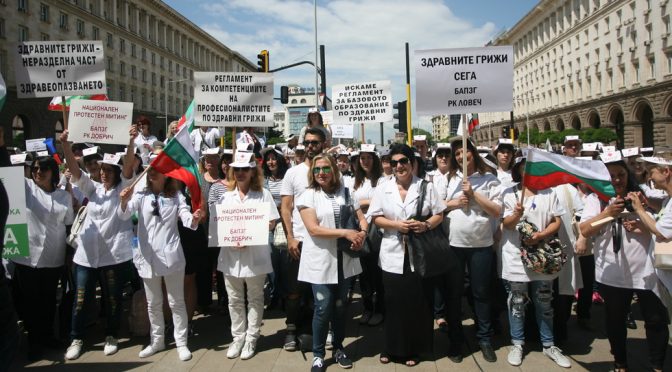 We publish the interview of Kalina Drenska to the Bulgarian nurse Nina Georgieva, who has taken part in the struggles of the nurses and medical staff started last year on March 1st. This dialogue inaugurates a series of interviews that we will publish daily as a countdown towards the global women’s strike on the 8th and 9th of March. This year we will share the voices of women workers from different countries all over the world in order to provide a picture not only of different conditions of life and labor, and of different experiences of struggle, but also of how they intersect within the frame of the patriarchal organization of global society, which in turn show the reasons why we need a global women’s strike. Today in Bulgaria a new mobilization will begin in order to reclaim the improvement of working conditions, a pay rise and welfare for all, against the corruption and cuts of the Bulgarian healthcare system. Excessive workloads, insufficient wages, useless governmental reforms: all this pushes many nurses to leave the country and work abroad. The experience of the Bulgarian nurses is the other side of the process of dismantlement of the welfare and healthcare system of the European countries, sustained by the low-paid or unpaid work of women, often migrant ones. A situation exacerbated globally in times of a sanitary emergency, that is increasing the workload on the shoulders of all the women working in the health and care sector. The protest of the nurses does not limit itself to the claim of better working conditions and wages but contests the transformation of welfare into a privilege for the few.

Kalina Drenska: What field do you work in, how many years have you been in it and how have the working conditions there changed during this time?

Nina Georgieva: I have been working as a nurse for almost 30 years and during this time I have worked in different hospitals. I am from Ruse and I have worked in the hospital there for 18 years. For the last 10-11 years I have been situated in Sofia and have worked in various hospitals here. I love my profession, however, during these 30 years of practical experience I have seen all kinds of attempts for healthcare reforms and I don’t see any positive results from them.

KD: Can you tell us more about the working situation of nurses in Bulgaria – what is the salary, how long are your shifts, how many nurses are usually present during one shift?

NG: The pay is incredibly low and insufficient – according to our collective contract the salaries should be 950 lv a month [or about 475 €] but such high salaries are being paid only in one or two private hospitals in Sofia and even there not all medical specialists get that much. In some places outside of the capital or the major cities, salaries can get as low as 600-700 lv [300-350 €]. It is all talk and promises that we will get our wages raised, but so far nothing significant has actually happened in this regard. The length of the shifts depends on the hospital. There are regular shifts and there are 12- hour ones. You have to make up your monthly working hours – 160-170, which can get to even 180 hours sometimes. We also work night shifts that are incredibly low paid – we literally get cents for them. There were protests for the increase of the night labour rates lately but nothing changed. In some hospitals you get 1 lv [50 cents] for every night hour you work, but even that is very little [for reference – currently the general night work hourly rate in Bulgaria is 25 st or about 12,5 cents]. This is night labour, you give 12 hours of your night! At the same time you are responsible for 30 patients and you are working the shift alone. This is horrible! Speaking about that – I just finished a night shift where I took care of 31 patients! There are very few nurses left; because of the low wages and the awful working conditions there’s not enough of us. A lot of medical specialists get their education and skills here but they don’t stay in Bulgaria. They go to work abroad because they do not want to work in such miserable working conditions. There have already been cases of deaths at the workplace but nobody talks about it.

KD: These are some of the reasons for the nurse protests in Bulgaria. Can you tell us more about the protests – how long have you been protesting, how do you organise?

NG: The protests for better working conditions for medical specialists started a year ago. The first national protest was on March 1st last year [2019]. We organise through Facebook – it all started from our common Facebook group for nurses and medical staff. Many protests have been held in different towns around the country. I attended those in Sofia and one in Ruse. I notice that my coworkers throughout the country are very scared – they are afraid to go out, protest and share their opinion. I do not understand their fears – we have to be able to freely say what we think, we cannot be repressed. There is silence because someone up in the hierarchy has forbidden protest talk in the hospital corridors. Above all, I am a person – why do I not have the right to express my opinion?

KD: What have the protests accomplished so far – has there been an increase in hourly wages and salaries?

NG: At some hospitals there have been very minimal increases, but this is far from enough. We had meetings with Prime-minister Boyko Borisov, with Minister of Health Kiril Ananiev, but all we got from them was promises – nothing in particular happened to improve the working situation of nurses here. At the same time, this past December a new union was established – the Union of Bulgarian Medical Specialists. There are structures around the whole country – in cities such as Sofia, Sliven, Haskovo, Varna and others. The protests continue – on March 1st this year we are starting an ongoing protest and we are hoping that this time our demands will be met.

KD: In other places of the world nurses are striking in order to achieve their demands for better salaries and working conditions, but so far there haven’t been any effective medical workers’ strikes in Bulgaria. Do you consider such actions in the future?

NG: At some point, we are probably even going to strike, but we shouldn’t forget that we are in Bulgaria and people are afraid. I personally have had coworkers telling me that we shouldn’t speak much about protesting because the hospital manager has forbidden it. Others think that someone from outside has to come so things can get better. Who is going to change the situation from the outside? No one!

KD: What kind of reforms have taken place in the last 30 years in the Bulgarian healthcare system and how have they affected your job?

NG: In my opinion, there have been no reforms with positive outcomes for us.The healthcare in Bulgaria is completely commodified. The talk is always about money, financial profits and clinical pathways because Bulgarian hospitals are forced to operate according to the principles of the free market and be profitable. Right now, our salaries depend on the number of patients that are being treated in different clinical pathways, which basically means that we depend on more people getting sick, since this is the only way the hospital can get funding from the National health insurance fund (NIHF) for the pathways. We don’t get the full value of our labor, it is up to the hospital management to decide how to redistribute the money that the hospital receives for the clinical pathways – for supplies, for bills, to cover the indebtedness of the hospital. The rules and regulations on how to spend and distribute public money are not very clear and there are many violations and frauds. The control on how public money is being spent is low, the penalties one gets in cases of corruption and misuse of power are insignificant. Patients have basically been turned into clients – they are not being treated as ill people who need help and care. Private clinics and hospitals are popping up everywhere (with the blessing of the Minister of Health) – to run a private hospital or medical centre is currently the most profitable business in Bulgaria, because such hospitals also get public money from the NHIF. There is one thing I know for sure: as long as hospitals are forced to operate on a for-profit basis, there is going to be theft, corruption and abuse of public money. This is why we, medical specialists, are against these for-profit practices in the healthcare system. The central demand of our protest is to stop treating healthcare as a profitable industry. We are living people – our health is not a commodity.

KD: Right now there are ongoing protests and strikes of nurses around the world – in the USA, in France, in Germany. What is your message to your colleagues in Bulgaria and other countries?

NG: Dear colleagues, don’t be afraid! Leave that comfort of your couch at home and fight for your rights! The government finds it very convenient when we do not bother them with our demands, when they do not have to change anything, when we keep calm and quiet. Enough with this! Enough obedience and compliance! Let’s speak up – power comes through unity!