#Global Women Strike / We Strike for Equal Wages and to Strengthen Each Other! Voices from Georgia 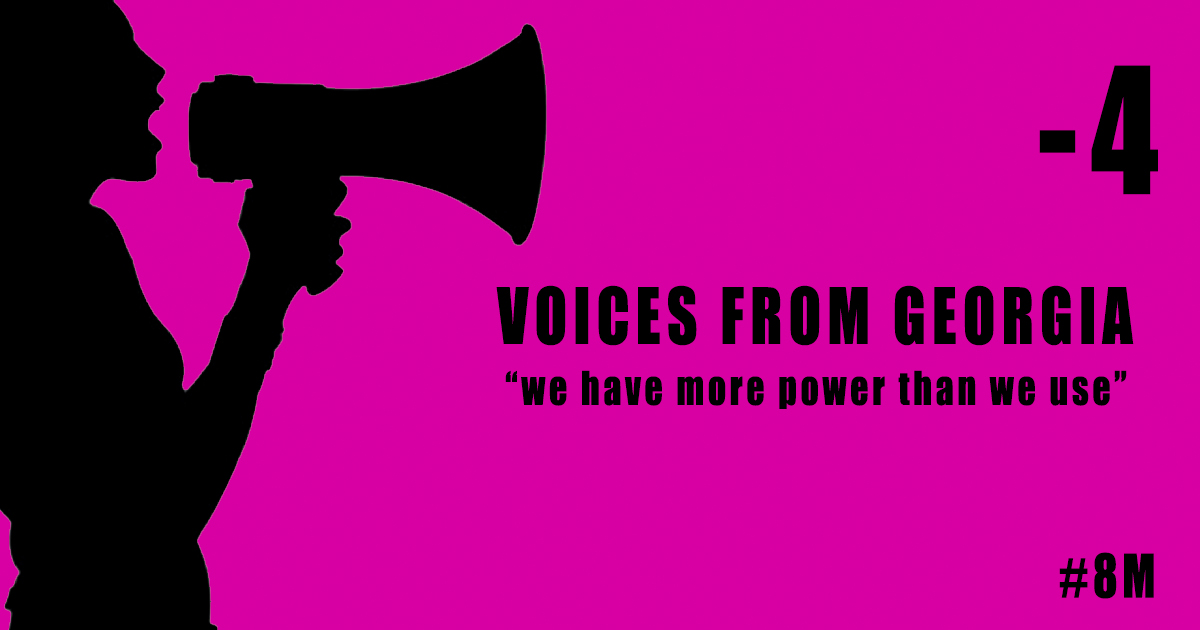 Interview to NJ and MC (Georgia) by TSS Platform

We continue the series of interviews towards the global feminist strike (read #1, #2, #3, #4) with an interview to two Georgian women workers. The dialogue discusses the experiences of life and struggle of the nurse NJ and the social worker MC. NJ and MC show how in these years nurses and social workers in Georgia, who are predominantly employed in the shrinking welfare and healthcare sectors and often have experiences of migration, have been increasingly fighting and striking against exploitation, discrimination and male violence. The strike represented for them also the answer to fear and patriarchal oppression.

NJ: Working conditions have gotten better in some sense since I have been fired, and now I have a job with a better salary with fewer duties since I have transitioned into a supervising position. I don’t miss nursing at all. It’s so much work. I actually feel that I should be paid less than a nurse since nurses do so much more than supervisors and it’s more labor-intensive. My living conditions are worse because I had more money a few years ago. Yesterday my power was cut off because I couldn’t pay. My mother’s health has gotten worse, and I end up paying for her healthcare. Despite the fact we have state insurance – it was 4 surgeries and medications, and it was 3,000 lari that we had to pay since the state health insurance doesn’t’ cover all of it. I started thinking about leaving Georgia again to work abroad.

MC: Social worker. I am currently working as a child advocate.  My working conditions have changed for the better since the last two years because the structure is much better. I have normal working conditions, I am not paying a huge part of my salary for work like phone bills, transportation, cartridge, and paper because I used to have to do that when I worked as a social worker for the state agency. I also had odd working hours. My living conditions have not improved in any way, it’s worse. Because of inflation, it has gotten worse – everything costs more. At my current work, my health benefits have not improved, my employer does not think that they owe their employers to have health benefits. Most of the cost comes out of my pockets when I go to the doctor – I pay more now than I was paying as a social worker for the state agency. Even though I have higher wages now, I still don’t feel that my living standards have improved due to the high costs. I just have more free time after 18:00.

NJ: I don’t feel like they treat me differently because I am a woman at my current job.  The last job I felt it more. There was discrimination against nurses (who are mostly women) like they were slaves. We couldn’t even go from one area to another without permission.

MC: As a woman I have been treated differently, especially when I was young 22-23, I had to work with law enforcement because of my work, correspondingly, they treated me as a little girl, and told me “little girl can’t do this kind of work.” They always flirted with me. They never believed that I, as a woman or as a young woman, could do my work competently, and they triple checked my work. These kinds of structures I had to deal with – especially law enforcement agencies are very patriarchal.

NJ: The person that got me my last job, wanted me to have sex with him in exchange. First, he asked for money and then sex. I refused. In the 90s, policemen used to stop and give rides when there wasn’t public transportation, so I trusted him and got in, and he didn’t stop. I protested, and he stopped the car and let me go. Another time, in front of my eyes, a girl was (bridal) kidnapped in front of me, she was protesting, screaming. I called the police and the police said, “It’s none of your business.” When I was younger, there were families where the head of the house wouldn’t let the women stay in the same room when other men would come over. If they did, they would be in trouble.

MC: I don’t consider myself as someone who was sexually harassed. My coworkers felt very harassed in these law enforcement agencies. The benefit recipients were also sexually harassed, the state investigator themselves would sexually harass the recipients who were women. They would ask what they would do at night, is she free at night? The women felt very uncomfortable since it was about inspecting their children’s living conditions and already felt panic and fear, so they would be obliged to not protest and nod their heads. They felt very uncomfortable. They wouldn’t dare to do that to me because I came off very strong. But others who were more polite, they would routinely harass – make them talk about their families, who was their husband, call them at night. The women would try to avoid these men as much as possible. There is no way to report any of these.  It falls upon the woman to protect themselves since the employer won’t defend them. The women who are stronger would routinely be told how they felt bad for the families they were married into/or would be married into since they were “difficult.”

NJ: I have always protested something in my life. I have always objected against injustice – I am on the side of the oppressed. I helped lead the protest against the illegal firing of 89 nurses at my last hospital. I am currently in a lawsuit against the hospital. The obstacles I face is that a lot of people used to be friendly with me, they have severed communication with me so they won’t be blamed for anything. Not enough people have stepped up to fight with me.

MC: Yes. I organized social workers to go on strike. We faced many obstacles. They said five girls were trying to change the system, and they laughed at us. The health and social minister would say that we had a tone. He apologized to the participants once on behalf of our “attitude.”  Others couldn’t figure out what we were doing, we were trying to further our careers and find lucrative positions in the ministry? They would spread these lies instead of acknowledging that we wanted to improved social and working conditions. We managed to make social work popular around the country – no one knew what our work entailed. There was reorganization at the social work agency. Our 22-point demand – part was satisfied, but in the process, they fired 33 social workers. In general, it was a success because society became interested in problems – social politics which they didn’t care for before. Before this was border control, elections, Russian occupation and so on. But what was left of Georgian territories – no one cared about what was happening here and what work was like here. It seems like poverty is scandalous – it’s embarrassing. They will come out for marijuana legalization, but they won’t come out for social and labor problems because they don’t want to acknowledge they are struggling. They started thinking about social problems. The fact that we have to start from the beginning – Maslow’s hierarchy of needs theory – water and bread are the most important, and we can’t fight for great philosophy without having our basic necessities being satisfied.

NJ: I would strike so women and men have the same wages in the same position – that’s not the case now. I would strike for paid maternity leave, so women don’t have to leave their babies to work. I had a friend who was a doctor, and I think she came back to work right from the hospital – she brings a newborn to work. They don’t have the luxury to leave their children. I would strike so that the power between workers and bosses would be more proportional. I would strike by gathering women – but I haven’t been able to find someone to stand beside me because of nihilism and hopelessness. In order to fight against nihilism is to be able to have success, and I haven’t’ been able to show a success, but if they don’t support the struggle – we won’t have success.

MC: I would strike for social workers – this profession is feminist and most of them are women. I would strike for nurses because they are women and very exploited. I would strike for seamstresses who are women. When we first went on strike, we didn’t know anything at first. Now I have more experience. First of all, I would say you need to connect with these groups and find your supporters who are working there. They would help organize within. I would actively give them information, paint a picture of how it is and what needs to be done. There must be a media campaign because society needs to get involve because workers themselves in these institutions can’t do it alone. Step by step. The first step is to find your supporters. You shouldn’t accept the whole responsibility on yourself – strengthen others so they can do it themselves. Delegate work.

NJ: I want to tell the women around the world to get over their fears, united and go outside and express loudly the injustices. They can fire one of us, but they can’t fire all of us!

MC: I would tell other women that you have a lot more power than you think. We must have unity and solidarity. History teaches us that we have power. Don’t be lazy to work for unity, don’t get overwhelmed by the small stuff that we forget essential problems – it’s hard to work at a job and then go home to do housework, but we have more power than we use. Through strengthening each other and uniting with each other, we can build power and find enthusiasm for one another.