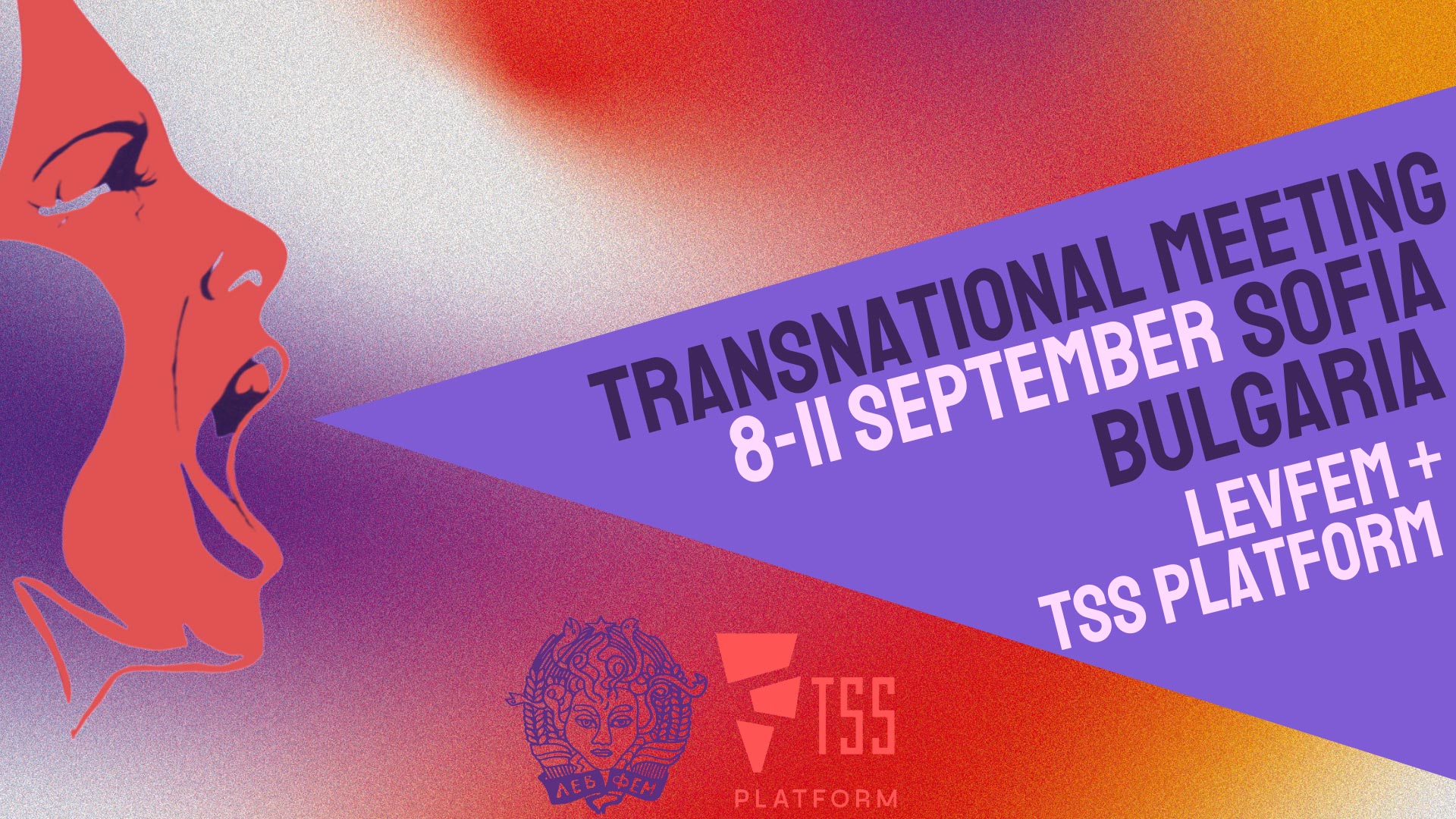 Three years after the previous meeting held in Tbilisi, Georgia, we are happy to announce that the TSS Platform is once again inviting activists, unionists, workers and migrants from several corners of Europe and beyond for a transnational meeting in Sofia, organized together with the Bulgarian feminist collective LevFem.

More than one hundred participants registered so far, from several countries such as Bulgaria, Georgia, Turkey, Slovenia, Bosnia, Romania, Serbia, Greece, Italy, Germany, France, UK, Portugal, Spain, Czech Republic, Azerbaijan, Kyrgyzstan and Austria. Voices from Ukraine, Rojava and from the anti-war opposition in Russia will be present as well. You can still register here: if you wish to attend please do it soon in order to facilitate the organizational process.

Seven years after our first meeting in Poznan, the meeting in Sofia will be the occasion to further pursue one of the TSS main goals: bridge the divide between activists in Western Europe and those in Central and Eastern Europe and affirming the centrality of this region for any struggle nowadays.

The meeting comes in turbulent times. After the pandemic and in the midst of an escalating climate emergency, the war in Ukraine is exacerbating social and reproduction crises and creating a new scenario in which and against which we need to fight. The capacity to build an autonomous stance in front of the third world war, resulting in the increase in costs of living, militarization of politics and global realignment, is the challenge in front of us.

Since its first steps the TSS Platform has fostered transnational processes of organization. These have not stopped during the pandemic: from supporting Amazon workers’ struggles across Europe to the promotion of the feminist network E.A.S.T., from the backing of the Transnational Migrants Coordination to the recent formation of the Permanent Assembly against the War, we worked hard to make a transnational perspective on struggles and events possible.

It is exactly in these turbulent times, and against any attempt to renationalize politics, that it is urgent to come together to share experiences and visions in order to develop collectively a transnational strategy, based on common discourses and practices.

While we acknowledge that transnational communication among groups and comrades has never stopped, as TSS Platform we aim higher: we need tools to organize together and tackle the transformations in production and social reproduction that mark the present, and to imagine future struggles. We understand that when it’s hard to organize locally, it seems even harder to organize transnationally. But we keep thinking that this is a passage we cannot avoid: we are enmeshed in transnational processes and only actions rooted in an understanding of these processes can be powerful enough to bring a radical change. For us, this means to recognize the relevance of the European dimension and the specific role of Central and Eastern Europe within it, and to look at what happens at the borders of the EU and beyond.

The meeting in Sofia will be a step in this direction. The program includes seven workshops, three plenaries, a movie screening and moments of sociality across different sites in Sofia.

After a welcome and collective dinner on Thursday, September 8 (17:00-19:00), in the morning of Friday, September 9, workshop n.1 (11:00-13:00) revolves around Essential, migrant and feminized labor in the Bulgarian case. Is there a local context that can be really separated from the transnational dynamics that mark our present times? What can we learn collectively from the struggles of women in Bulgaria for better working and living conditions? How can ‘local’ struggles be empowered via a transnational dimension? And how to develop wider connections and possibilities? Following the method of previous TSS meetings, we open the floor with an event that addresses the intertwinement of the local and transnational dimension in our struggles.

After lunch there will be two parallel workshops (14:00-16:00). Workshop n. 2 deals with EU enlargement, wage politics and transnational workers’ organization. This workshop goes into current developments of European labor regulation policies, including the recent minimum wage directive. The workshop takes the EU integration as a process that has not just ‘enlarged’ the existing EU but created new conditions for both EU and associated countries, such as Georgia and Ukraine. In times of war policies and alleged clashes of civilization, to ask if workers really need the EU is as scabrous as necessary. But to ask this question without any nationalistic nostalgy is fundamental. The impact of EU policies on labor, which is often overlooked, is strictly related with other issues such as migration and social reproduction. To engage in such discussion means to construct the capacity to go beyond the existing limits of workers’ initiatives and lay the basis for new common struggles while rejecting the sirens of the nation state.

Workshop, n. 3 on The streets for protest not for living, homes for living, not for profit! Organizing for housing justice from the local to the regional to the transnational! will focus on housing struggles, moving from the experience of the housing justice movements in Romania. The workshop will promote an exchange among activists and workers in order to connect housing struggles as a part of a transnational struggle for social justice against the worsening of housing conditions, rising inflation and the increase of energy prices accelerated by the war in Ukraine.

The Friday program continues with the first plenary on Social reproduction struggles in Central and Eastern Europe and beyond (16:30-18:30). The assembly, organized by the E.A.S.T. network, will be a moment to discuss how the specific context of CEE has been shaken by the Covid pandemic and the war in Ukraine, prompting a patriarchal, capitalist and racist backlash against women, LGBTQI+ people, workers and migrants. In addition, the assembly will track and take stock of the many experiences of struggle to find common terrains and advance new possibilities for transnational organizing.

The screening of the movie The Loud Spring (19:00-21:00) concludes Friday’s program, introducing one of the topic of the following day: there is no such thing as green capitalism.

The program on Saturday, September 10th, includes two slots of parallel workshops. In the morning (10:00-12:00) workshop 4 is on Turning social reproduction upside down: crises, patriarchal violence and transnational struggles. Starting from the experience of the E.A.S.T network, the workshop will discuss how to tackle patriarchal violence and anti-gender discourses and how to further reinvent the feminist strike, particularly considering the struggles emerged during the pandemic and the new context produced by the war. Workshop 5 is organized by the Transnational Migrants Coordination (TMC) on Migrant struggles against exploitation, racism and patriarchal violence in the war context. We witness a clash over mobility: while for migrants it represents a part of their struggle for a better and safer life, States and employers seek to govern the movements of migrant labor for the sake of profits and production. The workshop will discuss policy developments and forms of struggle along three axes: migrant labor, border regime and institutional racism. All these axes will address the conditions of migrant women, particularly in the context produced by the mass movements of Ukrainian refugees.

The second slot (13:30-15:30) includes workshop n. 6, that discusses the international cycle of struggles of health- and care-workers during and after the pandemic. This workshop is promoted by Angry Workers (UK) and will be participated by health-, care- and essential workers from different regions, discussing how to connect struggles for a fundamental change in society. Workshop n. 7 on Climate class conflict in the green transition focuses on the so-called green transition as a field of struggle affecting labor and social reproduction, rather than a solution to the climate crisis. This means to connect environmentalist struggles and debates with the geostrategic shift produced by the politics of war, with changes in production and with workers’ struggles.

The final event on Saturday, September 10th, is the plenary organized by the Permanent Assembly Against the War (PAAW) on the challenges of a transnational politics of peace (16:30-18:30). This assembly will be a crucial moment in these times of war. The assembly will be the first physical meeting of the PAAW after four online assemblies that gathered hundreds of people since the Russian invasion of Ukraine. The political initiative of the PAAW aims at creating the conditions to respond to the shifts and changes produced by the war in Ukraine, understood as a transformative moment in the ongoing Third World War, and to reimagine a transnational movement within this context. The discussion will refer to the Manifesto for a Transnational Politics of Peace written by the PAAW and translated into nine languages, including Ukrainian, Russian and Chinese.

A free night on Saturday will be the occasion to get together and chat and mingle over food and drinks.

The meeting ends on Sunday, September 11th, with a final plenary on Transnational Organizing, Strategies and Future Initiatives (10:00-13:00). Its aim is to reach some common points and commitments in order to make this meeting an important contribution for collective struggles.

We look forward to meeting you in Sofia and to common struggles!