EAST Joins the Call for a Transnational Migrants’ Struggle on May 1st! 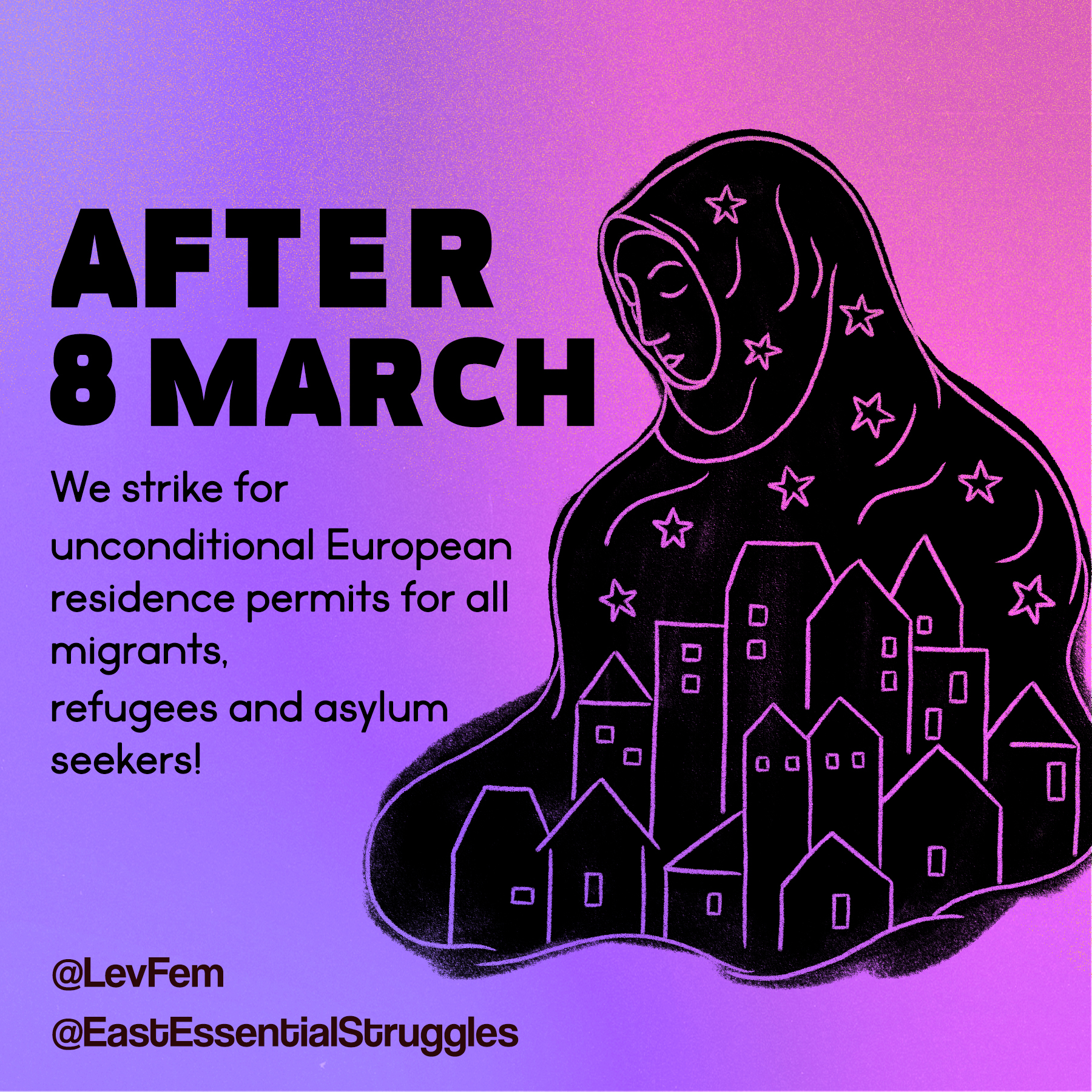 EAST responds to the call for mobilization launched by Transnational Migrants Coordination on May 1st, for an unconditional and unlimited European residence permit, higher wages for every migrant worker, against institutional racism, exploitation, border and patriarchal violence.

EAST acknowledges that migration from Central and Eastern Europe to Western and Southern Europe is key to the transnational organization of social reproduction today. Migrants from Eastern and Central Europe, especially women, are essential for sustaining the care sector in countries such as Germany, the UK, Greece and Italy. At the same time, care work inEastern countries is lacking  workforce, forcing elderly women to continue working as nurses, caregivers and social assistants way after their retirement or to take care of their grandchildren at home while the parents are working abroad. Seasonal workers, construction workers, logistic and transportation workers from the East who migrate to the West are in a similar situation.

To struggle against the capitalist, patriarchal and racist tenets of social reproduction, we need to build connections between those who stay and those who leave. One of the main legislative tools to prevent the formation of these connections is the differentiation between the migrants who need a residence permit and those who don’t, but are nonetheless equally subjected to institutional racism, excluded from welfare benefits, and employed in devalued and low-paid jobs. In order to foster these connections, the EAST network participates in the day of migrants’ struggle and strike, and share the call to transnationally link  our struggles against institutional racism, exploitation and patriarchal violence.

Firstly, we know that for migrant workers, freedom of movement inside the Schengen area is a way to escape the exploitation in their countries of origin. While we look for a better wage and life, EU member states and institutions respond with recruitment agencies, posting of workers, seasonal and temporary mobility that isolate migrant workers, limit access to social benefits and push down wages. In this way, even those who are EU citizens and should in theory be treated equally with other EU citizens, have to fight against systemic racism and criminalization and are compelled to work under unacceptable conditions in factories, warehouses, houses, hospitals and fields. In this way, migrants and locals, EU and non-EU migrants, newer and older generations of migrants are pitted against each other, and at the same time divided from all the other workers. We refuse any distinction between good and bad migrants, economic migrants or asylum seekers. We fight against all means through which the migrants’ essential labor is degraded.

Secondly, EU pacts, like the new one on migration and asylum, bilateral agreements such as the ones with Turkey or Libya, or the association agreements with countries like Georgia, which extend EU rules outside EU borders, as well as national laws on migration, aim to govern mobility and strengthen exploitation. Different legislation is applied to migrants who are ‘classified’ according to origin, imposing a stratification and hierarchization which affect working, wage and living conditions. This system weakens us all: the blackmail of the residence permit used against non-European migrant workforce is a way to keep wages low for everyone. We need to overthrow this mechanism of fragmentation by fighting together for a European residence permit for all beyond and across national borders.

Third, we know that the migration agreements between the EU and countries such as Turkey, Libya, Morocco, and the terrible conditions in the refugee camps in Greece, along the Balkan Route or in Northern Africa expose migrant women to rape, harassment, male and state violence. Once women enter the European borders, their residence permit is tied not only to the work contract, but in the case of family reunification, also to fathers and husbands, even when their partners are violent. The violence of the borders and the patriarchal nature of the residence permit regulations is part of the same system that treats women migrating from Eastern and Central Europe as a cheap labor force “naturally” destined to domestic work. Every struggle against patriarchal violence and the degradation of women’s essential labor must be at the same a fight against institutional racism and its backlash on women and LGBTQIA+ people. Thus we respond to the call for migrants’ struggle and strike on May 1st and we claim: healthcare and welfare for all migrants; freedom of movement; better working conditions; housing and higher wages for those who stay and those who leave.