#Globalwomenstrike // Together Against Violence and Privatizations 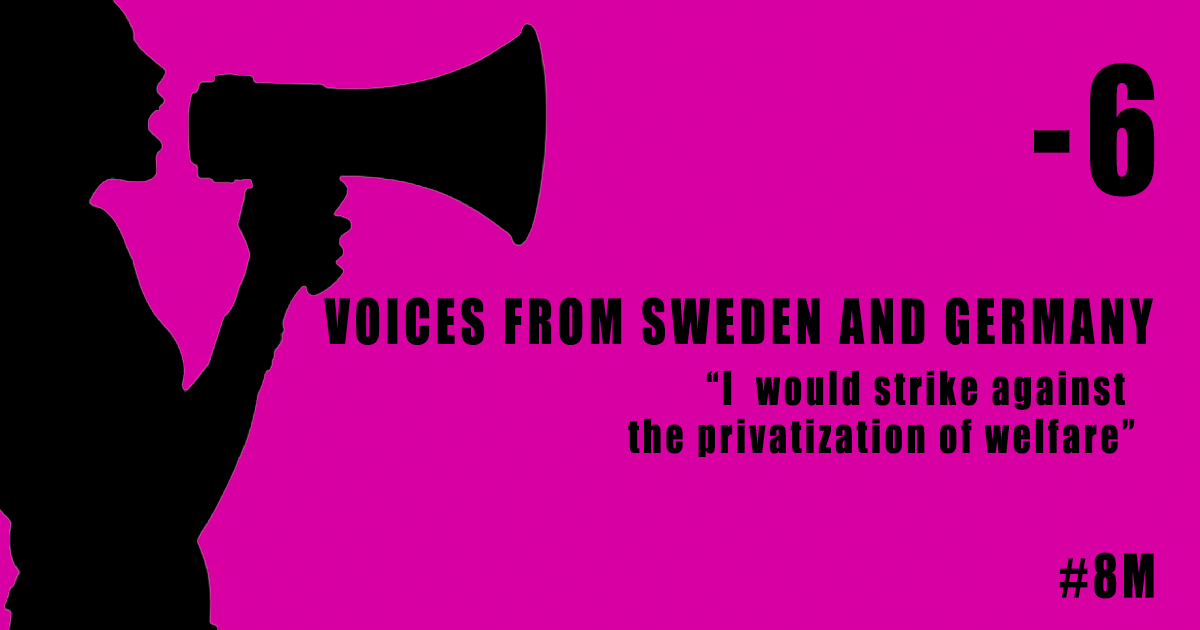 We interviewed Katja Raetz, a Swedish nurse, and Charlotte Ruga, a German midwife within the series of interviews toward March 8th and 9th (read here interview #1 and #2). Katjia shares her experience as a care worker and as a woman in one of the supposed bulwarks of welfare state. The dialogue shows how also in Sweden the neoliberal attack to the healthcare system corresponds to the increase of nurses’ workload, a job that is mostly performed by women. The same erosion of the welfare system is condemned by Charlotte, that highlights also how when you perform a job such as the midwife the supposed ‘vocation’ you have to have as a woman is used to make you accept low wages and bad conditions. The ongoing struggle and growing movement of health care sector workers does not only concern their specific conditions as workers and women, but also the treatment of the patients, paving the way for new common struggles.

KR: I am a RN (registered nurse), specialized in care of the elderly, working at a health care center in Stockholm region, which is part of the primary health sector in Sweden. I have worked at different health care centers and it´s quite apparent that during the last years the pressure to “produce” care and the “right” form of care has increased. In Stockholm region the health care sector has been the aim of neoliberal politics which is characterized by privatization, a lack of planning for the needs of the population and staff, and at the same time detailed control of the work which added a lot of administration to our work.

CR: I work as a midwife in a hospital in Munich, Germany. I just finished my training 1,5 years ago. During my training I experienced that the lack of staff caused us trainees to be cheap employees. At a very young age I got used to be constantly tired, overworked and under a lot of pressure to not make any mistakes. Especially in my job people always think it’s a gift to do it or that we do it because babies are so cute – well, guess what, we need to make a living like anybody else and being devoted to my work of course is a beautiful thing to have, but it also gives reason for material differences. This is something that happens in many sectors that employ mostly women: In the hospital, in nurseries, in schools – and as mothers. What we do is not being taken seriously and therefore linked to worse working conditions. With the feminization of the working class the inequalities between men and women have become even more obvious. The Gender Pay Gap in Germany is one of the highest in Europe: 21 %.

KR: The health care sector in Sweden as in many countries is predominantly a workplace for women, especially when it comes to nursing and care but also amongst physicians. That’s the case at my workplace with very few men amongst the staff. In general, I think that it is no coincidence that the health care sector as many other welfare sectors are under threat by neoliberal politics. There was a survey just a few years ago done by trade unions that showed that in professions with about the same level of education typical “male” jobs had higher wages than typical “female” ones.

CR: Since I work almost exclusively with women and for women I cannot really say. I’ve experienced a lot of arrogance and chauvinism from male doctors but that’s also linked to the hierarchies in hospitals. The higher position though are more often staffed with men. I’m not a migrant, so I cannot speak from any personal experience, but the most precarious jobs in the hospital (cleaning, kitchen…) are mostly staffed with migrant workers – that shows the racism of the capitalist system.

KR: I have experienced sexual harassment myself and talked also to colleagues about their experiences. One of the very positive things with #metoo is that it is a bit easier today to talk about past experiences. The common theme between my experiences and what I heard from colleagues is, that the kind of harassment is not so much open violence like rape but more unwelcomed touches, closeness, words etc. which are none of the less very disturbing.

CR: In the street and in personal relationships.

KR: The struggle I´m involved in already during the last couple of years is the situation in the health care sector with lack of resources, lack of staff, lack of hospital beds and at the same time privatization with generates profits for private health care companies from our welfare. Most recently it´s the struggle against the job losses at some of Stockholm’s main hospitals and especially the alarming situation at the emergency rooms which often are overcrowded with patients and creates awful working conditions.

CR: Sporadically there are fights and strikes against the situation of hospital staff, but most people are not organized in unions. Everybody tries to somehow make it on their own since there have been a lot of disappointments in the past. I haven’t been in a strike yet, there will be one this year though. But it’s hard to really get heard as an employee since the unions in Germany are very bureaucratic and the strike is going to be more or less symbolic. This is why I’m organized with some colleagues in a group that tries to politicize the unions – the unions are our organs to strike and we, the workers, should have the possibility to make up our minds what we want to strike against ourselves.

TSS: Have you ever heard about the struggles that women are organizing all around the world to fight against male violence, cuts on welfare, limitations and ban of abortion?

KR: I have read a lot about the struggle for the right for abortion from for example Argentina, Poland and Ireland. I also heard about the movement against femicide which is spreading right now in Latin America. I also think the teachers strikes which have been happening in several countries are inspiring.

CR: Yes, I was especially inspired by the Ni Una Menos movement in Latin America. Worldwide there are women rising up, fighting against their chains. I’m organized in an internationalist socialist feminist group called “Bread and Roses” (Brot und Rosen in German) myself, that is fighting in many countries for a world without oppression and exploitation.

KR: I would strike against the ongoing privatization of the Swedish welfare sector and for a re-nationalization but under control of the staff. Right now, there is also an attempt going on to change the law and make it easier for bosses to sack people without reason. I think that we need a political strike against all these forms of neoliberal politics.

CR: I can only imagine a strike being effective if it’s directly against the exploitation of the big companies that own the world. A political strike, like a women’s strike, has to face the governments that are the safekeepers of a system that oppresses people in so many ways… But also it cannot be effective if it’s not attacking the capitalist system that profits so very much from the oppression of women.

KR: I would say that our struggle belongs together, that we can strengthen each other globally and that we ca win together.

CR: We all feel our chains when we start moving. And a world without chains is possible. There is a history of women’s oppression laying behind us – but it’s also a history of women’s struggles. We are so many, none of us is alone. Get organized, ask questions, join strikes! We all have so much to learn, but so much more to gain!