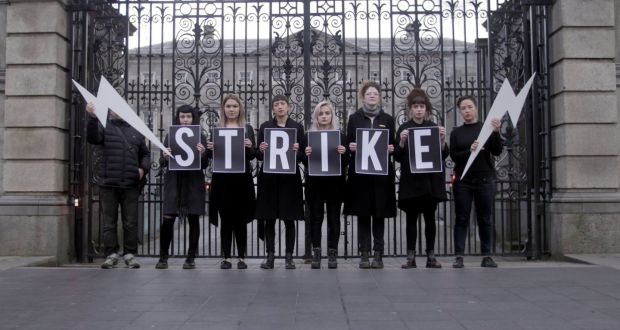 Many collectives and trade unions from Italy, Poland, Sweden, Ireland, UK, Germany, Slovenia and France, who are taking part in the strike of March 8th, met in London during the Transnational Social Strike Assembly, to discuss the novelties and the potential of the global women’s strike as well as its relation with the transnational social strike process.

Throughout Europe and beyond, women are under attack in many ways. Institutional racism and constraints on mobility limit and govern their movements across borders; welfare cuts increase their exploitation both at home and in care and health services.  Profits raise, by reducing their wages, increasing precariousness of work and the amount of time they spend providing unpaid care work due to lack of adequate services. Reproductive freedom is limited everywhere and increasingly under attack, so as to push back women into the roles imposed by the sexual division of labor. However, all over the world, women are fighting back against these patriarchal and neoliberal attacks, and have chosen to strike as the way to refuse their oppression and exploitation. Together with them, also LGBTQIA subjects are using the strike in order to fight against established gender roles.

Women are making the strike transnational. This is true not only because women in more than 40 countries are going on strike, but also and most fundamentally because women as a transnational subject are addressing power dynamics which cut across national borders. If it had simply been a progressive struggle against catholic fundamentalism in a specific country, the Polish strike of last October would not have had such power of contamination. If it had been just a response to a national issue, the tremendous number of femicides occurring in that country, the Argentinian women’s call to organize would not have had such an unexpected echo. Instead, they both were recognized and taken up as a possibility unify the until now scattered struggles  against  neoliberal patriarchy, which subdues women everywhere with different means but the same brutality.

Women are making the strike social. This fact sends a clear sign to those trade unions who claim to have a monopoly on  true and legal strike practice, to those who claim that striking is just a regulated way to negotiate specific working  conditions. Women are showing that the strike can be much more than that. Wage disparities and harassments in the workplace are part and parcel of women’s specific experience of exploitation, which however is not simply a form of discrimination and goes well beyond the workplace. Women’s exploitation includes the fact that reproductive labor is still massively on their shoulders. It is a global social condition which supports the reproduction of the neoliberal order as a whole. This requires the strike to reach the houses, the schools, the hospitals, the metropolitan space in its entirety. The women’s strike is social because it puts into question the overall current organization of society.

The women’s strike is not even simply a strike for political reforms. Legal improvements are asked by many sides and each of them could give more autonomy to women facing violence in all its different forms. Nonetheless, the women’s strike is something more than a campaign to gain universal rights. Its overall enemy is not just this or that law, rather something that is often enforced by laws but occurs also in spite of them: the neoliberal power that demands total availability of women’s body, life and time. The women’s strike is political because women claim for themselves the power to decide and to choose, knowing that no one will simply grant it to them. By this they open the way to all those willing to overturn social hierarchies and gender roles.

The women’s strike is not carried on by a specific category of workers. Rather, through the strike women are actually fighting on the inescapable fields of a class politics: the terrain of work and precarization, the terrain of welfare and its dismantlement, the terrain of freedom of movement. Starting from their specific and partial position, women are drawing a line along which also men  and all those who refuse the neoliberal order must take side. We will continue engaging in organizing, supporting and growing the women’s strike of March 8th everywhere. From now on the transnational social strike cannot but be a feminist practice, not only because women are at the forefront of the strike movement fighting from the specific position they occupy in society, but mainly because only by taking women’s side it is possible to attack the core of neoliberal domination. By refusing through the strike to play «their» part any longer, women are showing how the strike can be transnational and social, that is a global mass practice to overturn the present.

Listen to the recordings of the workshop: https://www.mixcloud.com/PlanCLondon/march-8th-towards-the-global-womens-strike/

Read the TSS call out for March 8th: https://www.transnational-strike.info/2017/01/26/if-our-lives-have-no-value-then-we-strike-call-for-a-global-womens-strike-march-8th-2017/