The Victory of Social Workers in Georgia 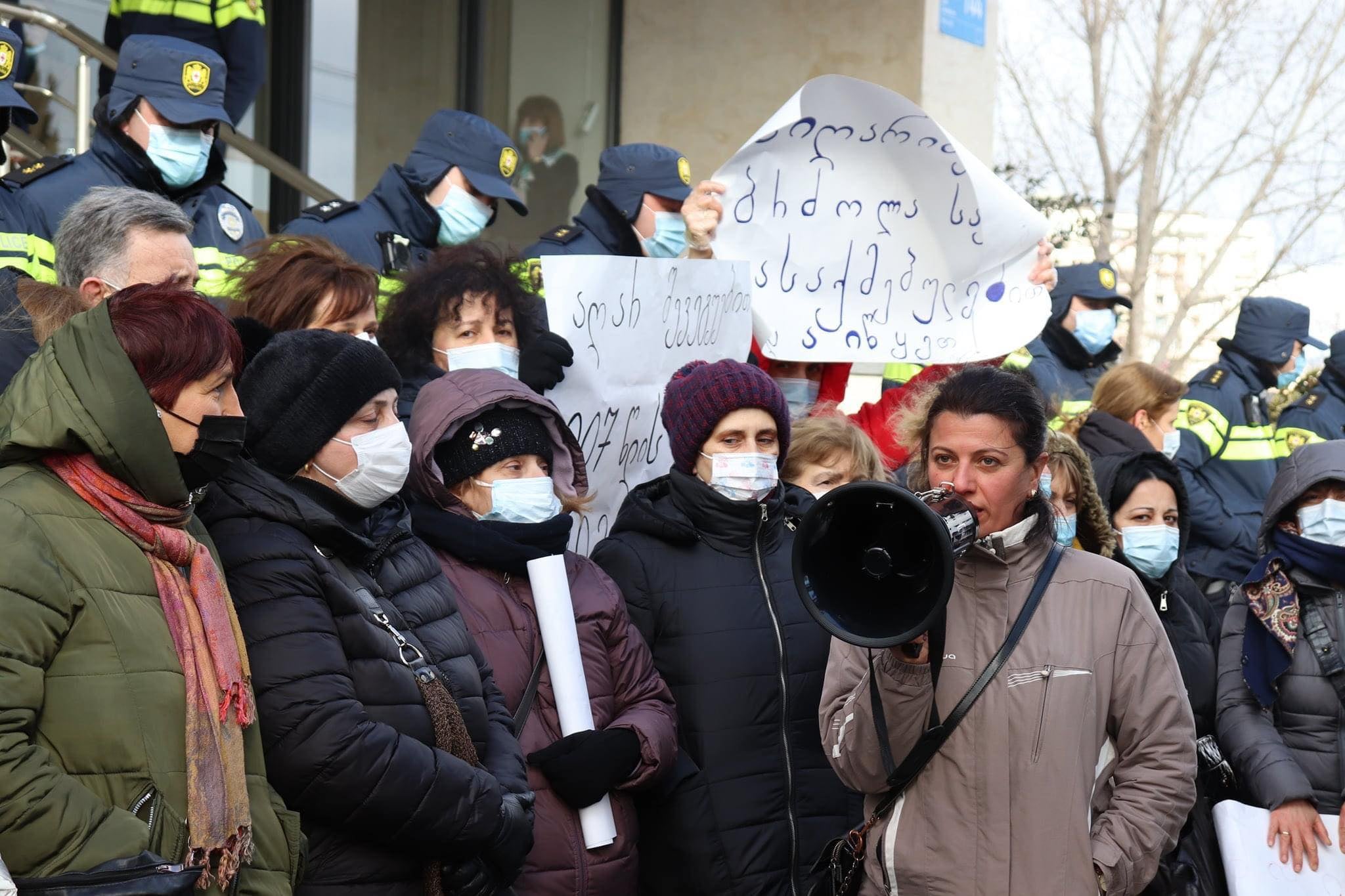 Solidarity Network started organizing social welfare field agents (or you can say social security field agents) three years ago. In 2020, through our union efforts, we won an increase in the fixed wage from 80 GEL to 200 GEL for social field agents (the rest is performance pay). In 2021, we started a labor dispute with the Social Service Agency which belongs to the Ministry of Social Affairs, but this time other professions had joined us and we were 250 employees working in both fields and offices managing both social assistance and pension pay. Strikes are not automatic according to Georgian Law, one must have mandatory 21-day mediation with the employer or employee having the right to extend it longer once and then a three-day notice to begin. In November after the mediation failed and we were on the verge of striking, the deputy minister stated they had foreign experts do an internal study to study the effectiveness of the labor force only for the foreign experts to confirm what our union has been saying: the number one problem was low wages.

The deputy minister unveiled a new plan to increase wages in front of the entire social agency supervisors, including our union members and representatives. She also stated that she knew the one-month contracts we had been fighting against were unlawful, and that they would be replaced with a one-year contract attached to the fiscal year (permanent ones are acknowledged as permanent by law despite one year). We had another meeting to give feedback and told them how some of the wage schemes were not going to be appropriate as well as advocate to delay by one year the laying off of 30 lawyers and others. The Ministry needed time to make changes so we set up a meeting to finalize what the final wages looked like on December 10th. Everyone was waiting with bated breath thinking we were about to reach an agreement when on December 10th all of a sudden, the Ministry pulled out of the meeting. They were nowhere to be found. We were told nothing; we sent a couple of letters trying to get answers. No response. Then we heard the Minister was resigning. We were left in the dark and everyone said, let’s give them until the end of the year to issue an order with the Minister. Instead, the workers all received one-month contracts beginning of the new year and no wage increases besides 10% that the Prime Minister had announced for all public workers a couple of weeks back. Social field workers were also given new orders to complete these low-paid demographic house visits. The workers were outraged that they had been blatantly lied to and disrespected. Reminder that we had sent multiple letters that went unanswered. They were also outraged that they were about to work again with poverty wages after months of negotiations.

We announced the strike on Friday since we needed to give three-day notice, and when I had a brief phone exchange with the deputy minister, I said, the workers aren’t going to stop this strike without real tangible gains and no promises since trust was broken. By Sunday, government news outlets were saying the workers would now be receiving 40-60% wage increases, and they weren’t going to strike. The Ministry didn’t ask us if we agreed to these terms and decided on our behalf to stop the strike. Despite the confusion this brought, the workers were very angry again for this unilateral move by the ministry. Our union went on strike Monday. While we were waiting in front of the Ministry, the Minister told a journalist during a press conference that the wages given were proportionate to the work the social agency workers did. This angered workers even more.  On Monday after we had a lot of media coverage, an official legal document was drawn up by the ministry with wage increases. The fact that it was no longer promises but a done-deal was promising but again done without our agreement. This was also not enough; transportation costs were incredibly important as well as our other demands including 100% wage increases.

The day after, the Ministry gave the social agency four-month fully paid maternity leave in addition to the government one-time payment of 1000GEL. On the fourth day, our union organized a large rally from social agency workers all over the country coming down in front of the government building, demanding to see the prime minister. We heard the bosses were pulling striking workers to work in a handful of centers. Later that day, the deputy Minister said she wanted to meet with us the next day. Ten of us went to meet there, the workers were chosen by the workers themselves. Our main demand was an increase in wages and transportation costs covered. After negotiating, they conceded transportation. Since there is a reorganization plan in the social agency starting from February, the deputy minister said there was no way to get more wages until reorganization was complete. So, they agreed that there would be no layoffs, the main principle guiding reorganization would be not to lay people off but to actually make the agency work better for workers and beneficiaries (in Georgia, reorganization is often a code word for mass firings). There would be no more one-month contracts to confuse workers. They also said they are going to phase out declarations that paid very little, and get rid of the rule that anyone who was on vacation that month would be automatically disqualified from receiving bonuses whenever it was given out. We also stated the ministry did not communicate with us, and to encourage communication, a new platform will be created. Their side would have appointed coordinators to communicate with us properly. They also said they would fully pay strike days. In addition, the ministry took responsibility for managing things badly.

In the scheme of strikes in Georgia, the wins are bigger than most if not all strikes. The ministry hadn’t given these workers any wage increases since 2007. From the side of the Ministry, these were huge concessions:

-We got paid maternity leave.

-Transportation will be the responsibility of Ministry and not individual workers.

-We halted the layoffs for 30 people.

-We removed the limitation to bonus pay.

-The low-paying declarations will be phased out.

-Strike days will be compensated.

-The workers established themselves that they weren’t going to be pushed around anymore. They have certain expectations from the Ministry.

-The workers found their dignity that they had been “taking it” for 15-16 years without complaining and now they say they feel like their self-respect had been restored.

-Unity – first time ever these factions within the agency were united. The different professions and regional/city centers had been warring nonstop, and it seemed almost impossibelt to unite them.

-They met each other for the first time and fought together – they felt solidarity.

-For 6-7 days straight they were in the news on every channel. People finally heard their problems and the public showed empathy which they desperately needed since they are generally loathed by the public since they are blamed for all the social welfare problems in the country.

-We made media talk about wages and workers for the first time non-stop instead of politicians and geopolitics.

-They are an example and inspiration now for others.