Statement in Support of Migrants Stranded at the Belarus-EU Border 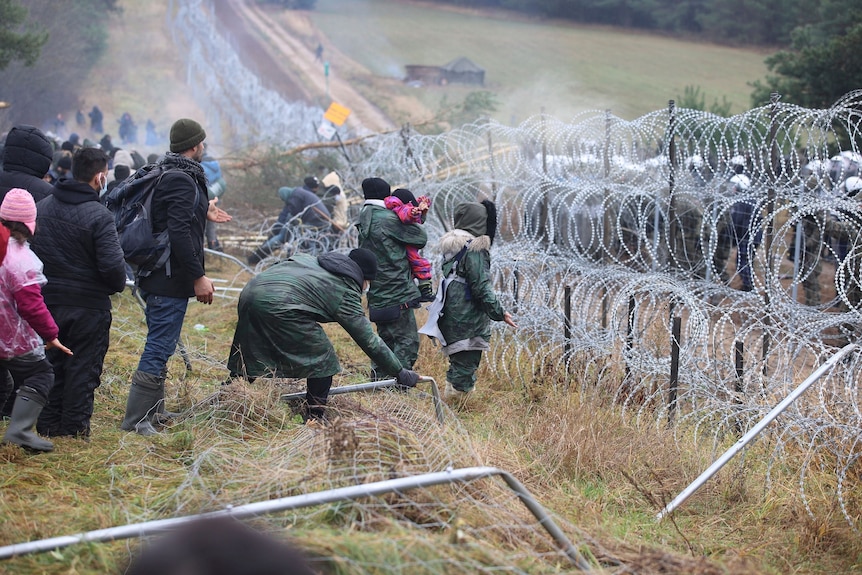 Thousands of migrants are stranded along the border between Poland and Belarus trying to enter the European Union. As we have already reported some time ago, for months the eastern EU countries have become the new routes used by migrants to reach Europe, avoiding crossing into Turkey and ending up imprisoned by the agreements between Erdogan and the European Commission or risking their lives in the Mediterranean Sea. In recent days, however, the Polish government has decided to block them: Poland has set up an emergency zone of several kilometres along the border, employing police and army. Lithuania, the other country of entry, has done the same. This prevents anyone from helping the migrants stuck in the cold in the middle of the forest. Several of them have already died as a result of this blockade. Attempts to break through are repelled with tear gas and barbed wire.

On the other hand, Belarus has cynically encouraged migrants from Iraq, Iran and other African countries to transit in an attempt to reach the EU. Belarus is thus using migrants as a response to the sanctions imposed by Brussels earlier this year. France and Germany, backed by European Commission President Von der Leyen, were quick to lend their support to Poland, condemning Lukashenko as a human trafficker in order to rightfully invoke the strict protection of the EU’s external borders. Thus, while an increasing number of migrants are dying of hypothermia in the Polish forests, Europe has limited itself to describing this unprecedented situation on its eastern borders as an ‘aggression of an illegitimate and desperate regime, capable of committing atrocious acts’. This is a good description of the Lukashenko regime, but it cannot erase the autonomous and legitimate desire of migrant men and women to find better living conditions. In deploying the army on the border, European countries join Lukashenko’s regime in pushing migrants against the barbed wire. Meanwhile they declare the further goal of ‘working with third countries to block arrivals in Minsk’. Although the images coming from the border are terrible, Poland’s brutal reaction to the “migrant threat” and Belarus’ use of migrants as a commodity for political confrontation with the EU are not isolated cases: they are an integral part of a European migration governance regime that now openly legitimises violence against migrants and the systematic violation of their rights and international commitments.

A few examples: in recent days in the UK, the Home Office has quietly tried to amend its Nationality and Borders Bill by introducing a provision giving Border Force personnel immunity if they fail to save lives at sea. This means that no one will be held responsible for deaths at sea caused by the Coast Guard. Croatia and Greece, on the other hand, are using a ‘shadow army’, i.e. plain-clothes units with balaclavas that work together with the police of these countries, to force migrants away from their borders. In Croatia, these units were filmed beating people with sticks on the border with Bosnia, while in Greece they are accused of intercepting boats in the Aegean and setting passengers adrift on life rafts in Turkish waters. The EU continues to finance the defence of the borders of both countries and to reserve millions of euros for countries like Libya, where migrants – who have rebelled en masse in the last month – are detained in detention centres, beaten, tortured and raped.

After years of illegal rejections at sea and in the Balkans, we are now at illegal and pushbacks on the Polish and Lithuanian borders. The EU’s intention to “prevent travel to Minsk” also confirms the role of third countries in European policies against migrants. We know that migrants will not stop, and that European policies, once again, will make travel more dangerous and fill the pockets of traffickers and dictators. In the meantime, demonstrations in support of migrants are occurring and being organised in Poland and Lithuania.

European governments pretend they want to protect migrants by saying they should not leave their countries of origin. But we know that the search for freedom and a better life cannot be stopped, and we will continue to fight together with the many who, even in these hours, are managing to cross the borders. The brutal violence with which the EU and neighbouring countries are repressing the entry of migrants is a response to our mass movement and our demand for freedom. However, we also know that while this violence endangers the lives of many, the very countries that practise it need migrant workers to be exploited. It is therefore not true that violence is used to stop migrants at all costs: what they want is to prevent any freedom of movement and to only allow the passage of a certain number of migrants based on the needs of economy and production.

That is why, while we are on the side of the migrant women and men who – in Belarus as in Libya, in Turkey as in Greece – continue to challenge the European border regime, we are also on the side of those who daily, in the same countries and in every corner of Europe, fight against exploitation and against the blackmail of institutional racism. That is why we want an unconditional European residence permit: for freedom of movement and freedom to stay, against violence and exploitation, and against the interests of traffickers and dictators supported by European policies. We want us alive, we want us free!