From Borders to Metropolis against Racism and Exploitation: from Transnational 1st May towards a Collective Migrants’ Force 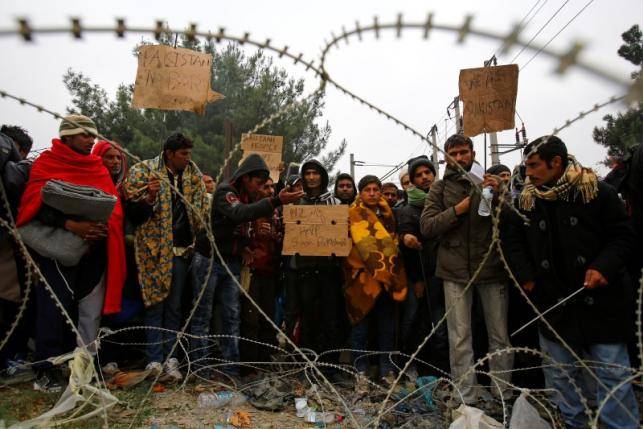 Everywhere we migrants face border violence and brutal exploitation supported by institutional racism. While those who already live in Europe face institutional racism, document blackmail and exploitation on a daily basis, those who want to enter Europe have to overcome the obstacles posed by the border regime, orchestrated by the EU together with third countries with whom it makes deals on our skin. While some of us fight against the bosses to get better wages and working conditions, or against the racism of the Police Headquarters and Prefectures, or to obtain regularisation, others organise themselves in order to cross the borders, fight against oppression in detention camps, fight against exploitation and violence in the countries where they are stranded outside Europe. Behind the difficulties of our daily lives, however, lies a collective force that we must organise.

In these months of restrictions imposed by the pandemic measures, border crossings have not stopped and are even increasing everywhere, even in the UK after Brexit. Faced with this push for freedom by migrants, the EU and its member states respond with border brutality, involving non-European countries in criminal management. The European reaction to the threat of a “new migrant crisis” after the Taliban’s seizure of power in Afghanistan confirms the aim of limiting entry by militarising borders and instructing neighbouring countries to detain migrants and to let go only the workforce they need. We are not surprised by the refusal to accept Afghan migrants – except in small numbers during the flight of the US army from Kabul, or in the form of highly skilled labour – while delegating the management of all the others to third countries declared ‘safe’, even if they are accomplices of the Taliban. The logic of the ‘humanitarian corridors’ being discussed is just another tool that puts in the hands of European countries the arbitrary choice of who must be saved and who must not. The aim of border countries such as Libya, Tunisia and Morocco is thus to keep migrants in sufficiently unlivable conditions – including the violence, rape and torture often perpetrated in detention centres and by border police forces – to discourage those who want to reach Europe. Similarly, last June Europe allocated another €6 billion to Erdogan’s authoritarian, racist and patriarchal regime. The same Erdogan who on 1 July withdrew Turkey from the Istanbul Convention against violence against women, effectively attacking all women and making life even more difficult for migrant women who constantly face violence on European borders. Now the EU is announcing that it wants to entrust the containment of Afghan migrants to Iran and Pakistan, a supporter of the Taliban and for this reason contested by Afghan women, so praised in the West for their courage. The total inability to reject the request made by a dozen European countries to better protect the EU’s external borders with walls and fences, instead leaving the construction of barriers up to the possibilities of each country, confirms Europe’s political will to dramatically stiffen its border regime.

These developments follow the new Pact on Migration and Asylum presented by the European Commission in 2020. In fact, the Pact gives indications to strengthen screening procedures with the aim of selecting as quickly as possible who can enter and who cannot, making the criteria for obtaining asylum more and more arbitrary and narrow. The Pact envisages partnerships with third countries to delocalise the management of flows and externalise the ‘migration issue’ by financing the construction of open-air prisons, investing in the first EU armed corps, i.e. the new European border and coast guard, and encouraging cooperation between Member States in coordinating expulsions and voluntary returns. The political message to migrants is clear: most asylum claims will be rejected even before they formally arrive on European land and many migrants will be detained indefinitely in border-states detention centres.

These political priorities legitimise the now widespread use of violence by all European states to impede the freedom and contain the mobility of migrants by any means. Here are just a few examples: in May, the Spanish government deployed the army on the beach of Ceuta to welcome 6,000 migrants arriving from Morocco with armoured vehicles and tear gas. Against migrants arriving in the Evros region, this summer the Greek state justified the purchase and supply of munitions, M84 stun grenades, chemical grenades and armaments, amounting to €2 million, provided by the EU, and strengthened forms of electronic border surveillance with drones and cameras. To cope with possible arrivals from Afghanistan, Greece built a 40 km wall on the border with Turkey, and Turkey in turn built a 243 km wall with Iran. In light of the increased entry of migrants from Belarus into Poland and Lithuania, the two eastern countries introduced a temporary state of emergency and increased the presence of troops at the border and built barbed wire fences. Everywhere, migrants are seen as instruments of blackmail or pressure to obtain funding and political consensus.

However, Europe’s plan is not simply to build walls and sign agreements with authoritarian regimes, because the migrant labour force is badly needed, even more after the pandemic. Thus, while fortifying its borders, Europe seeks migrant workers through selective policies that generate further divisions. While rejecting any solution for African asylum seekers, Hungary faces labour shortages in healthcare, cleaning services, catering, industry and agriculture by attracting migrants from neighboring countries. Germany is trying to avoid new mass arrivals as in 2015, but the Federal Employment Agency announces that the country will need at least 400,000 entries a year to fill the need for labour in logistics and healthcare. This summer, Italy has reached the highest rate of seasonal contracts in the last eight years, which are underpaid and often irregular. Across the Channel, the United Kingdom, which voted for Brexit against migrants, is trying to cope with labour shortages in strategic sectors such as road transport by proposing temporary and ad hoc regularisations. Whether it is a question of asylum seekers, work or reunification, the logic now dominant in Europe is to violently block and select only those men and women who are deemed useful and deserving but, despite this, are always kept on the verge of blackmail.

In the face of all this, we refuse to be divided into those who have asylum and those who do not, those who are legal and those who are illegal, those who work under blackmail and those who are locked up in hubs, those who are inside the European borders and those who are outside. We refuse to be the bargaining chip between the border-countries and the EU and we do not accept to be considered only as labour to be exploited. We need to unite our voices to express our strength and our refusal in something bigger than the demonstrations, marches, pickets and strikes we organise locally. After the day of struggle on 1st of May, which launched the watchword of the transnational migrants’ strike, as Transnational Migrants’ Coordination we want to build communication and moments of confrontation to overcome the divisions: between men and women, or according to origins and those imposed on us by institutional racism, living and working conditions. While democratic Europe resorts to national authoritarianism to stop the possible mass arrival of migrants and to institutional racism to keep migrant men and women under blackmail within its borders, we want to build connections that support a common struggle for freedom of movement, for freedom to stay and for an unconditional European residence permit. The only answer to fundamentalism, patriarchal violence and racist oppression is unconditional freedom of movement.