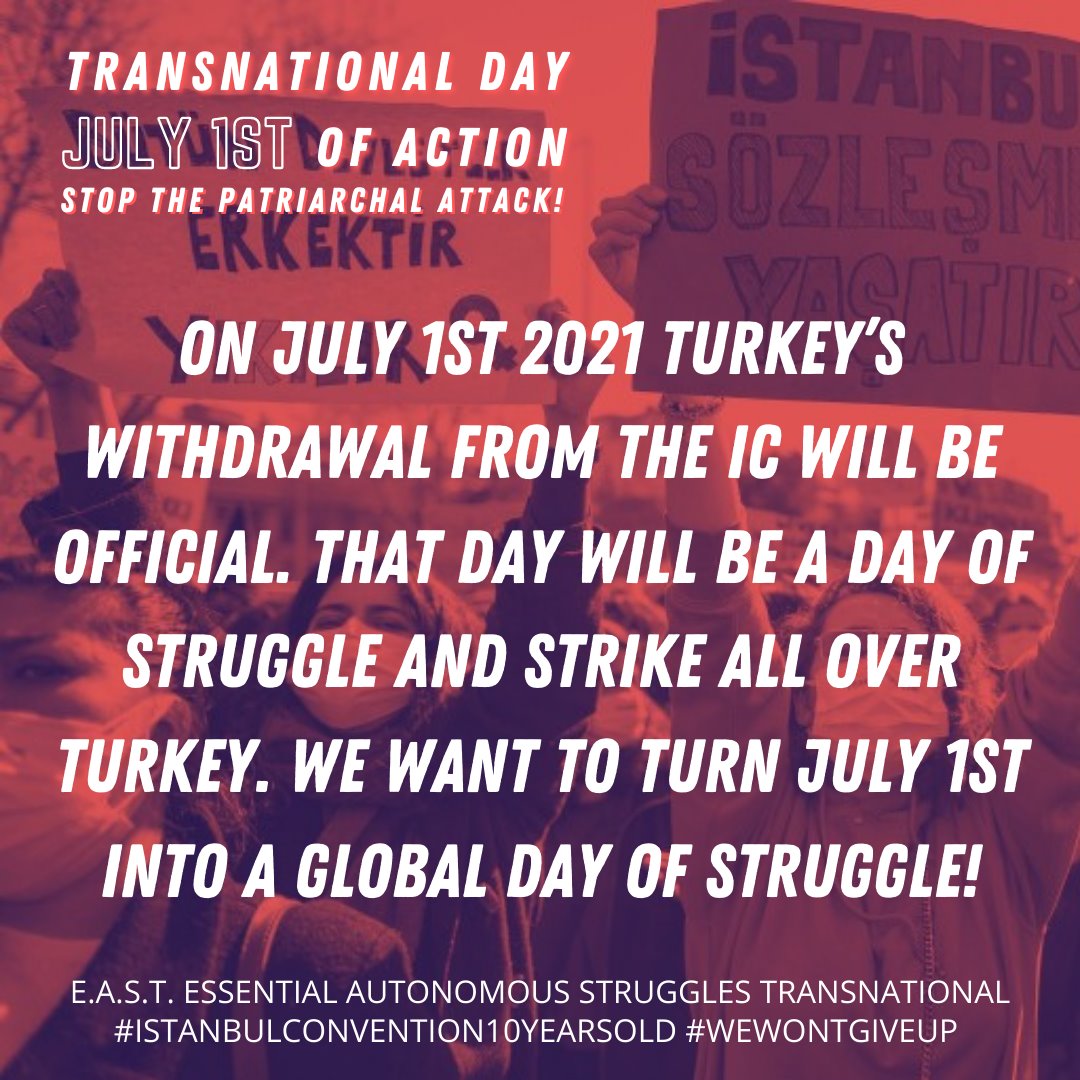 Tomorrow is the day! Our voices will resonate in dozens of cities in Turkey, Europe and Latin America to say: enough with patriarchal violence! Istanbul Convention is ours! We are tired of brutal murders of women, LGBTQI+ people and migrants. We won’t accept that governments and institutions dismiss male, domestic and racist violence, harassments and abuses in the houses, in the workplaces, in the streets, on the borders as a private issue! Our lives are essential!

We won’t stay silent facing Turkey’s withdrawal from the Istanbul Convention, attacks on abortion and LGBTQI+ people’s freedom, familistic policies, limitations to alimony rights and divorce, institutional racism and exploitation: we don’t give up until all this will end! Our struggle is essential!

Tomorrow, July 1st, and in the following days demonstrations and actions will show our transnational power and our feminist connections across the borders:

In Czech Republic a rally will happen in front of the Turkish embassy in Prague: https://fb.me/e/IQGhDamF

In Bologna a whole feminist week of action ending on July 3rd is taking place in connection with Revolt Pride parade: https://fb.me/e/HrqGByWh

In Argentina, a sit in in front of the Turkish embassy will take place in Buenos Aires: https://www.facebook.com/opinion.socialista/posts/2668143813484979

In France banners denouncing the legitimation of patriarchal violence against women and LGBTQI people will be hanged in Paris: https://www.transnational-strike.info/2021/06/25/appel-a-une-journee-daction-transnationale-le-1er-juillet-2021stop-a-lattaque-patriarcale-levons-nous-pour-la-convention-distanbul/

In Slovenia there will be a protest in front of the Turkish embassy on July 2nd: https://fb.me/e/2EqDiqRLl

In Germany a public debate on Istanbul convention will take place on July 3rd with comrades from Turkey, Germany and Greece: https://www.facebook.com/femstreikle/posts/956036831828790

The Transnational Migrants Coordination, composed by migrants collective all around Europe and beyond, has endorsed the day of action denouncing the ways in which the dismissal of the Istanbul Convention, as much as the istitutional racism of the EU, prevents migrant women to escape from male and State violence: https://www.transnational-strike.info/2021/06/29/1st-of-july-transnational-migrants-coordination-against-the-patriarchal-attack/