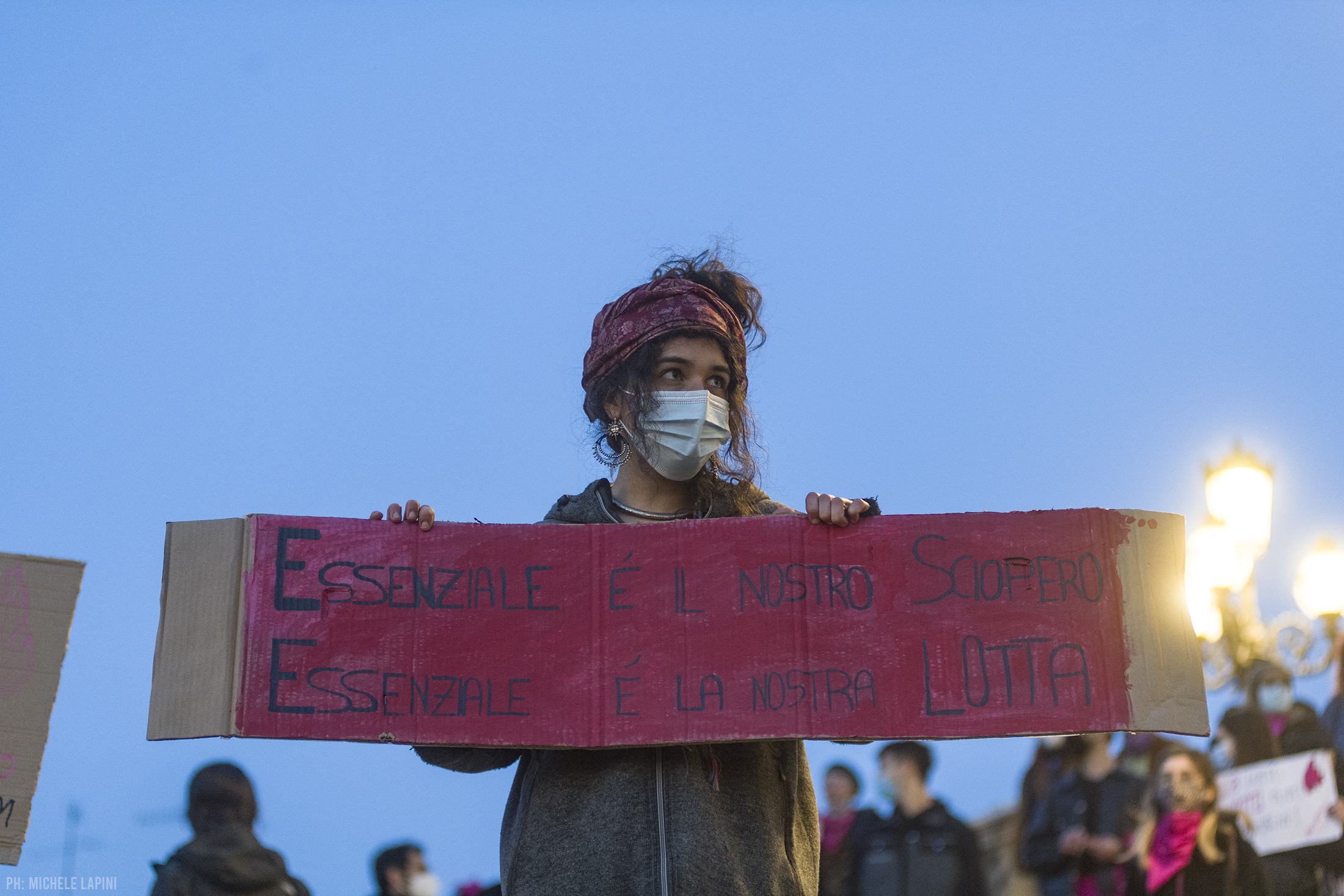 Towards the transnational day of action of July 1st we publish a text describing the patriarchal backlash in Italy, where the Istanbul Convention is in place, but violence over women is on the rise especially in the conditions originated by the pandemic.

In Italy during the pandemic the load of reproductive and care work – underpaid or not paid at all – has considerably increased and has weighed mainly on the shoulders of women. For almost a year schools have been closed and this has meant that for a lot of women there has been an enormous compromise between housework and a paid job. At the same time the government has answered in an unsatisfactory way with very meagre babysitter benefits that generate precarious jobs for other women.

Even before the pandemic in Italy 1 out of 2 women was unemployed (48%), and during 2020 70% of the people that lost their job were women. For those women that are in employment it’s not getting much better: precarious jobs, low wages and exploitation are the norm, especially for migrants.

Reproductive and care work in sectors that are considered essential – such as sanitation and healthcare – are being performed almost completely by women, mostly migrants, in exchange of low wages, under work contracts that offer very little protections and with very intense working rhythms. In this regard, it is very significant that one year ago an amnesty was approved to legalise the positions of migrants working in agriculture, in domestic care work and in elderly assistance.

This amnesty has made clear how essential migrant labour is in these sectors and the link between exploitation and institutional racism. The possibility of getting legal status was in fact dependent on the employer, thus increasing the possibility of being blackmailed. Furthermore, the amnesty formalised the position that migrant women need to fill within the gendered division of transnational work – literally identifying them only as domestic and care workers.

With regard to gender and patriarchal violence, women’s shelters have reported a large rise in domestic violence during the lockdown and they have reported the structural lack of funds and personnel that could support women in their search for a way out of violence. The institutions haven’t responded in any tangible way, in spite of the fact that the repercussions of the pandemic on women have made them even more financially dependent and have made it really hard to push away violent partners.

The reconstruction policies that are going to be applied are completely inadequate to answer these problems. The writing process of PNRR (the National Recovery and Resilience Plan) was made during a moment of passage between two governments – the Conte government that was composed by centre-left parties and the Five Stars Movement Movimento 5 Stelle and the Mario Draghi government that is formed by a great coalition that even includes the racist right-wing party Lega of Salvini. At the beginning of the first drafting of the PNRR women MPs, women’s shelters and institutional feminist networks have lobbied Parliament with the objective of making gender issues a central topic in the post-pandemic reconstruction. At first, during the Conte government, at least in words gender issues were discussed as a structural problem that would have required extra attention, but it was immediately clear that the topic would have been discussed only rhetorically. In the Plan that was presented by Draghi to the EU the vision of gender issues as a structural problem disappeared even at the rhetorical level, as they were presented only in neoliberal terms. In fact the government’s Plan mentions the containment of losses caused by the low participation of women in the labour market. In the PNRR presented to the EU the allocated funds for women are minimal and most of them pass through companies and only a small part through welfare. Companies obtain finance through women’s empowerment development i.e. through benefits given to companies that are managed by women – thus suggesting that the problem is coming from women themselves as they don’t have enough self-esteem – while other companies can access credit by respecting some gender balance requirements not written in the PNRR. For subordinate workers the only suggested conciliation policy, apart from a small investment in kindergartens, is “smart working”.

The welfare policies that will be adopted by the PNRR and paid by the Next Generation EU, and the reform plan ‘Family Act’ are mainly family-centred. In fact the most important measures are: an increase in the duration of the paternity leave from 3 to 9 days; the incorporation of all child allowances in a single progressive allowance that depends on the income; and an investment in kindergartens that, as data show, will be totally insufficient, given that currenlty in Italy only 25% of children have access to kindergarten.

Families are the main beneficiaries of the subsidies that are going to be given through reconstruction policies. This means that the patriarchal family is reasserted as the fundamental nucleus of the society and that it will be the only access channel to different subsidies and indirect income allocated against the crisis. It also means to continue to rely on unpaid women’s labour. Significantly a couple of weeks ago the conference called “The States General on Natality” organised by the Ministry of Equal Opportunities took place, and hosted the Pope and the Prime Minister Draghi. The event’s website states: “A child is a gift, but it is also part of the common good and of human, social and economic capital”. Maternity is not only displayed as the only legitimate destiny of women, but also as a moral duty towards society. Those that choose not to be mothers commit the sin of antisocial “individualism”.

Thus, these are not policies that oppose gender violence – both financial and physical – that intensified with the pandemic crisis. On the contrary these policies reaffirm a racist and patriarchal society and they hit the self-determination process of women, migrants and lgbt*qia+ people.

The requirements to obtain subsidies, in particular for the child single allowance, are racist because they exclude the majority of migrants. The only way for migrant women to access this benefit will be by working as babysitter, domestic worker or caregiver in exchange for low wages so that Italian women will be able to work outside.

These family-centred policies also damage and exclude lgbt*qia+ people. We’re seeing in these days a strongly conservative reaction on their conditions and rights.

A bill (called “DDL Zan”) on homo-lesbo-bi-transphobic violence is under parliamentary discussion and this has caused the reaction of right-wing parties. This law is already limited as it establishes more severe sentences without any resource to actually prevent and hinder violence. This draft is not enough and thus it is clear that the many people opposing it by hiding behind a debate on the freedom of speech actually want to negate the existence of violence against lgbt*qia+ people and, more broadly, to keep them at the edges of society.

On different occasions women and lgbt*qia+ people took to the streets. There have been strikes in the logistic and multi-service sectors and many times, as it happened for migrant comrades working in the warehouses of the online retailer Yoox, the protagonists of the protests have been women that were fighting for the possibility of a decent life that could also include their maternity choices. This year too, despite the complex pandemic situation, the 8th of March has been a day of national mobilisation. We continue to feel the urgency of being heard and of fighting a system that has shown all its inconsistencies during the pandemic and that it’s quickly rebuilding itself to try to keep all its privileges. This is why we’re going to take to the streets again on July the 1st, within a transnational framework that shows the connections between the different forms of violence. Turkey’s withdrawal from the Istanbul Convention concerns us directly, because it clearly expresses the attempt to legitimise patriarchal violence against women and to affirm patriarchal family and repression of lgbt*qia+ people as pillars of the social order. This attempt is also happening in Italy, where the Convention, which has been formally signed, is constantly disregarded and where patriarchal violence is spreading more and more as a legitimate practice to guarantee the social order. We can’t and we won’t accept it. This is why we’ll take to the streets on July the 1st: we’ll stand together with those who are fighting for sexual freedom and against patriarchal and State violence in Turkey and authoritarianism. We will be together with all the people, in Italy and everywhere around the world, that are not accepting anymore to bow their head and keep silent in front of patriarchal violence, racism and exploitation!