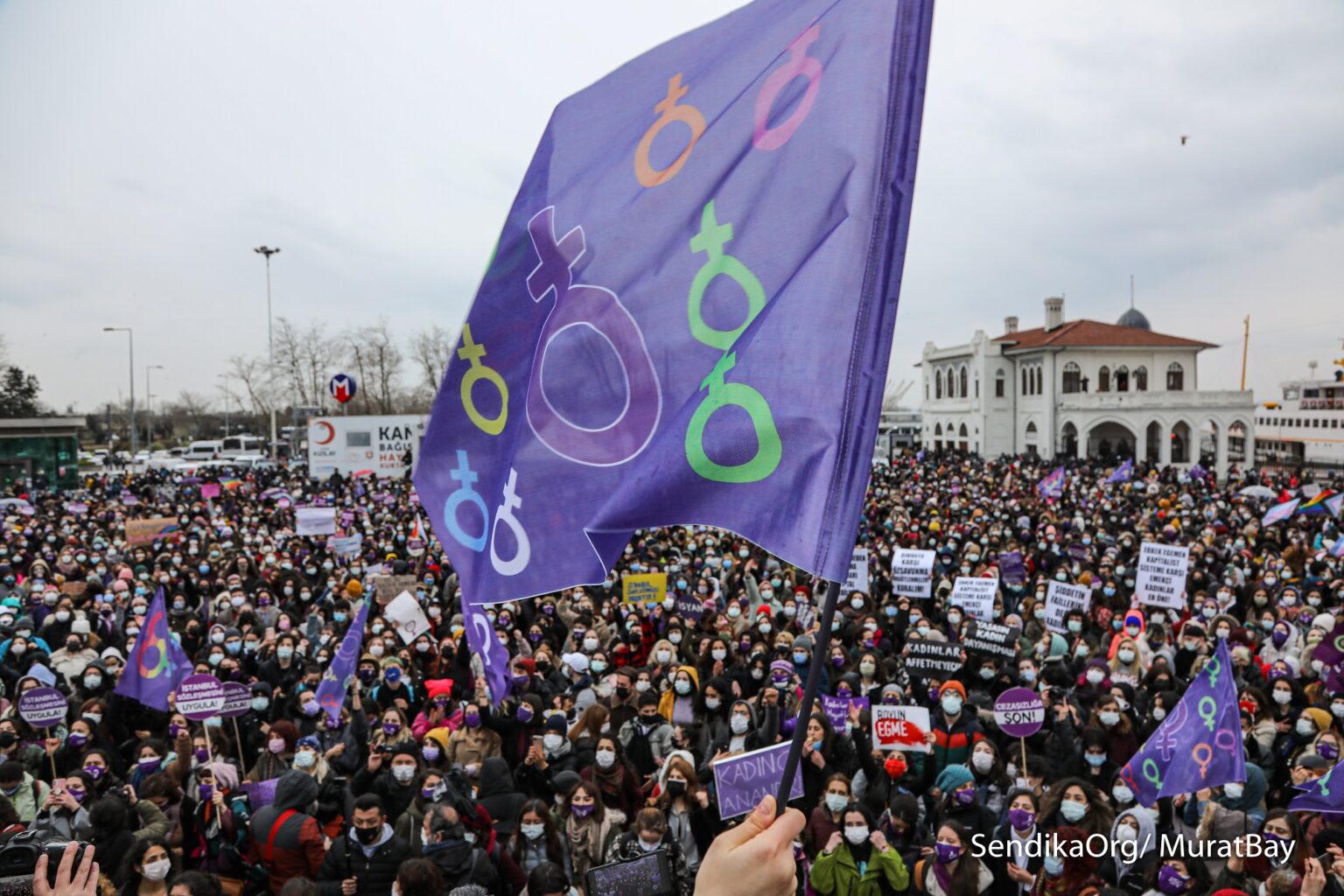 When Erdogan announced in March the withdrawal of Turkey from the Istanbul Convention, women and lgbtqi people in Turkey responded with one collective voice: enough with patriarchal violence!

As EAST, we immediately recognized in Erdogan’s decision the sign of a patriarchal backlash that starts in Turkey but resonates in several EU and non-EU countries, in Latin America, in Palestine: from East to West, from North to South, neoliberal governments are the actors of a patriarchal attack against which we must fight back. There is no clash of civilization between a “backward” East and a “women-friendly” West: with its policies and reconstruction plans EU is responsible of racist, exploitative and sexist policies affecting living and working conditions of millions women, LGBTQI+ people, migrants and is complicit with Erdogan’s treatment of refugees and asylum seekers. The withdrawal of Turkey from the Istanbul Convention is strictly linked to institutional racism and violence against migrants.

On the 1st of July, the day when Turkey will officially withdraw from the Istanbul Convention, women and lgbtqi people, workers and migrants will take to the streets. For these reasons, we called for a transnational mobilization on July 1st that has Turkey as its core, but goes beyond it. That day will be a day of struggle for women, LGBTQI+ people, migrants and essential workers. We will shout loud that we refuse every revitalization of the family as pillar of racist and patriarchal welfare and deadly cage for women. The fight of women and LGBTQI+ people is a common transnational struggle and we refuse to be pitted against each other.

In order to build a powerful transnational mobilization on 1st of July, we organized a working meeting on 23rd of May in which dozens of people from Czech Republic, UK, Bulgaria, France, Ecuador, Colombia, Slovenia, Poland, Turkey, Italy and Germany participated.

In Turkey the mobilization is gaining momentum with a full calendar of weekly thematic initiatives against the withdrawal from the Convention that will lead to demonstrations, strikes and other actions on July 1st all over the country.

In Italy, where IC is valid on paper but substantially unapplied, the feminist nation-wide movement Non Una di Meno is discussing about decentralized demonstrations on July 1st. The mobilization will be an opportunity to fight against the heavy cutbacks to refugee homes for women, the increasing number of femicides and the anti-gender reaction against a bill that sanctions homo-lesbo-bi-transphobic violence.

In the UK, a great wave of protests against patriachal violence and police brutality, encapsulated by the new contested police bill, is taking place and feminist movements, together with Kurdish women, are starting to discuss about the transnational mobilization on July 1st.

In France, women,LGBTQI+ people, sans-papiers, EU and non-EU migrants will organize a protest against violence, exploitation and racism that saw an upsurge during this pandemic year.

In Greece comrades are mobilizing because of a new child custody law. This law makes it harder for women and children to escape from violent partners, while police violence against migrants, including sexual abuses, continues in refugee camps financed by the EU.

In Czech Republic, like in Bulgaria, Hungary and other CEE countries, the Convention is not ratified. There is a growing unrest against the daily oppression that women and LGBTQI+ people experience because of the criminalization of gender by the institutions and the reinforcement of family. In Bulgaria and Germany too there will be initiatives on July 1st.

In Colombia, as in many other countries in Latin America, the recent episodes of state and police rapes and abuses and the disappearances of anti-government protestors make it urgent and necessary to take back to the streets against violence in all its forms – police brutality, racism against migrants and indigenous people, exploitation – and reach out to all those who daily fight against it on the transnational level.

In order show and consolidate our transnational force across the ocean, we will struggle together with our feminist comrades in Latin America who are in the frontline of popular protests across the continent. That’s why we are organizing a public online meeting together with Feministas Transfronterizas on June 20th.

What emerged from the discussion is that our mobilization does not limit to the Istanbul Convention, that is the result of women’s struggles but is not enough to prevent and combat structural violence. Therefore we need to organize and fight against a more general attempt to put women back in their supposed place and tie them to their role in social reproduction; to criminalize LGBTQI+ people; to intensify exploitation and lengthen the shifts, especially for those essential workers who are mostly women and migrants; to use institutional racism to curtail migrants’ freedom.

An online public meeting, local assemblies, articles, graphics, interviews, common hashtags and slogans: we have many things planned in order to build an effective transnational process towards July 1st. EAST will be informing and reposting about these transnational initiatives. We invited everyone who is willing to join the wave to contact us and join forces together!

On July 1st we will show  our refusal to silently watch Erdogan, Morawiecki and other heads of state abrogating the Istanbul Convention and legitimizing violence against women, LGBTQI+ people and migrants. We will make July 1st a day of feminist and transnational uprising against patriarchal violence in all its forms!

More info will be out soon! Stay tuned!

⚡️ We are not silent, we are not afraid, we won’t give up!

⚡️Rise up for the Istanbul Convention!