May 1st: a Step towards a Transnational Migrants’ Strike! 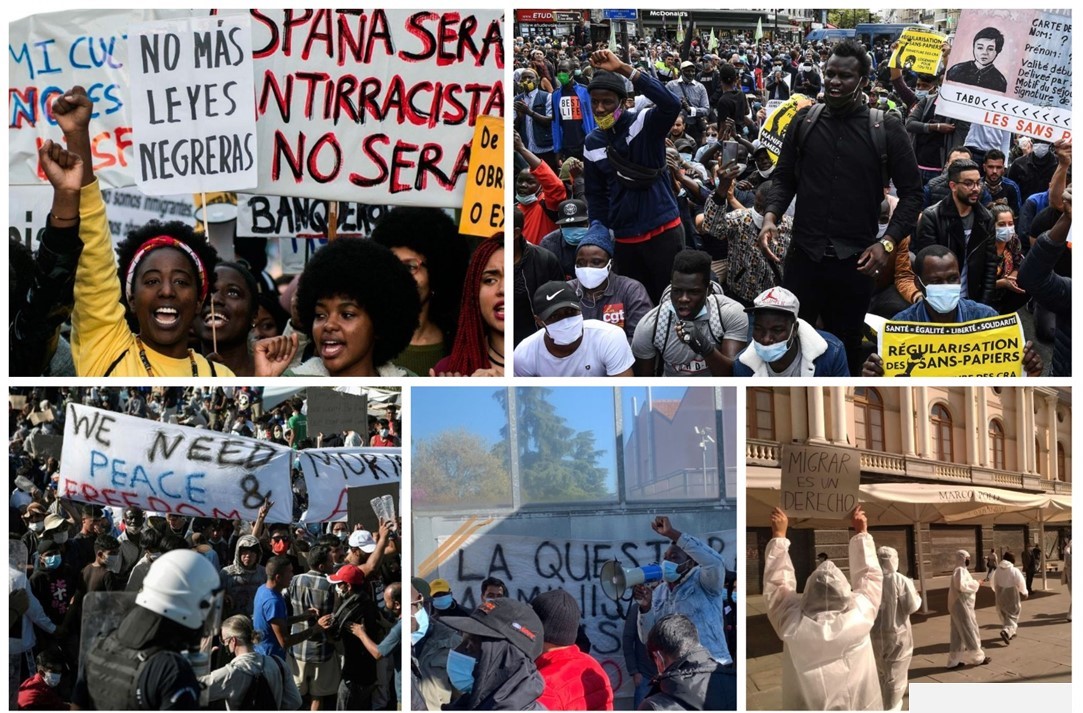 On April 25th, a large online assembly has been organised by the Transnational Migrants’ Coordination, with dozens of participants from different European countries, Turkey, North Africa, South America, and the United States. The assembly showed that the transnational organisation of the migrants’ movement has been able to consolidate and expand in the last months. The TMC, which was born with the aim of affirming the political strength of migrants, overcoming the isolation and the fragmentation of local struggles, has made of this May 1st the occasion to unite different paths within a common horizon of struggle in order to demand an unconditional European residence permit and higher wages for every migrant worker. On May 1st we will put the political voice of migrants at the centre of the workers’ day, to give visibility to their living and working conditions and to give voice to their refusal to be subjected to institutional racism, the blackmail of documents, exploitation and border and patriarchal violence. This is the beginning of a path of struggle to realise the transnational strike of migrants against exploitation and racism, for the freedom to move and to stay.

In each of the countries in which we live there are specific laws that regulate the life and work of migrants – the Bossi-Fini law in Italy, the Valls circular in France, the ley de extranjeria in Spain, etc. – however, regardless of the specificities of each law, the conditions of migrants are similar everywhere. Everywhere they are herded into refugee camps or detention centres with no protection against Covid and no sustainable sanitary conditions. Everywhere in factories, warehouses, fields, cleaning services, construction sites, that is, in all essential jobs, they are put to work without a contract, or on short term contracts, under the constant blackmail of the renewal of the residence permit and the delays and abuse of discretion of public administrations. Everywhere, migrant women working in houses, warehouses or cleaning services are doubly exploited as women and as migrants and, as several speakers pointed out, it is migrant women who mostly perform essential jobs, without being regularised, and without protection from Covid, running the risk of infecting themselves and their families. Everywhere at the borders, often militarised, migrants face threats, violence, and the constant risk of pushbacks, having often first undergone dangerous journeys organised by criminal organizations.

Against all this, on May 1st we want to raise our voices together and say that we are not afraid: we are ready to unite in the transnational struggle not only against local racist laws, but against the racism, exploitation and violence that govern our lives everywhere. Our struggle against the exploitation of migrant labour is global, because global is capital and global is our desire of freedom. That is why we want May 1st to be the first common step towards a transnational migrant strike. The strike is necessary: in front of the refusal to listen to the demands of undocumented migrants in France, in front of the continuation of the blackmail of documents everywhere, in front of the exploitation in the workplaces and in the care sector, in front of the continuation of border violence, in front of patriarchy, the response of migrants can only be to increase the struggle on a European and transnational level. Because transnational is the system we want to fight and transnational is our strength: wherever one migrant fights, we find allies, wherever someone fights on the migrants’ side, we find allies. Furthermore, several discourses stressed the importance of linking migrants’ demands to the claims of those who fight against exploitation and patriarchal violence: on May 1st we say that it is not possible to fight against exploitation today without fighting for the freedom of migrant workers and that it is not possible to fight against patriarchal violence without fighting for the freedom of migrant women.

On May 1st we will demonstrate in Brussels, Lyon, Madrid, Berlin, Lesbos, Bologna, Paris, Turin, Istanbul and many other cities, taking to the streets and shouting common slogans and claims: an unlimited European residence permit for all and without conditions, unrelated to work, income, family and country of origin; higher wages for all migrant workers; shutdown of detention centres; open borders.

We will make our voice heard because until migrants are free from racism, patriarchy, and exploitation, no one will be truly free! We will free ourselves from the chains of racism, exploitation, stigmatization, and islamophobia: these chains will be destroyed by our will and determination to live in dignity. On May 1st we will bring the voice of migrants in all the demonstrations we will participate in.

The presence of activists from Chile, Mexico, Argentina, and the United States during the assembly also showed that the condition and the struggle of migrants are the same beyond the racist system built by the European Union. Their presence showed not only a strong solidarity with the migrants’ mobilisations in Europe but also the importance of developing communication between migrants worldwide. Our transnational organisation must grow. The transnational migrant strike must become a reality. The Transnational Migrants’ Coordination is the tool to strengthen and widen our collective voice and refusal. May 1st is a beginning.