Struggles in Social Reproduction during Covid19: from East to West and Beyond 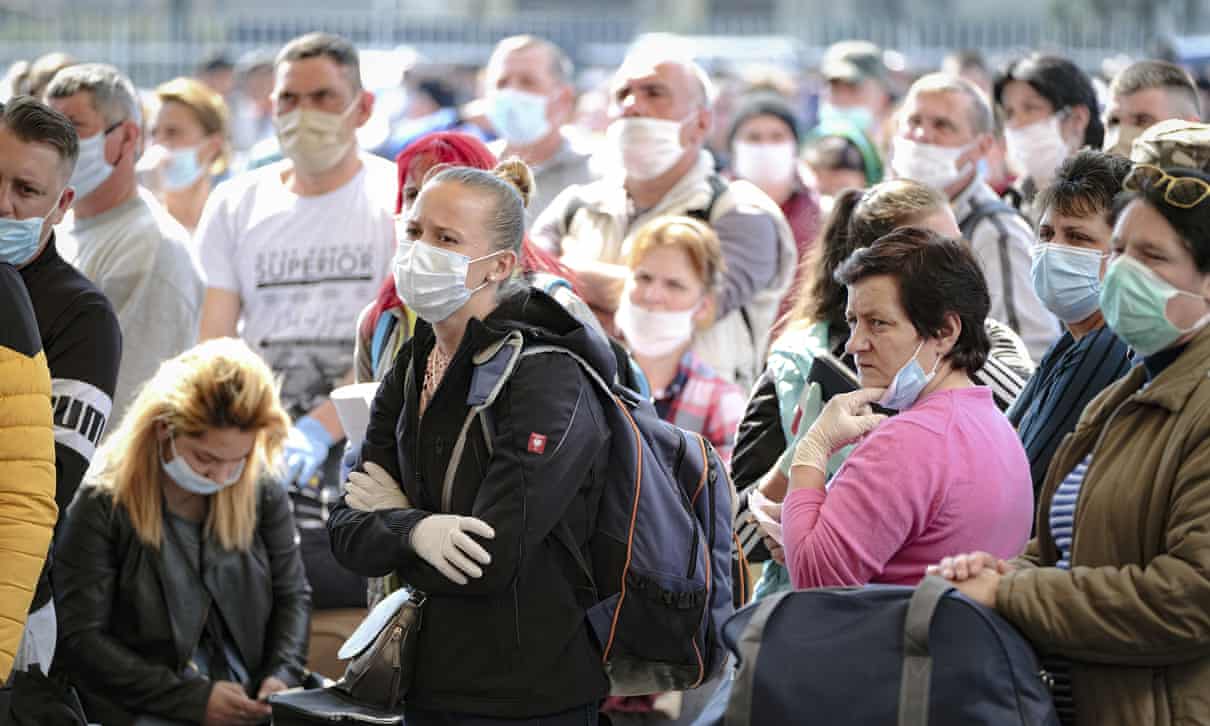 The Covid-19 pandemic showed, more than anything, the deep interconnectedness and mutual dependence of different sectors, areas of life, and countries and regions within the global capitalist system. It became painfully evident how lockdowns or social distancing measures introduced in one place of the world can interrupt economic or social life globally. In this global context, Central and Eastern European post-communist countries and those at the borders of Europe – which are often referred to as a European “periphery” that “supply” richer European countries with “cheap labor force” – share a particular common history of drastic neoliberal reforms in the last decades that set the conditions for the horrific social-economic consequences of the pandemic that we see enfolding now. These current political realities make it dramatically evident that the responses towards the current globally organized capitalist system should happen not only on local or regional, but also on a transnational level. But also, these dynamics showed more than ever before that Europe could be better understood as a battlefield when we start looking at it from an Eastern point of view.

With this in mind, the TSS platform and the Bulgarian feminist collective LevFem started a common political initiative together with many other collectives in Central and Eastern Europe with the goal to better understand and collectively support ongoing and emerging struggles in social (re)production in the region and beyond.

From the dawn of the Covid-19 pandemic in Central and Eastern Europe women, workers, migrants – often hailed as essential workers – have been the protagonists of many struggles contesting neoliberal social reproduction in the healthcare sector, on the fields, at their (often overcrowded) homes, in factories and warehouses, and in the public streets. In the last few days, Serbian people erupted in a loud protest and stormed the Parliament after the Prime minister blamed them for the new surge of coronavirus cases and imposed new quarantine measures. Anti-governmental and anti-corruption protests have taken over the streets in Bulgaria in the last couple of days. A few weeks before, Georgian women care workers and temporary workers staged a protest in Batumi and Tbilisi, asking the government to open the borders with Turkey and EU, because they need to work and renew their European Visa. At the end of June new hotbeds emerged in places like Germany and Italy where exploitation of migrant and refugee labor in meat production companies, warehouses and in the fields are compounded with the housing crisis. Workers refused to be complicit in spreading the virus and challenged the negligent safety measures of their bosses (see the letter of Fembunt).

Protests in the workplaces exploded in many places during the pandemic, and workers have been disputing not only working conditions and safety measures at work, but the entire deteriorating set of social and living conditions due to the pandemic including but not limited to welfare, health, residence permit, housing, and patriarchal violence. This is the case of women and LGBTQI+ people who took over the streets in Romania, supported by the solidarity shown in many other countries, against the abolition of gender studies, right when in Hungary people protested against Orbán’s transphobic law that prohibits correcting the gender marker in the birth certificate and his government’s rejection to protect women from domestic violence and sexual abuse. At the same time, in Turkey women contested rape-marriage law, and in Poland, women took to the streets against the attempt of the government to profit from the critical situation to further restrict the already limited freedom of abortion. The devaluation of care work, especially if done by women, was the object of a wave of protest actions in Bulgaria, where nurses and doctors in different hospitals all across the country collectively resigned in the beginning of the pandemic. They refused to work without safety protection and for a miserable wage which compelled them to work two or even three shifts in different places, risking spreading the contagion. Devalued, precarious, underpaid: this is the reality of healthcare and care work exposed by the pandemic. In Spain and Austria, migrant care workers protested against employment agencies that compelled them to move into unsafe conditions across the borders to perform those healthcare activities which are essential for these countries. National governments all over Europe excluded migrant domestic and care workers from emergency subsidies, while in the East welfare is collapsing after years of underfunding and after nurses and medical staff left in search of a better wage somewhere else in Western Europe.

What is happening in the Central and Eastern European regions and at the borders of Europe cannot be detached from what happens in the West. The massive protests in the United States organized by groups connected to Black Lives Matter – that recently called for a national strike against exploitation and institutional racism – originated demonstrations in many European and non-European cities, where blacks, migrants, young people, women are contesting the manifold forms of racist violence. Historically and currently, black workers have been left out of unions and union laws carefully avoided giving unionization rights to care workers and farm workers in the United States which were predominantly black and are now mostly people of color and Eastern Europeans. These eruptions connected with migrants’ marches and rallies for a European unconditional and unlimited residence permit.

How to empower all these struggles overcoming divisions and fragmentation? How to practice the transnational as battlefield, overturning neoliberal competition between countries and regions? The struggles, protests, strikes, which in these months have crossed the Eastern regions echoed at the European and global level, showing that social reproduction – meant not only as reproductive labor but as the reproduction of racist hierarchies, sexual division of labor and gendered roles, precarization and exploitation – is the core of today’s struggles. Also thanks to the global women’s strike, different subjects started to contest neoliberal social reproduction: all the struggles taking shape around the covid-19 crisis show that women, migrants, workers are no longer willing to accept to pay the higher price of this crisis, and they won’t go back to normality because normality was the problem.

Considering the renewed and undisputed centrality of social reproduction in today’s struggles, during the last two months Transnational Social Strike Platform and the Bulgarian feminist collective LevFem, together with many different collectives from Eastern and Central Europe, Balkan Route, Turkey, Georgia, opened a space of discussion in the perspective of a common political initiative that starts from Central and Eastern Europe and involves women, workers and activists from the East and beyond.

To enlarge these discussions and hear more voices, we organized a webinar, within which speakers from Bulgaria, Georgia, Romania, Slovenia, Spain, Turkey. The main goal of the webinar was to debate how to pursue a process of connection between different conditions, in the East and beyond, consolidating and expanding the everyday revolt of women, nurses, care workers, LGBTQI* subjectivities, migrants, refugees, Roma people. At stake, there was the challenge of bridging the divisions between center and periphery, East and West, of practicing Europe as the minimum terrain of an initiative which is not limited to its institutional borders.

At the webinar the speakers reflected on the multifaceted responses to the pandemic – both from the local governments and by struggling women, workers, migrants. Many similarities, but also specificities became evident.

In Turkey, for example, women have been performing most of the reproductive work, paid and unpaid, which the pandemic increased by 50 minutes for men and by two hours for women. The government granted no minimum wage, no benefits for unemployment which hit hard especially textile, food and retail sectors, where mostly migrants and undocumented refugees – often living in camps at the borders of Syria – and women work.

In Bulgaria people have been left alone, advised to take social credit that the government conceded. Indifferent to the social and healthcare crisis, the government lifted the measures chaotically and very fast, thus provoking a deadly second wave of cases. The health care system is under heavy pressure, and it has been so for many years, with the nurses protesting against understaffing, exploitation, poor wages forcing them to work in several hospitals, risking spreading the virus easier. Many people, especially women, care workers, agricultural workers, who came back to the country after losing badly paid and difficult jobs, were accused of being public enemies and vectors.

In Georgia the pandemic increased the workload of welfare workers, nurses, sanitation staff, pushing the already gutted welfare and healthcare system – the 40% of all the clinics is owned by the Bank of Georgia; doctors and nurses have not been paid for months – to near collapse.

Throughout the Balkan region the pandemic is labeled as a security threat using politics of discrimination against migrants and refugees. In Serbia, Croatia and Slovenia local paramilitaries appear as an addition to the aready militarized, violent borders. Intensified illegal police pushbacks are coupled with records of violence on behalf of security personel in migrant camps and detention centers. As a response to state violence migrant protests happen in the Asylum home in Ljubljana, followed by detainee protests on the jail-like apalling conditions in the Detention Center in Postojna, Slovenia. In addition, the governments in the Balkans have all implemented measures which reveal the large labor and status gaps between the populations. For the past few months thousands have protested in Slovenia in anger against corrupt individuals and parties. All of the countries are struggling against processes of privatization of healthcare. Other than migrants, also women, especially ones who work in factories, logistic lines and in reproductive sectors, pregnant women, single moms, women who suffered domestic violence, as well as Roma women have been paying the highest price even before the pandemic. As everywhere else, factory and reproductive labor workers have experienced inadequate working conditions with little or no protection, or have been laid off from their workplaces.

In Romania one million workers returned from European countries, and, after losing their jobs, are now living in poverty, with no safety net, in overcrowded houses where women are performing long hours of domestic work, and especially in the case of Roma people – under the constant risk of eviction and indebtment. The government signed agreements to facilitate the return of seasonal workers to Germany, confirming that Romania is very much dependent on global interconnections.

What emerged from this discussion is the urgency to use this space to intensify struggles all around, heading toward the enlargement of this collective process. The challenge is to further enhance  political communication between women, migrants, workers and connect these diverse struggles, whilst acknowledging specificities and differences; to involve unions who are willing to commit beyond single disputes and national or local contexts, keeping in mind the limits of unionization in highly informalized sectors as the domestic, care and agricultural work; to radicalize, politicize and expand the process starting in the East but going beyond it; to take our power of transnational organizing with the aim of subverting neoliberal social reproduction, racism, violence, exploitation, patriarchal oppression; to reclaim and appropriate once again the weapon of the strike as a practice which is able to transform this unbearable present.

In the upcoming months we will coordinate other public discussions and in September we will organize a public online meeting, which will be open to all those who want to be part of this transnational political initiative. Stay tuned!