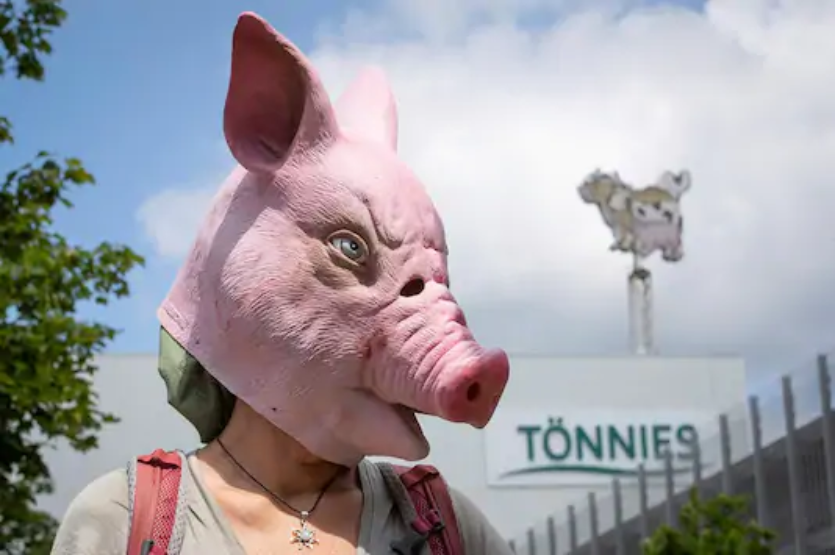 We publish an open letter written by FemBunt, a Bulgarian feminist collective based in Berlin, in response to the outrageous declarations of Mr. Laschet, the prime minister of North Rhein-Westphalia that stated that Bulgarian and Romanian workers are responsibile for the Coronavirus outbreak at the meat processing plant Tönnies. The meat industry in Germany is renowned for employing migrant workers in extremely precarious conditions, worsened by their housing in unsafe dormitories right beside the slaughter houses. During the lockdown, while there was the risk of labor shortage, everyone was eager to organize charter flights and special corridors to make sure that poorly paid labor was available. Yet now the migrants are considered responsible, not the employers that everywhere have been putting the lives of hundred thousands people in danger to continue business as usual. As the comrades from FemBunt state, this case is not isolated but part of systematic institutional racism, which constantly keeps migrants – whose work is essential – at the lowest grades of society. We will discuss about essential workers, social reproduction, women’s and migrants’ struggles in Eastern and Central Europe and beyond on June 28th at the webinar organized together with LevFem.

It is with great concern that we are following the corona outbreak at the meat processing plant Tönnies Holding ApS & Co. KG in Rheda-Wiedenbrück (North Rhine-Westphalia). Currently, over 650 workers in the company’s production facilities have tested positive for the coronavirus. The majority of them are Bulgarians and Romanians.

When the ZDF journalist Nicole Diekmann asked on 17 June 2020 whether the corona outbreak at Tönnies Holding ApS & Co. KG says something about the easing of the corona prevention measures, you gave the following answer: ‘That says nothing about [the easing of the measures] at all, because Romanians and Bulgarians have entered the country and that is where the virus comes from.’

On the one hand, your statement does not seem to be based on facts, since North Rhine-Westphalia- one of the German federal states which are most affected by corona, and of which you are Prime Minister – has 38,845 registered corona cases as of June 18, 2020. This is more corona-infected people than Bulgaria (3,542 cases) and Romania (23,080 cases) combined. On the other hand, and much more importantly, politically speaking your statement is based on the highly problematic assumption that certain ethnic minorities and countries are responsible for the outbreak and spread of the virus in Germany. In this way, you ethnisize a global pandemic which has currently spread to at least 188 countries worldwide.

Therefore, we demand your public answer to the following question:

What evidence can you give that the Bulgarian and Romanian workers employed at the meat processing plant Tönnies Holding ApS & Co. KG in Rheda-Wiedenbrück, were already infected with the virus before entering Germany?

If you are unable to prove your statement accordingly, we will assume that you have manipulated public opinion with the aim of shifting the responsibility for the outbreak and spread of the virus from the political and economic elite to the workers, including those with migration biographies. For decades, migrants in Germany have been working in precarious conditions for extremely low wages. The corona pandemic has only intensified this situation and made the brutality of the exploitative economic system more visible. For this reason, your statement is not an isolated case, but part of the systematic attempts of politics and capital to continue to alienate people, especially those with migration biographies, from the fruits of their labour. All this, in the name of profit maximization and in order to marginalise them through racist language and policies.

We stand in solidarity with all workers, migrants and women* who, through their (poorly) paid or unpaid work, are making our society function!