March 8th – The Weekly Striker n. 3: If we Strike, the World Stops! Spain on strike again 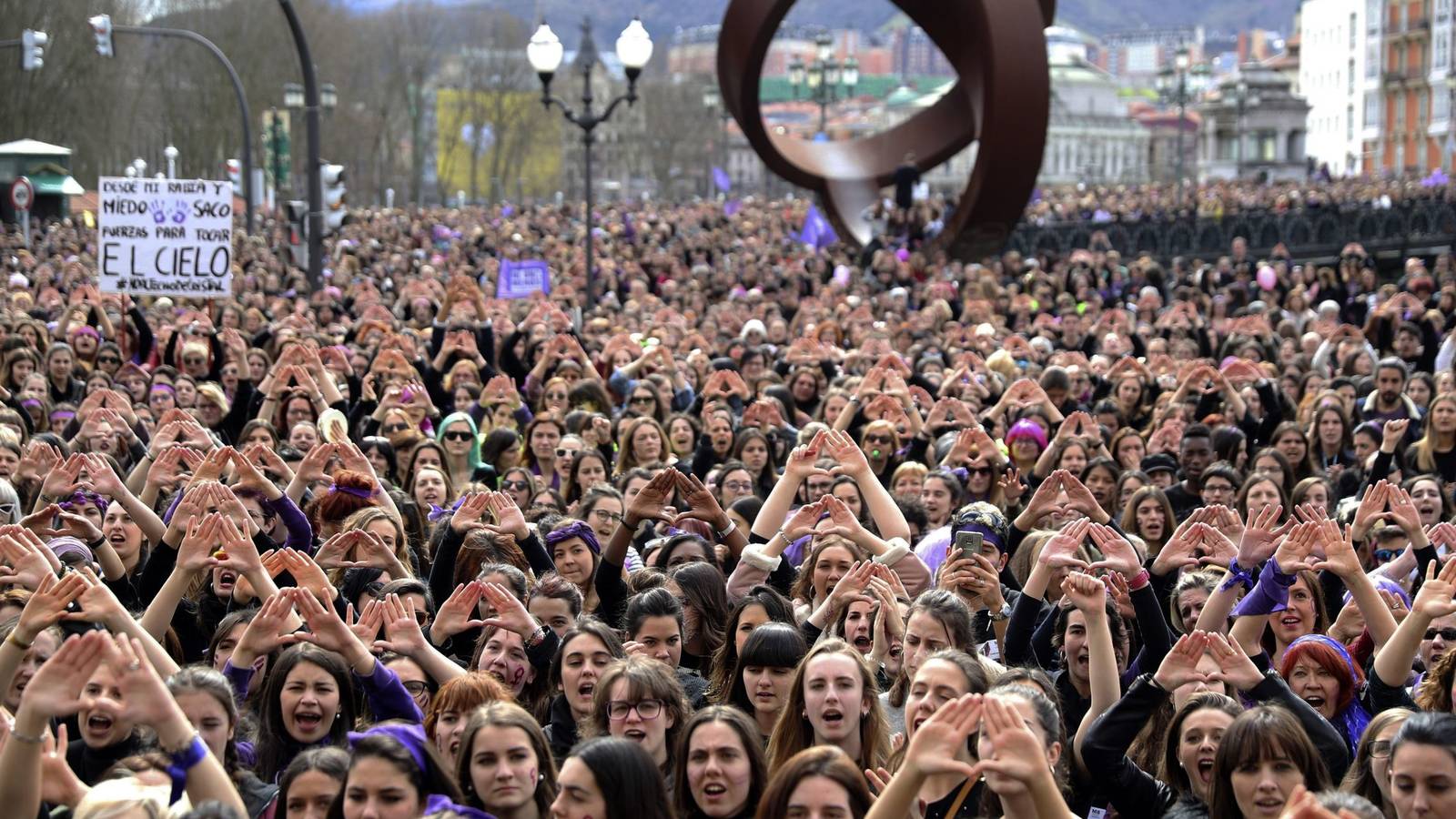 For the third «weekly striker» approaching the next global feminist strike on March 8th, we publish an interview to Laura Casielles, part of the Comisiòn Internacional 8M Madrid (read the other interviews from Bulgaria and Germany). Laura talks about the fact that last year in Spain the strike was participated by millions of people contesting the structural character of male violence over women. The huge success of the strike has triggered a widespread feminist organization in all Spanish cities and neighborhoods. In the wake of the strike, women are now collectively determined to drastically change the patriarchal relationships within society. This determination and this extensiveness will explode next March 8th with the strike of production and reproduction. Within the movement, migrant women have given birth to a commission that aims at linking the struggle against patriarchal violence with that against racism, as two sides of the same oppression. After the transnational assembly held in January in Valencia towards March 8th, the intention of enhancing the transnational communication is clear and strong. The global women strike is thus the occasion to build a transnational front that can break isolation and fragmentation to express a common claim to freedom.

Transnational Social Strike Platform: Last year on the 8th of March 5 million people took part in the women’s strike in Spain. The massive participation – together with the global dimension of the 8M strike – is a clear sign of a protest against the structural dimension of violence against women, affecting the whole organization of society. In many places the strike has contested neoliberal, patriarchal and racist governments as well, mobilizing not only women but all those who want to stand against them. How are you dealing with this mobilizing potential of the strike? Which different positions emerged concerning the possibility of a separatist strike?

Laura Casielles: While we were organizing last year’s mobilization, we came up with an idea we really liked: over the course of history we’ve never had a strike which was truly “general”, even when was called like this, insofar as the whole women’s work (reproductive and care work) has not been interrupted. The major challenge we have set ourselves was to debate on how a feminist strike, able to overcome the traditional notion of strike, would be, while we were building it up. A crucial point was that it had to involve all the spheres of our lives, because each of them is pervaded by patriarchy. Another point was that all women had to be able to take part in the strike, no matter how precarious their condition was. For this reason, we came up with four kinds of strike: productive strike, reproductive strike, students’ strike and strike of the consumption. Above all, we had a common perspective: there wasn’t a better way to strike than another, the important thing was to wonder “what happens if I go on strike”. What we have achieved was exactly this: whatever the answer was, thousands of women asked themselves this question and this helped to gain awareness of the inequalities, to highlight invisible or devalued jobs, to understand that the problems of each of us were not just individual problems. On top of everything, the 8th of March 2018 was this: a great collective awareness.

Two months ago, Vox, a fascist, racist and patriarchal party entered the Andalusian Parliament for the first time. Its proposal of de-financing the Law against gender violence and the anti-abortion positions are a direct attack against women. How are you organizing against it? Will you take the 8th of March as an opportunity to fight back?

We’re not standing here to react to anything. We were here before and we’ll continue after that, working to build another model of society, challenging the present system from its foundations. Feminism doesn’t depend on circumstantial occurrences and neither can fall into the trap of the immediate, its perspective is wider and cannot be considered as a bumper. Obviously, we take a stand at the antipodes of what the reactionary voices propose and which, all over the world, want to diminish the rights and attack freedom; they will find us ready to face them. But we say that the best way to resist is to advance. Let’s keep on. Our horizon is to change the society, to change the forms of living and to think a different world.

Which role had the unions’ endorsement in the incredible success of 2018 women’s strike? Last year the unions called for just 2 hours of strike. This year you have called for a 24h strike: do you expect the unions to support you?

It’s important to remember that the productive strike is only one part of the strike. Reproductive, consumption and students’ strikes have been essential, mostly because they permitted to all women to strike, no matter if they had a paid or unpaid job, whatever their condition of precarity or vulnerability was. The support from the different grassroots unions which called for the 24h strike has been important, because it provided the legal coverage needed, but the two main unions joined us only for two hours of strike, although everybody wanted to jump on the bandwagon then. Anyway, what we as women demonstrated that day is our ability to organize ourselves, beyond the traditional structures. On the working level, there have been valuable initiatives beyond the unions as well: collectives of several professional groups were born in many sectors such as “Women Journalists Go on Strike”, “Women of the Healthcare Go on Strike”, “Women of Theatre and Cinema Go on Strike”. This is what we demonstrated: we don’t need anybody’s permission or help, we can decide autonomously to go on strike…and to block everything.

After 2018 women’s strike, some migrant women expressed the will to have their own commission inside the national organization of the strike.  Which are their claims? Which relationship do they have with other migrants’ struggles?

Comisión 8M, which is the space where the mobilizations for this day have been organized for the past 40 years, doesn’t have a representative logic. Women are participating personally, regardless of the organizations or collectives in which they militate outside this space. What actually happened last year is that migrants and racialized comrades didn’t feel themselves represented enough, thus they decided to start a section of the Commission and everybody’s work has been really improved by their perspectives and questions. However, it should be noticed that there were many migrant comrades last year too – actually since the beginning – and they have been doing a very interesting work, making the intersection in-between their struggles visible. Fortunately we are learning and growing, but many women are still missing. The challenge is to reach all of them.

How are you dealing with the problem of organizing and making visible the reproductive strike and the one of precarious workers?

Yes, they’ve been the most difficult fields to organize, but this was also the most exciting challenge, the one with the strongest impact. Each woman had to wonder how to walk away from care work, how to interrupt the domestic work or stop taking care of the people depending on her. They did it in many different ways. Asking this question to themselves has been a turning point for many: their absence made many things visible. Regarding the most precarious workers, their situation was at the center of everybody’s demands and it was clear that whoever wasn’t able to join the productive strike because of her condition had many other ways to take part. Actually, showing this vulnerability was part of our target. The impossibility to strike was one of the reasons for striking. There are symbolic practices aimed to give visibility to the strike at home. For example, hanging up the aprons from the balcony was a sign of support displayed by domestic workers, who maybe couldn’t go on strike but nonetheless felt part of the mobilization. Feminist strike isn’t just a matter of going on strike: the strike is everything we do regarding this mobilization.

In the “Comisión 8M” there is an international commission: how do you relate with the transnational dimension of women’s strike?

It’s clear to us that the international dimension of the strike is essential, this year even more. Patriarchy crosses the borders: our struggles must tear them apart. Patriarchy is as global as the present reactionary offensive, thus our mobilization must be global as well. We have to meet, to coordinate ourselves, to forge networks taking into account the peculiarities of each territory and, at the same time, articulating a common perspective as well. There are phenomena we can understand only looking at the whole map, as the global care chains or the implications of our consumption model on the workers from the other side of the globe demonstrate. On top of that, feminism undermines an international order based on inequalities, violence and exclusions. The rights will not be such until they will be for everybody. As our Brazilian comrades say, nobody leaves anybody’s hand.