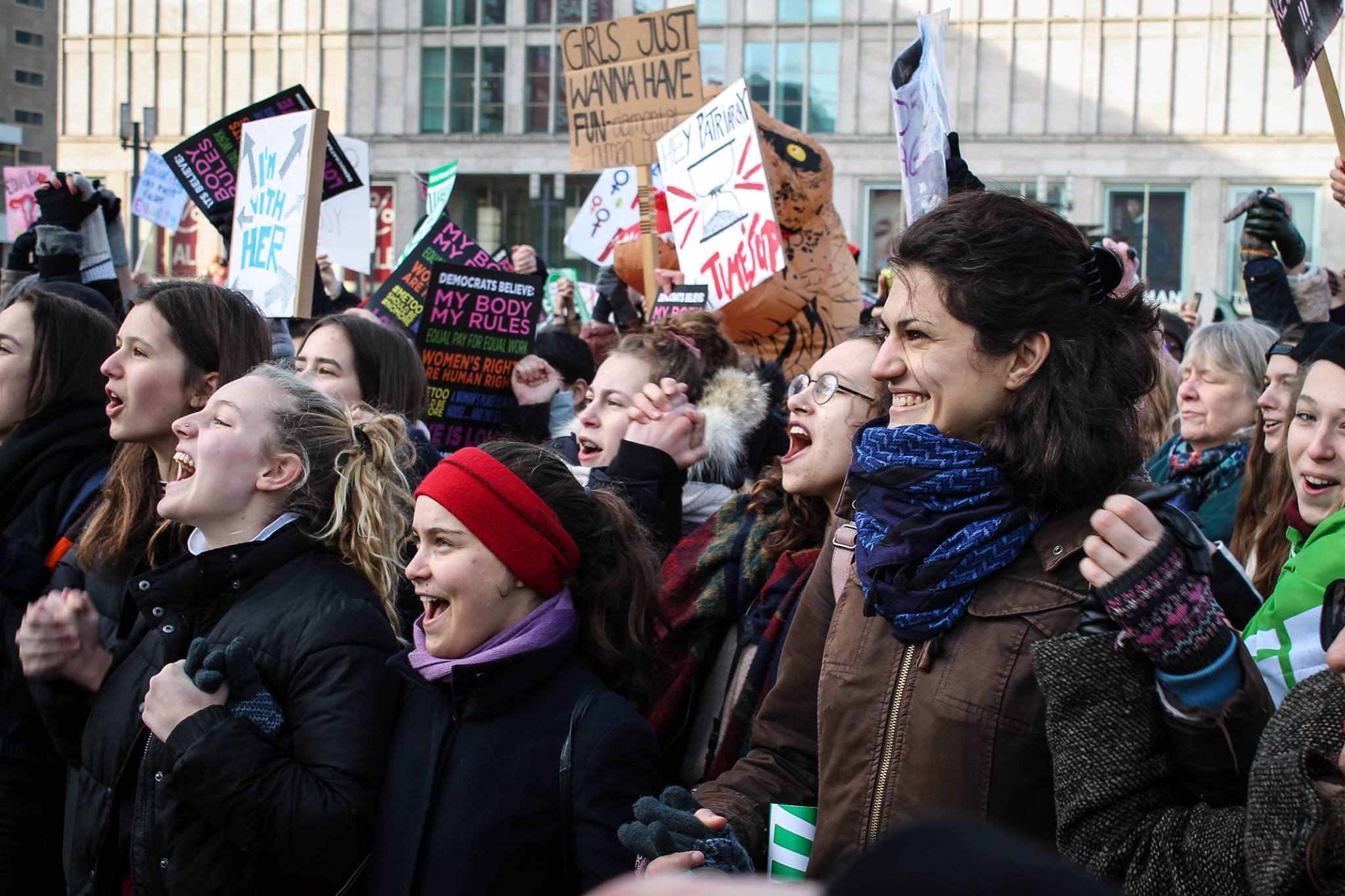 For this second issue of The Weekly Striker (see n. 1 here) we interviewed Johanna and Tessi from the Berliner Frauen*Streik Netzwerk (Network of Women’s Strike – Berlin) who tell us their experience of organizing the feminist strike in Germany. What is striking in their story is the importance of the transnational circulation of the strike, that is producing an autonomous political initiative against the attacks to women that decide to have an abortion, against the precarization of labor and welfare cuts. The feminist strike in Germany is opening up the space to take back the political strike, which has been weakened through legal and informal means in the last decades. Against these restrictions, the feminist strike has triggered a „chaotic process“ that is cracking the traditional forms of union organizing, and building political connections among labor disputes participated mainly by women. The watchword Kein mehr! resonates with the Ni una menos! cries that are being heard globally, to mark the transnational character of a movement that, while living inside the different contexts, aims at questioning the overall connection of patriarchy, racism and neoliberalism.

TSS: After a couple of years during which the global women’s strike has been growing and getting stronger, this year also in Germany you are starting to think about how to go on strike on the 8th of March. What was the spark that started the process?

Johanna & Tessi: There were a lot of sparks, starting our thinking about a feminist strike on the 8th of March. Maybe the pictures from Spain, this huge mass of women putting down their work and clog the streets of Madrid and other cities were deciding for us. Or maybe that many of us were watching the protests against repressive abortion laws in Latin-America meanwhile in Germany Kristina Hänel, a gynecologist was convicted for doing “advertisement” on her website, when informing about abortion. All those moments lead us to say: okay, what is happening right now is a transnational formation of a feminist movement, we have to react on that. Even if we know that it will be hard because currently, feminist players are working very separated from another and structures are often very institutionalized. This is where we also said, this process needs to be chaotic, we don’t want to have control over this. We will set the impulse of a feminist strike for the 8th of march and make clear that this will be a process in which we need everybody to participate.

The political strike is officially illegal in Germany and after the wave of strikes in 2015, especially in the sector of transportations, but also in Amazon warehouses, the Tarifeinheitsgesetz has drastically restricted the possibility to organize it legally. This responds to a global trend, since in these years, in many parts of the world the strike has been attacked, deprived of its force, made harder by generalized precarity and used by the unions as a mere bargaining tool. However, the feminist strike has been an opportunity taken not only by women but by all those who are opposing patriarchal neoliberalism. How is the women’s strike fostering a process of general re-appropriation, reinvention and re-articulation of the strike?

Whether political strike is illegal in Germany or not is actually controversial. Since a judge (who had already been influential during German fascism) had ruled in favour of capital and against the legitimacy of one political strike in 1952, trade unions have been very cautious to not risk high compensation payments.

Within the women*strike we try to share such knowledge and have for example invited women who had been part of the women*strike 1994 to share their experiences. Between 2007 and 2013 there had been a debate initiated by trade union members within the large unions in Germany, that called for a re-appropriation of political strike. Only then there was no mass movement, that could have made use of that debate as a part of an actual struggle. But some of us try to connect to the unionists, who had voted in favour of a commitment of their union for the right for political strike. Personally, I believe that the feminist movement could become the movement to pose the question of legitimacy of political strike in practice. Of course we are trying to be present whenever there is strike action, for example we have visited physiotherapists and pre-school teachers who have currently gone on strike. Both conflicts, one about outsourcing at hospitals, the other one against the so called “Kita-Krise” (childcare/preschooling crisis), which refers to few staff and ridiculous low wages in that sector, represent an increase of conflicts and strikes in Germany in the past years that have a) been dominated by female workforce and b) articulated very clearly, how struggles for better working conditions can be connected to welfare issues, e.g. with better and more childcare available for all parents, safe prompt treatment for patients and justice for outsourced workers. As women*strike we help to connect these struggles and encourage to push them further towards a political strike. At the same time, we are suggesting a broader view on strike, which takes into consideration, that not all labour takes place in the form of, more or less, regulated wage labour and that there are more ways to hurt patriarchy, capital and its representatives, than a classical wage labour strike. It is absolutely true that organizing and collective action has been under attack globally, but there is a chance that these attacks spark resistance and as women*strike we want to help to unite that resistance. The “Tarifeinheitsgesetz”, which luckily has not yet been applied in practice, would hurt small unions, which have indeed contributed to the revival of strikes in Germany. As far as I know we have not yet discussed the restrictive new law within the women*strike, but what I do know is that the women*strike is a space where unionists from potentially rival unions work together.

What kind of potential is the women’s strike expressing in terms of organization and composition? What kind of networking/connecting work are you putting in place? What is the novelty of composition of the meetings and assemblies of Frauen Streik?

What’s most interesting about our organizational process now is that it is actually not that much about 8th of march as a date which everybody is working forward to without thinking what comes after this day. Often political campaigns in Germany aren’t that sustainable or able to organize people beyond their political ‘climax’. From our point of view, things with the 8th of march in Germany were similar in the last couple of years. Now with women*strike, we got the feeling that something is starting to change. In Berlin, women* start to organize assemblies in their direct neighborhood, there are breakfasts to connect with one another and exchange experiences. Other women took the idea of women* strike within their university background and try to make a strike meeting there. So currently everyone is trying to spread the idea of the women*strike in each of her individual spaces.

What are your plans for the 8th of March? How are you dealing with the problem of interrupting both production and reproduction?

Our plans are several. Sure there will be big demonstrations in Berlin during the day in which we want to participate but also everyone has her own idea of how to show her striking on this day. So there are lots of ideas including different forms of how a feminist strike can be shown. For example one of our working group has designed so called ‘Überlastungsanzeigen’ for care work, schedules in which one can list all the unpaid work that is made day by day and write why they are overloaded and stressed out. Those Überlastungsanzeigen were used at hospital and care strikes in the past and it’s one way to participate in the Women*strike if women can’t really interrupt working on the 8th of march either because either they would risk their jobs or even the life of the people they’re taking care about. All the Überlastungsanzeigen will be brought to the ministry of health in a big symbolic action on the 7th of march.

Also women* planning other symbolic actions like a big care mob which will be on the streets on the 8th of march, ‘decorating’ the city in solidarity with the women* who can’t strike on this day. There are other women* who are planning to just be lazy together and to show that on public places all around the city. Our network aim at the moment is also to have a symbolic strike action with women all over Germany together even if it is only for 30 minutes. We want to show that this is the beginning of a movement that is taking place in many cities.

What is the relationship with the trade unions and grassroots unions? Can you expect a backing of the strike? How are the unions reacting to the process of women’s strike? Which loopholes will you take advantage from?

In Germany we do not have many grassroots unions, but as far as I know, they are all supporting the women’s strike. For example the FAU, the anarcho-syndicalist union, had provided a workshop at a nationwide meeting and another workshop was held by IWW and ver.di, the large service union, members. Also the workshop participants have been mixed. We did get a sympathizing statement of the trade union for education and science in Berlin, who is likely to call for strikes in the course of collective agreement end of February or even beginning of March. Would 8th of March not have been declared a holiday in Berlin recently, this could have been a great starting point, but we are of course still in close contact. None of the DGB (German trade union confederation) unions has so far declared, that they are calling for a strike but we do get many requests to present our ideas at union or works councils’ meetings. When we talk to union officials we mostly get told very quickly that they are never going to call for a political strike, but in the end its going to be the members to decide it.

Which watchwords and claims are you articulating towards next global women’s strike? How do you relate with the transnational dimension of women’s strike?

We see a high potential in the fact that lots of the claims from the different women*strikes and protests are used international by this time. And we relate with the transnational dimensions of women’s strike. That’s why you can find slogans like “Keine mehr!”, which is the German translation of Ni Una Menos on our banners or that’s why on our first big meeting in November some women start wearing the panuelos we know from the struggles in Argentina. We know that there are big differences between our struggles but if this really is going to be a transnational social movement it’s important that we have these shared symbols to make clear that we are in solidarity with each other and in the end we’re fighting for the same things.