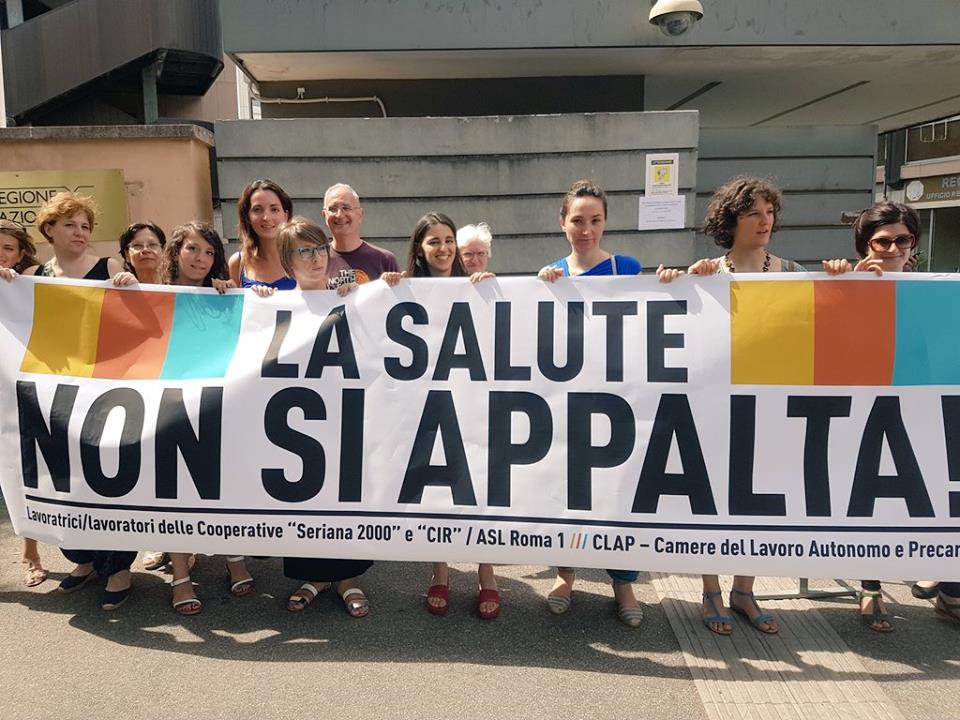 The Conflict Corner this week gives space to a local experience of self-organization that was created in Rome with the aim to organize struggles especially in the health sector and more generally against the precarization of welfare, as a crucial point of impact of the neoliberal organization of labor in Europe. Aiming at enhancing communication and collective organization of precarious workers, the experience of CLAP (Independent Union for Precarious and Autonomous Workers) gives us the occasion to discuss new forms of organization, which try to overcome the limits of traditional union organizing. Besides, it touches upon one of the core of the transnational social strike idea: that is the importance of welfare as a terrain of struggle, because through the precarization of welfare precarious, migrants and industrial workers are disciplined and impoverished and because it is often used as a means to blackmail incoming migrants. Clap’s article also reminds us that, when we talk about welfare rights being dismantled, we are also talking about a thorough precarization of those working in the service sector, a tendency common to all European countries. Sharing local experiences of organization against both welfare restrictions and the exploitation of those working within it is thus central to build our common transnational opposition to the neoliberal principle according to which our reproduction is totally on our own shoulders and not a social problem.

CLAP is an acronym that stands for “Camere del Lavoro Autonomo e Precario” [Independent Union for Precarious and Autonomous workers]. It is a small union born in November 2013 by a network of occupied social centres in Rome, and that is now located also in Naples and Padua.

Over the last few months as Clap we have dealtwith the outsourced health care sector, a phenomenon strictly linked with the development of social cooperatives. Since the ‘80s there has been a massive growth in the outsourcing of essential welfare services, especially in the health care system. In Italy this was implemented through the exponential rise of social cooperatives, even creating the myth of cooperatives as organizations that are able to develop alternative social care practices.

Therefore in Italy, as in many other European countries, the main principles of the welfare state have been reversed, and we have witnessed a shift of responsibilities, a shift of economic funding and professional resources, from the public to the private sector. In fact, the public administrations, in orderto cut the costs, especially the labour costs, have chosen to outsource third sector services to private through call for tenders and contracts.

Instead, from our point of view, these basic services should be a prerogative of local authorities and public health institutions, rather than of private organizations which obviously pursue their own profit. Not only this outsourcing has decreased the quality of services, but even more it has created new precarious workers. Social cooperatives have been able to ensure lower management costs, especially labour costs, overcoming their competitors. This was possible because they enjoy a “favourable” legal framework, thanks to their social status of organizations working for a social economy.

Just to give an example, social cooperatives are able to pay the lowest minimum wage, as defined by the National Collective Agreement. Then, if we consider the austerity cuts, compression of procurement costs, large use of casual workers,mechanism of direct contractwhich are not always under effective control, creating illicit and corruption,we can easily understand how these cooperatives are now places of insecurity and deprivation of rights. This is a social and cooperative economy in deep crisis, which has lost everything that was ‘social’, and actually survives by exploiting its workers.

Within such a scenario, Clap is trying to organize various struggles in the third sector and with health care workers. We have to consider that these are sectors historically not unionized, and today, due to this outsourcing phenomenon, workers are even more fragmented and blackmailed. We are talking especially about high skill health care workers – such as psychologists, speech-therapists, neuro-therapists, educators and specialized social workers – who are poorly paid, often with month delays. These workers, although not formally employed by public administrations, but, as we said, by social cooperatives, are working in public offices, performing basic care services for adults, children and disable people. They generally earn less than 30% of their colleagues employed by the public administration, in a situation of complete insecurity with short term contracts, never sure of their renewal. There appears here the profit of social cooperatives: lower pay, insecurity, fragmentation, short-term contract, or self-employment, and clienteles to the public administration.

To address this situation, as Clap we thought it was, first of all, necessary to overcome the division between workers, trying to affirm the principles of solidarity and mutualism. Thus, we found places for organizing meetings and favour socialization among workers, places whereto share their daily problems, to recognize their similarities, and to connect their struggles and lives. Then, we initiated a process of teaching and training, especially related to trade unions, labour and fiscal law.

Regarding the union action, we have tried to experimentnew organization tools. Our main principle is that workers should not delegate the organization to the unionists, but instead they should self-organize themselves and personally take in the struggles. However CLAP organizational support was crucial for individual disputes, as well as for communication campaigns, small enquires,pickets, and institutional negotiations. In conclusion, what these organizational practices have in common is the idea of mutualism and training, first of all on labour and tax issues.

In the recent months, CLAP has supported workers of multiple cooperatives operating in health and welfare sector. For these workers, mostly women, we succeeded in having negotiations with public institution (in this case the Region) involved in the outsourcing, asking for: internalization in the public health care sector, recognition of seniority, economic equality for those who work directly or indirectly in the public health care sector.

Just one week ago we knew that three female externalized workers belonging to one of these cooperatives have been fired following a request for the regularization of their work-relationship and of their adhesion to the global women strike of the 8th of March. Thus, we are thinking about possible devices needed for the 8th of March, in order to guarantee everyone the chance of striking. For example, we are organizing a small collective fund to support these workers when they will go on strike.

We know, it’s only a small step, but an important one, in order to build mutualism and keep on fighting!