A Global Flood on Strike. Women and Feminism towards March 8th 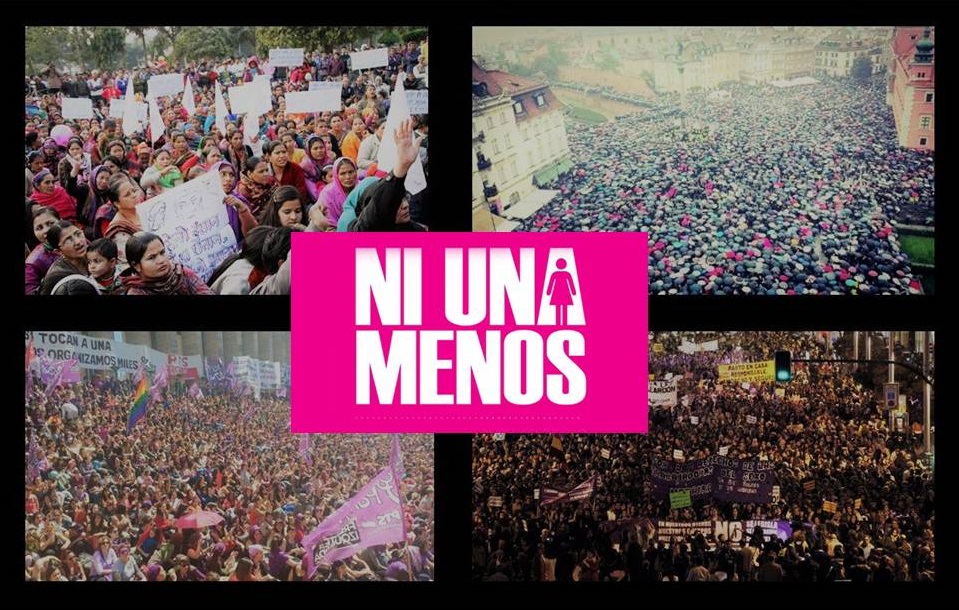 We publish a contribution by Precarious Diʃconnections towards the global women’s strike of next March 8th. The text underlines the unprecedented character of the ongoing women uprising and of the project of a women’s strike. The women’s strike is a chance to give shape to the transnational and social strike because it couples the disruption of labor to the struggle against male violence over women and against all those practices that force women into a subordinate position. Moreover, it does not stop in front of national or local differences. In so doing the project of a women’s strike offers an opportunity to everyone aiming at hitting the current social order in its many facets. While registering that the strike is becoming more and more the political practice able to attack the pillars of the neoliberal order, we have thus in front of us the task to enforce the connections among the different places mobilizing towards the 8th of March strike.

On March 8th a women’s strike will take place and will be a truly global event. The proposal took inspiration from the Polish women, was launched by the Argentinian ones and endorsed by the hundreds of thousands of women that all over the world took to the street on the day against male violence over women. After the huge demonstration in Rome on November 26th, the challenge was taken up also by the thousands of women gathered in the assembly of the day after, with the enthusiasm originated by an unprecedented opportunity. The strike of March 8th represents the chance to attack with the force of a global uprising a social order which uses women’s oppression as a basis to impose and reproduce itself as a domination and exploitation relationship. We will need to use the next months to organize the rage and determination that women are bringing to the streets in many parts of the world, in order to turn March 8th into a moment of global and massive disruption. Now it is then time to ask ourselves: what does a «women’s strike» mean and how can the strike become a feminist political practice? How can this practice show the path to each struggle aiming at attacking the roots of the global order of society?

This strike will be a novelty and an experimentation. Before us we don’t have ready-made models to follow, but just some directions to grasp and to boost. When they went on strike against the bill proposal banning the right to abortion, the Polish women responded to the limitation of their freedom by refusing the order that imposes and recognizes only their coerced freedom to be mothers. It was this very capacity to go beyond the necessary struggle against the abortion ban that excited us and frightened someone else. When they went on strike against the umpteenth murder of a girl in Argentina, the women of Rosario challenged a domination system that uses rape as a weapon of mass oppression, but they did also refuse the position of inferiority in which the laws of production of wealth and social reproduction put them. In front of the dominant tension to valorize women’s difference and affirm at the same time indifference to their lives, in front of a neoliberal order that encourages their freedom only when compatible with subordination and functional to exploitation, in Poland and Argentina women have imposed a strong and new presence. By taking the weapon of the strike in their hands, they massively tackled a domination that demands the full availability of the bodies, time and destiny of all those that it subdues. This demand is made in the most brutal and manifest way on women’s body: thus, the patriarchal oppression of women reveals the secret of the current neoliberal order and of its possible overthrowing. Exactly for this reason the women’s strike can have a global capacity. This is the surprise brought about by the women’s strike: a global subject that does not aim at being universal or homogeneous, but that, starting from its specific condition, paves the way for an overall protest against a domination and exploitation that today concerns many other subjects.

Women being its protagonists, the strike of March 8th can disrupt the patriarchal gears of the contemporary order of production and social reproduction. As a matter of fact, the neoliberal cunning has turned the full availability historically typical of domestic and care work into a general character of all labor, while continuing to force millions of women to carry out a specific function in its reproduction. The house has by now become a market space, in which women’s reproductive work is often governed not so much by a husband, by a father or a brother, but by money. The house is the transnational place in which the border regime pours a cheap labor force, the maids and care-workers of a welfare by now through and through monetized, but the house is also a production site, where computer components, clothes for large-scale retailers or mechanical assemblages are produced by the labor of women, that enter the global chains while remaining inside the domestic walls. In the other production sites as well, the sexual difference of women is directly valorized. Just for the possibility of becoming mothers – even when they have no intention to do so – women are penalized on the job market first of all in terms of wage. The social coercion to procreation justifies a specific form of precarization that has no compensation in terms of social rights. So the «social» that women are forced to reproduce becomes the space of the coerced freedom, not the place of a pacific emancipation through cooperation, care and relationships, but rather a space of hierarchies, oppression and violence. If the global order is still a patriarchal one, because women’s subordination is one of its main conditions of existence and reproduction, the women’s strike concerns all those who aim at subtracting themselves from exploitation and oppression. To refuse to take part in this reproduction, to avoid the functions imposed by neoliberal domination and to subvert its violence is then a political act with a global meaning.

Women’s strike is not a «women question» and must not content itself with amending a position of disadvantage. March the 8th opens up the possibility to bring the strike in the whole society, to invade the squares going through the houses, to defying the metropolitan space marked by policies that burden women’s labour with the destruction of welfare, making their work more and more precarious while valorizing it in the production of a just as much precarious workforce. The strike of March 8th can establish a communication among women along the transnational chains of care-work, knowing that it is not enough that some women are partially freed from domestic work, at the price of putting other women to work in exchange of a wage. The challenge we have in front of us is to establish a political connection that, while rejecting the sexual division of labour, questions its transnational organization too. If it wants to hit at the roots the oppression of women in society, March 8th will need to be a space of expression and struggle for migrant women, who are the first and most powerful evidence that women are a global subject and who, with their movements, practically refuse patriarchy both in their countries of origin and in those of transit and arrival. On March 8th the women’s strike cannot limit itself to claim wage parity, but must put in question the brutal commodification of existence that constrains millions of women and men. On March 8thwomen offer the chance to rise up against exploitation which makes life miserable and hopeless also for all the men who refuse to be the agents of a deaf and brutal violence on women’s bodies and who refuse the mute violence of money and submission. The women’s strike can produce a fracture that unites different experiences and conditions insofar as, starting from a specific position, it aims at rejecting a global order that makes violence its most recognizable expression and that passes off the «freedom» to submit as the only horizon of liberation.

Many women will have to participate in the strike of March 8th. Many men shall respond to their call, because women’s autonomy, which is asserted every day and everywhere, is an essential piece of their freedom too. The working groups reunited on November 27th in Rome pointed out European minimum wage, income and residence permit as minimum measures to gain autonomy. For women these measures can help escaping the dependence from violent men, but also fighting the daily violence of precarity and border regime. These claims are part of the plan against violence that the women started to discuss in Rome, but they can go beyond the project of an institutional intervention and become common watch-words towards a constant accumulation of power.

The challenge that we have in front of us towards March 8th, then, is to move on two levels at the same time. We will have to build locally spaces of organization able to experiment and catalyse around the strike project the many dispersed «no» to the different faces of violence against women. Simultaneously, we will have to consolidate the transnational connections with all those, in Europe and in the world, who will embrace the challenge to build the women’s strike. With this ambition, the movement towards March 8th can give consistence to the project of a transnational social strike. Women know that the «social» is a space of struggle and conflict which does not offer immediately appeased alternatives to the state of things. Their strike can then redefine the borders of social strike, not only because it goes out from the workplaces, but also because it aims to tackle the hierarchy and oppression that support the order of society. Women’s strike can be transnational because the subject that will realize it is global and because it wants to transform the connections among women along the transnational chains of care-work and of value into a force against exploitation. For all these reasons, the women’s strike can become the practice of a feminist politics: it is the chance to oppose to neoliberalism attacking its patriarchal knots, to give to women the possibility to speak massively and to valorize politically the specific condition that they experience day by day and to overturn it; to offer to precarious, industrial and migrant workers and to all those who are oppressed by capitalistic exploitation, inside and outside of the workplace, the opportunity to assert, in turn, their powerful «no». This can become the ambition of a feminist politics without labels, without adjectives and prefixes, one that allows to extend and radicalize the global revolt of women in this present time.