Towards the Transnational Women’s Strike of March 8th 2017 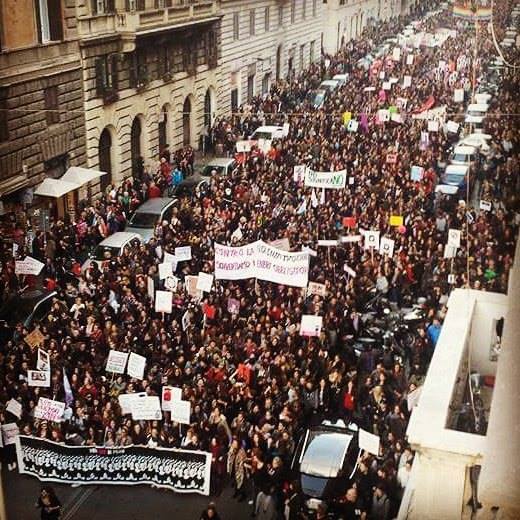 We publish the document written by «Non una di meno», the promoters of the huge demonstration and assembly of last weekend in Rome against male violence over women. Following the launch coming from Ni una menos – Argentina (see at the bottom of the page), an assembly of more than 1000 women endorsed the call for a transnational women’s strike on the 8th March 2017.  The promoters recognize clearly that a global uprising of women is ongoing. While in Rome 200.000 women took to the street, in Istanbul a mass protest against the bill legalizing rape on young women was in place. Last October in Poland a women’s strike stopped the project to further restrict the right to resort to an abortion, while thousands of women went on strike in Argentina after the umpteenth case of femicide. As the launch of a transnational women’s strike on 8th of March shows, the protagonists of this global uprising see in the strike the way to express the refusal of the patriarchal backlash against the desire of freedom sought and practiced by women in each part of the world. The strike is the way to manifest women’s power and to struggle against and disrupt the many sides of violence over women: from sexual violence to the restriction to the possibility to have an abortion, from the neoliberal coercion to maternity to the sexual division of labor and precarity, from institutional racism against migrant women to cuts in welfare benefits. While the watchword of the strike clearly affirms itself in a more and more widespread way on a global scale, the 8th of March can become an actual transnational strike because transnational is the subject that aims at practicing it. The 8th of March can acquire a whole new meaning if it aims at manifesting a global power through the women’s strike, through the massive insubordination of a part of society against the oppression and exploitation imposed by neoliberal patriarchy.

The unexpected force of an international feminist movement

The 25th of November – the international day to stop male violence against women – is usually no more than an empty institutional day, used by politicians to sanctify the victimization and impotence of women. This year in Italy, a country that sees the number of instances of femicide growing year after year, this day has been re-signified by a huge self-organised demonstration.

The demo was called under the slogan #NonUnaDiMeno (Not one less), to recall directly the Argentinian demonstrations #NiUnaMenos, and to stand in solidarity with all women in the world that are fighting everyday against discrimination, violence, and for their self-determination, from Poland to Turkey, from Island to Chile…

This demonstration and the following assembly were called through a fruitful encounter between different female and feminist realities, collectives, networks, and many single persons from all over Italy. Promoters of the event were: the network Io Decido (I decide), D.i.Re, and UDI. The metropolitan network Io Decido of Rome in the last three years has mobilized against austerity measures cutting on hospital and health care, for the access to abortion and contraceptives, and for reproductive and sexual rights for all. D.i.Re – Women Network Against Violence – is the Italian network for 77 non-Institutional Anti-violence centers, managed by women’s associations. UDI – Union Women in Italy – was born after the female experience of the anti-fascist Resistance, with many local and territorial groups it has been a main actor in the struggle for fundamental rights for women.

In a country that is being narrated as the new turning point in the rising of right-wing populism in Europe, this demonstration has been a real dislocation. No one was expecting so many people to gather in Rome, in a completely self-organised way. Not even those who launched the demo! It was demonstration launched by women and open to all subjectivities that are fighting against violence and all other forms of discriminations, especially transfeminist and lgbtqi. It was a day against all forms of violence that we live in our life, of which femicide is only the last and extreme representation. As we can read in the call of the demo: violence is the austerity measures that are cutting on welfare, health care, education, and social policies; violence is reforming the labour market towards more and more casualization, as in the Italian Job Act; violence is doctors in Italy that are still permitted to raise a moral exception against abortion; violence has many forms, and we have to recognize them all to fight against them, as the thousands of banners and signs were pointing out during the demonstration.

Although Italian media spectacularize the death of women on a regular basis  (one woman is killed every three days), almost none gave any news about a demonstration of almost 200.000 women against this very violence. This incredible force was evident also the day after in the national assembly, where more than one thousand of women gathered to write a feminist plan against violence. The workshops were: law and justice; labour and welfare; education as a tool against violence; migrant feminism; sexism in social movements; sexual and reproductive rights; narration and media; routes against violence. For hours, more than one thousand of people of different generations discussed how to give a continuation to this common process. In the overall discussion violence has been recognized as a structural problem, which is being condemned only by words, but not tackled with policies, funds, facts, and real transformations. Austerity policies, labour reforms, and the dismantling of the education system, health care and anti-violence centres, are undermining the autonomy and self-determination of women, augmenting social, cultural and sexual discriminations.

Following the Argentinian women, the Italian assembly has called for a strike on the 8th March 2017. The organization of this strike and the territorial articulation of the feminist plan against violence will be discussed in the next national assembly on the 4th and 5th of February. The 26th and 27th November in Rome can be a starting point of a new feminist movement: we are the forces of this transformation, and we have to continue to build it together. From Argentina to Italy… and everywhere else women are struggling, and get organized for their self-determination.

The 25th of November we will claim our own time, we will stop doing what is imposed on us to devote ourselves to what we desire to do. We will meet up, think together, speak up, occupy the streets, the squares, seize the public space and transform it into a space of welcoming and freedom of movement for all women. We will put our anti-patriarchal utopia into practice. To defeat fear, to make visible the fact that we are no more willing to suffer and to potentiate our strength in each territory. To build solidarity bonds, self-help and care networks  among us. We don’t see the woman beside us as a rival, as patriarchy wants, but rather as a comrade: let’s become mates of one another building an unprecedented alliance.

We organize ourselves: for this reason the 25th of November, here and everywhere, we will come together and organize in many and different forms: popular assemblies, open radios, escraches, public lectures, interruption of activities in the workplaces, artistic and political interventions in the urban space.

We organize ourselves and our organization is global. The 25th of November we will converge in a mobilization connecting Ciudad Juarez with Moscow, Guayaquil with Belfast, Buenos Aires with Seoul and Rome. This articulation arises thanks to the women strike and inaugurates our revolutionary October towards the global women strike of next 8th of March.

By intertwining languages and overcoming frontiers, as migrant women do, challenging the turning of their mobility into an illegal practice, it takes shape an uprising against violence, against the feminilization of poverty, against racism, against the absence of political representation, against the attempt of segregating girls and women into the domestic space, against the religious dogmas that claim property rights on our bodies and lives, against maternity as a coercion and against abortion criminalization, against the new forms of capitalist exploitation and the precarization of our lives. Against the deprivation occurring on many levels, because neither land nor our bodies are fields of conquest.

In the whole world we will get organize with a common slogan: #NiUnaMenos #VivasNosQueremos #NosMueveElDeseo