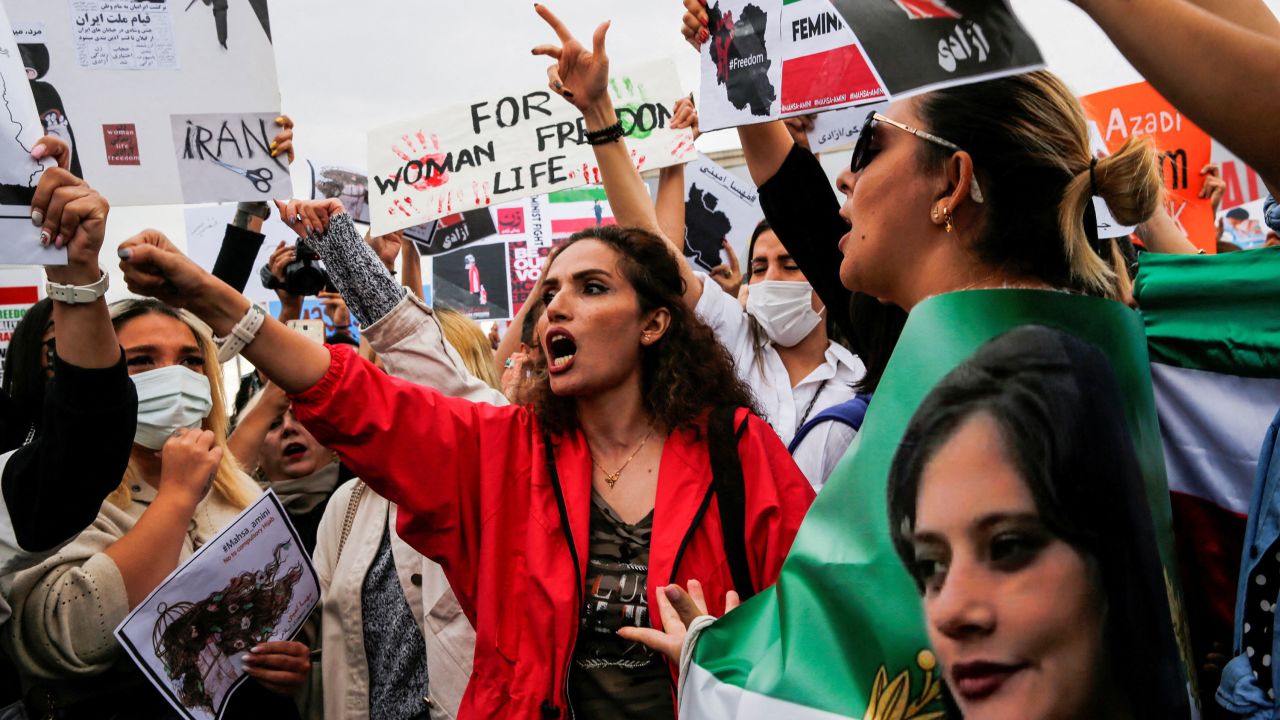 On the occasion of the 25th of November – International day to eliminate violence against women, we publish a report of the online assembly ‘From the revolt in Iran to 25N. Connecting feminist struggles against violence in the war context’.

Watch the video of the assembly: https://www.facebook.com/EASTEssentialStruggles/videos/491484363043310

On 12th of November EAST hosted a public online assembly on the revolt in Iran, started from the murder of the Kurdish woman Jina Mahsa Amini, and the anti-patriarchal struggles in the context of the war in Ukraine.

More than 50 people joined and there were interventions from Iran, Ukraine, Russia, Bulgaria, Italy, Germany and the UK.

Two Iranian speakers discussed the current uprising in relation to geopolitical transformations related to the war in Ukraine and the Russian influence, with Putin having an interest in suppressing the anti-patriarchal, anti-theocratic, anti-authoritarian uprising, to avoid a regime change so as not to find himself isolated in the war scenario. Putin is using the nuclear threat to divert European attention from women’s revolt. This uprising is relevant to women’s struggles in the entire region and beyond (Afghanistan, Kurdistan, Palestine, Ukraine) and shows the women’s capacity to respond to a war waged against them, that turns into a possibility to overturn the entire social order.

The war in Ukraine and the war against women fuel each other in Iran, where patriarchy is needed to keep things in order. In Iran the patriarchal regime justifies women’s submission in religious terms, as it does with poverty: if you are poor God wants it; if you are a woman you must be submissive. So in the squares the protest against exploitation is intertwined with that against  patriarchal violence and that against Kurdish repression. Women in Iran are leading a movement for global change of society, not just for themselves.

A Kurdish comrade asked: with the war and the spikes in energy prices and inflation, the question is who is paying the price of the war? Authoritarian states are now legitimised, as Erdogan who imposed to Sweden and Finland the condition of expelling Kurdish refugees if they want to enter NATO. Iran has increased its military spending of 40%, using them to fund military units for killing people in the streets. Militarization increases violence outside and inside of the borders.

We heard from a comrade in Ukraine how women and LGBTQI groups have re-orientated their work to meeting the needs of people resisting and affected by the war – with housing or fleeing the country – because the state is failing to do so. With Russian forces knocking out critical infrastructure even as they retreat, many are left in a dire situation without access to electricity, water or heating.

A comrade from the Feminist Antiwar resistance in Russia claimed we need to support women suffering from the war and patriarchy, against dictators who are at war on all fronts in the world, who are stealing gas and natural resources. We are all connected and these regimes are not something new. We must fight  for the right to life, freedom of abortion, and to love another person. These dictators don’t want people to be free and want to control us.

A comrade from the Permanent Assembly Against the War emphasized that, if the revolution is obstacled by the war, our aim as feminists is to cope with the war and turn something that deprives us of the power to change things, into a way to create connections that give us the force to act together, knowing that patriarchal violence, war and crisis of social reproduction are connected. The struggle against patriarchal violence is already a struggle against the war.

An Italian comrade reported the outcomes of the national meeting of the feminist movement Non Una di Meno to link the election of the most right-wing government in decades to the war scenario legitimizing governments and policies that hit migrants and women. Racism and the family are used to impose social order. On November 26th a national demonstration of Non Una di Meno will link the refusal of male violence to the refusal of the war in Ukraine, and will connect with the protest of  the Iranian women.

The necessity to link feminist struggles transnationally was highlighted by a Ukrainian comrade who said that the war is aggravating women’s issues and has blocked the feminist initiatives in Ukraine, now that women are involved in so many humanitarian activities, where the state fails to act. Moments of transnational discussion like this are needed. The issue of peace came out in its urgency to say that we cannot accept a false peace as empty pacifism, but peace for us is a struggle against the return to a normality made of violence, exploitation and racism.

Just days after our meeting, a bomb explosion in Istanbul became the Turkish government’s excuse to launch an aerial attack against parts of Kurdistan in Syria and in Iraq previously under Russia-controlled airspace. As Turkey approaches presidential elections, growing inflation, and an economic and energy crisis aggravated by the Russian war in Ukraine has worsened the material conditions of people in Turkey. In order to distract internal attention from this and a growing escalation of male and state violence against women, ethnic and religious minorities, the Turkish government with tacit support from NATO and EU hypocrisy is using again the same old scapegoat: the Kurdish liberation movement, which has successfully established an autonomous form of self-government led by women and based on ecological and grassroots democratic principles. The bombs in Rojava come with the complicity of both Putin and Washington, who both need Erdogan on their side in the current war in Ukraine. These lastest attacks against women’s revolutionary struggle in the MENA region make even more visible the relationship between worsened material conditions we have seen since the pandemic and the escalation of State and male violence against women across and beyond all four parts of Kurdistan and elsewhere in Turkey, Iraq, Iran, Ukraine and Russia.

Final agreements: 25th of November, the international day to eliminate violence against women, will be an opportunity to show the power of transnational feminist connections. It will be a moment when to link the struggle against patriarchal violence, and those against militarism, authoritarianism, linking our opposition to Putin’s invasion to our struggle against the militaristic face of state violence, which is more visible in Ukraine, but it is ongoing in many places in the world as in Iran, Turkey and Kurdistan. We will demonstrate our common struggle using the same slogan as our Kurdish and Iranian sisters, “Jin Jiyan Azadi! Women, life, freedom!” translated into our many different languages.