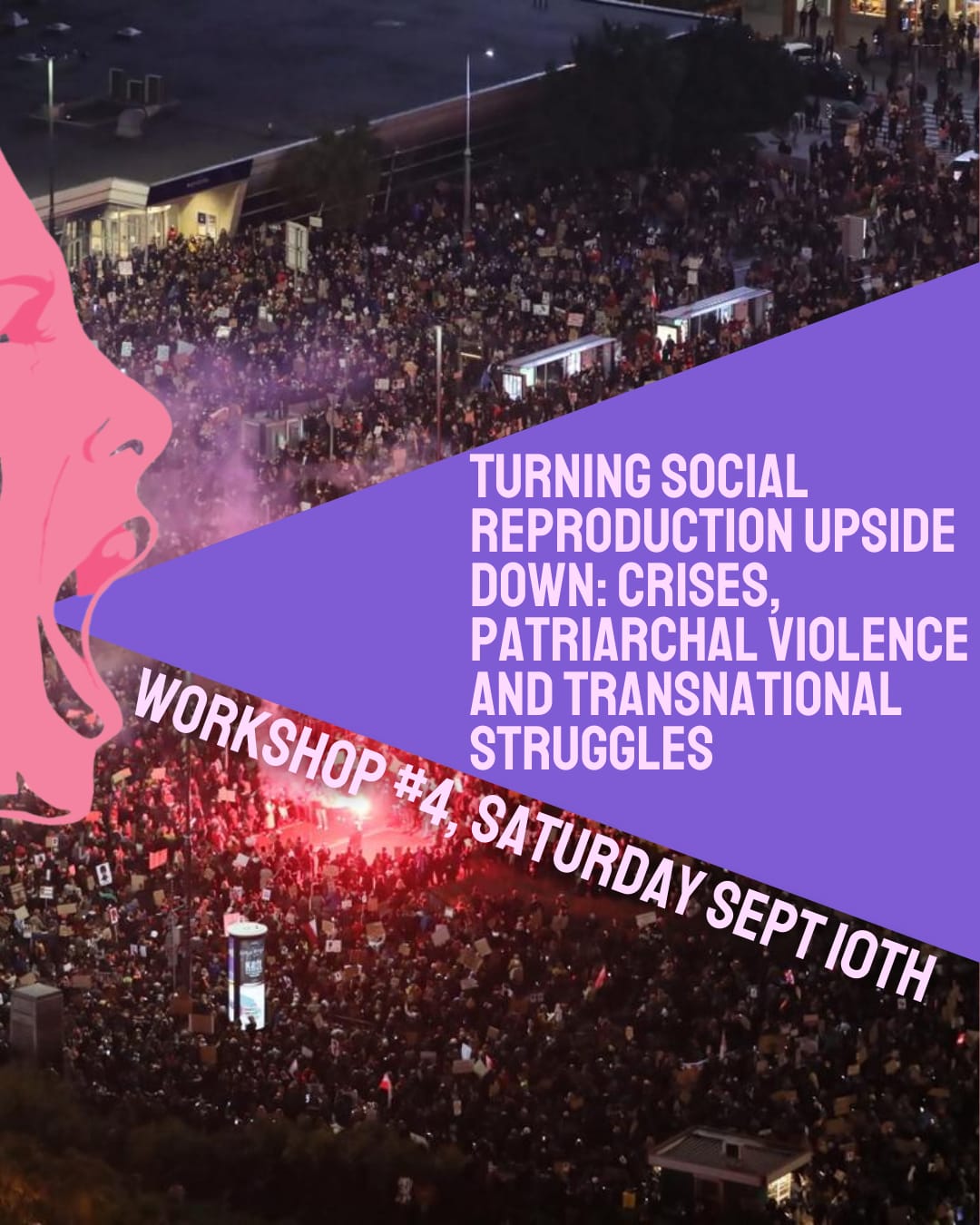 The workshop “Turning Social Reproduction Upside Down” took place on the second day of the Transnational Meeting organized in Sofia by TSS Platform and LevFem. Around 50 people coming from Central and Eastern Europe, Ukraine, Russia, Georgia, Czech Republic, France, Belgium, Italy, Germany and the UK participated in the workshop producing a rich discussion and recognizing that the challenge that feminist movement must face is to keep turning social reproduction into a terrain of struggle.

The introduction stressed the importance of the essential strike of March 8 called by EAST that made visible the conditions in which the labor performed mostly by women and migrants in essential sectors – healthcare, domestic services, logistics, agriculture, cleaning – was keeping society afloat during the pandemic, but was devalued and underpaid or unpaid. Against the extreme exploitation of essential labor, reinforced by patriarchal violence and institutional racism, the strike was the answer: if our work is essential our lives and our struggle are essential too.

Since the beginning of the workshop, we agreed on the importance of transnational organizing and of the strike as the field and process in which women, lgbtqi+ people and migrants can unite and struggle against patriarchal violence, exploitation and racism. Interventions from Czech Republic, from Germany, Italy and Bulgaria acknowledged the urgent need to reinvent the feminist strike to respond to the ways in which new and existing crises and now the outbreak of the war are changing the possibilities of our feminist and anti-patriarchal struggles. How to make visible again our everyday struggle against patriarchal violence, how to connect isolated fights, how to reopen the process of the feminist strike after that the pandemic first and now the war, have shrunk the space for feminist collective organizing, how to translate our claims into political practice on the ground and in our different contexts: these were some of the questions from which we started our discussion.

Comrades from Czech Republic and Bulgaria recognized that transnational patriarchal backlash has strengthened anti-gender campaigns and anti-abortion measures and helped re-establishing the sexed and gendered division of labour. The rise of patriarchal violence attempts to reestablish those hierarchies that women and LGBTQI+ people have collectively challenged. Neoliberal policies, crises and the outbreak of the war have dropped even more the burden of social conditions on women, reinforcing the family as the core of social reproduction, while feminist and LGBTQI+ movements lost their mass dimension and underwent patriarchal attack. Despite these reactions, we have been able to keep on striking, to build important networks and connections – such as EAST – to fight transnationally. During the pandemic, despite the limitation of mass gatherings, we continued to mobilize and as EAST we called for the essential strike of March 8; we mobilized against the patriarchal attack on all women and lgbtqi people that culminated in Turkey’s withdrawal from the Istanbul Convention in 2021; we stood up against the abortion ban in Poland; we joined the call to Strike the war!, responding to the call of the Feminist Anti-War Resistance in Russia.

Lately the war in Ukraine has decreased our possibilities to struggle together even more by closing terrains of struggle, by dividing us and by reducing our chances to organize transnationally. During the workshop Italian and Czech contributions reported the experiences of Ukrainian refugees, mostly women, who are literally paying the costs of the current war as they became object of extreme exploitation and as the war is becoming an excuse for establishing both new hierarchies among migrants, but also for strengthening even more the sexist division of labour. The war is legitimizing sexual violence against women and lgbtqi+ people.

The inflation exacerbated by the post-Covid recovery and the war is worsening even more the conditions of workers in Europe and especially in Eastern countries doubling or tripling prices from one day to another. Comrades from Georgia described how migrant domestic workers are seeing their wages and remittances eroded by inflation, threatening their survival while governments are justifying cutbacks in welfare and healthcare and imposing longer shifts on the grounds of the sacrifices demanded by the military effort.

Demonstrations against the increase of prices have recently took place in Czech Republic, in Italy and in France. The rising living and housing costs are exacerbating a crisis in social reproduction that women have started in the first place by striking against male and patriarchal violence in the squares, in the workplaces and in the houses, by refusing to be identified as ‘natural’ care-givers, by fighting against the racist and patriarchal conditions of exploitation. In Belgium the feminist movement allowed to rethink the role of essential and informal work, leading to migrant and care-workers strikes. In France the transnational strike favored a connection among local and social struggles, making feminist assemblies and collectives places of strong political action against patriarchal violence. The question now is how to turn social reproduction upside down, to contest the ways in which society is reproduced through social hierarchies, violence, oppression and divisions.

In addition, what is at stake is the capacity to go beyond the divisions that, although already existing, are deepened by the war. LGBTQIA+ rights are now used by the EU to legitimize the war and the superiority of Western civilization, putting aside its longstanding support – financial and ideological – to the authoritarian governments like the Turkish or Hungarian ones, and ignoring the curtailing of women’s freedom fostered by its member states’ policies, like the Polish ban on abortion. But nationalism feeds patriarchal violence and justifies attacks on women, as in Putin’s rhetoric of rape employed to justify the war in Ukraine, or in the case of Russian women harassed in Georgia and legitimized by rising anti-Russian feelings, or in the demonstrations against Ukrainian refugees, mainly women who have been already put at work in highly exploitative conditions, that took place in Prague and beyond. There can be no fight against patriarchy without one against nationalism and racism.

What is at stake is the chance to reactivate a feminist transnational initiative that can turn differences not into a weapon to divide us, but into the common ground to enhance political communication across the border, to turn again social reproduction into a terrain of struggle, to recognize and oppose the different and apparently contradictory tools – neoliberal or authoritarian policies – through which patriarchy affects our conditions of living and struggling. What is at stake is the capacity to fight against patriarchal violence in all its forms while recognizing that patriarchy is not immutable but affects the conditions in which we live, work and fight.

We have all recognized during the workshop that a common discourse is necessary in order to make evident that all our struggles are connected and that we are radically committed to improve transnational organization. We will do it in the next months, taking together a stance for next mobilizations such as the international day against patriarchal violence on November 25 th and in connection with the multifarious local struggles which will nurture the process of the feminist strike.