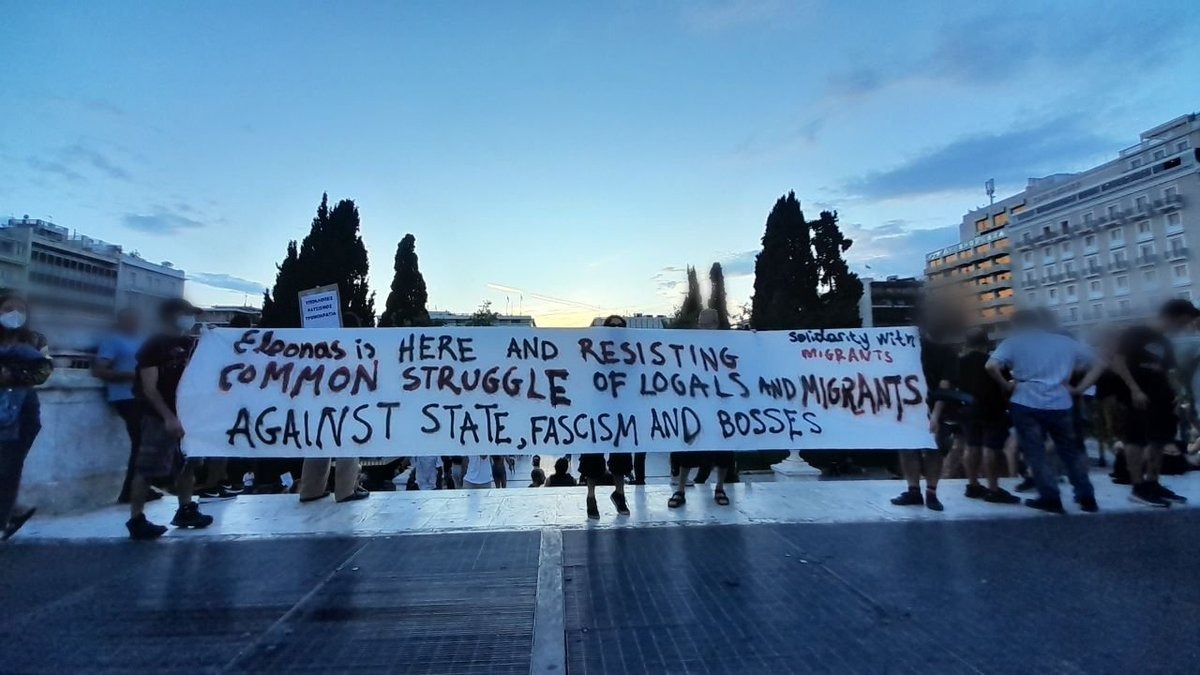 by GIANNIS (Solidarity with Migrants)

We publish this text, written by Giannis, of the Greek collective Solidarity with migrants, to express as TMC our full support for the struggle waged by migrants to prevent the closure of Eleonas camp, the only reception center in Athens. While police are using violence to displace the camp, attacking without hesitation, even pregnant women, the country continues to brutally reject migrants, build walls, militarize borders. The same is happening on the border between Turkey and Iran, where Erdogan ordered to build a wall, and on the borders between Poland, Belarus, and Lithuania, where only white-skinned refugees from Ukraine are being accepted. While the war in Ukraine reconfigures the migration regime, and the energy and food crises require accepting migrants only as workers to fill the labor shortage, migrant women and men continue to cross the Mediterranean and the eastward routes for better living conditions and more freedom. Right now, more than ever, we claim freedom of movement and an unconditional European residence permit. From the 8th to 11th of September we will be at the transnational meeting in Sofia to discuss about migrants’ struggles against exploitation, racism and patriarchal violence and organize together.

Solidarity with migrants and the arrested activist!

The struggle of the residents of Eleonas camp in Athens against their forced displacement has been going on for months now. They refuse to be transferred from the one and only camp in the city of Athens to marginalized camps in the middle of nowhere, or to face homelessness or deportation. What migrants are claiming is to have their asylum procedures taken care of faster, receive the documents in good order and get decent housing in the cities. In the past months, the Municipality of Athens announced the closure of the camp to promote the “regeneration” of Botanikos and Eleonas areas. From June 2022, the Ministry of Migration and Asylum threatened the residents of Eleonas camp to leave the structure. Several transfers have been organized since then to camps such as Schisto, Ritsona, and Malakasa.

On the 18th of August, a violent operation was carried out by special police units breaking into the camp in collaboration with the camp manager to assist to enact transfers. This heavily violent operation tear-gassed and harmed babies, children and mothers who were protesting it with stun grenades at 4 AM, creating an atmosphere of fear and paranoia in a place where people seek asylum from war and police violence. However, thanks to the mobilization of migrants, the police managed to transfer only a few of the residents. On the 19th of August, at 7am, police forces were employed against migrants again. The camp residents wanted to stop the camp manager from entering the camp to delay the transfer plans. She again ordered heavy police units who beat migrants and solidarians, among whom six have been arrested only for having supported migrants in their struggle. They will be sent to a trial on September 1st with accusations that include insulting, threatening, resisting, disrupting the operation of a public service, and disturbing the public peace. This operation was clearly a way to spread fear among the camp residents and the solidarians, but they will not succeed in doing so.

Meanwhile, the camp manager continues to blackmail and intimidate the camp residents, or even arrest some while they are in or out of the camp with various excuses. The next transfer of people is expected to take place next week, possibly before the dawn on August 30th. Migrants are informed about their transfer by a written paper, and have also been told that if they refuse to leave, they will be thrown out to the streets, while their asylum files will be blocked and removed from the Greek asylum system.This physical and mental violence and blackmailing are even against the law.

The struggle of Eleonas has already managed to postpone the closure of the camp and has gained much attention from the public, even internationally, putting pressure to the greek government who uses violence even against children and pregnant women. The determination of its residents to continue the struggle till the end, gives strength to all of us but also requires our solidarity in every possible way. We stand together with the migrants refusing to be forcefully moved to other camps and we support their struggle for freedom of movement against the transnational regime of violence and borders. For this reason we will participate in the Transnational Meeting in Sofia to empower and enlarge our struggles and to organize migrants’ power transnationally.

The struggle of Eleonas camp is just and must win!

The accusations against everyone arrested must drop!

We claim freedom of movement, housing, healthcare, education, working rights and residence permit for all!