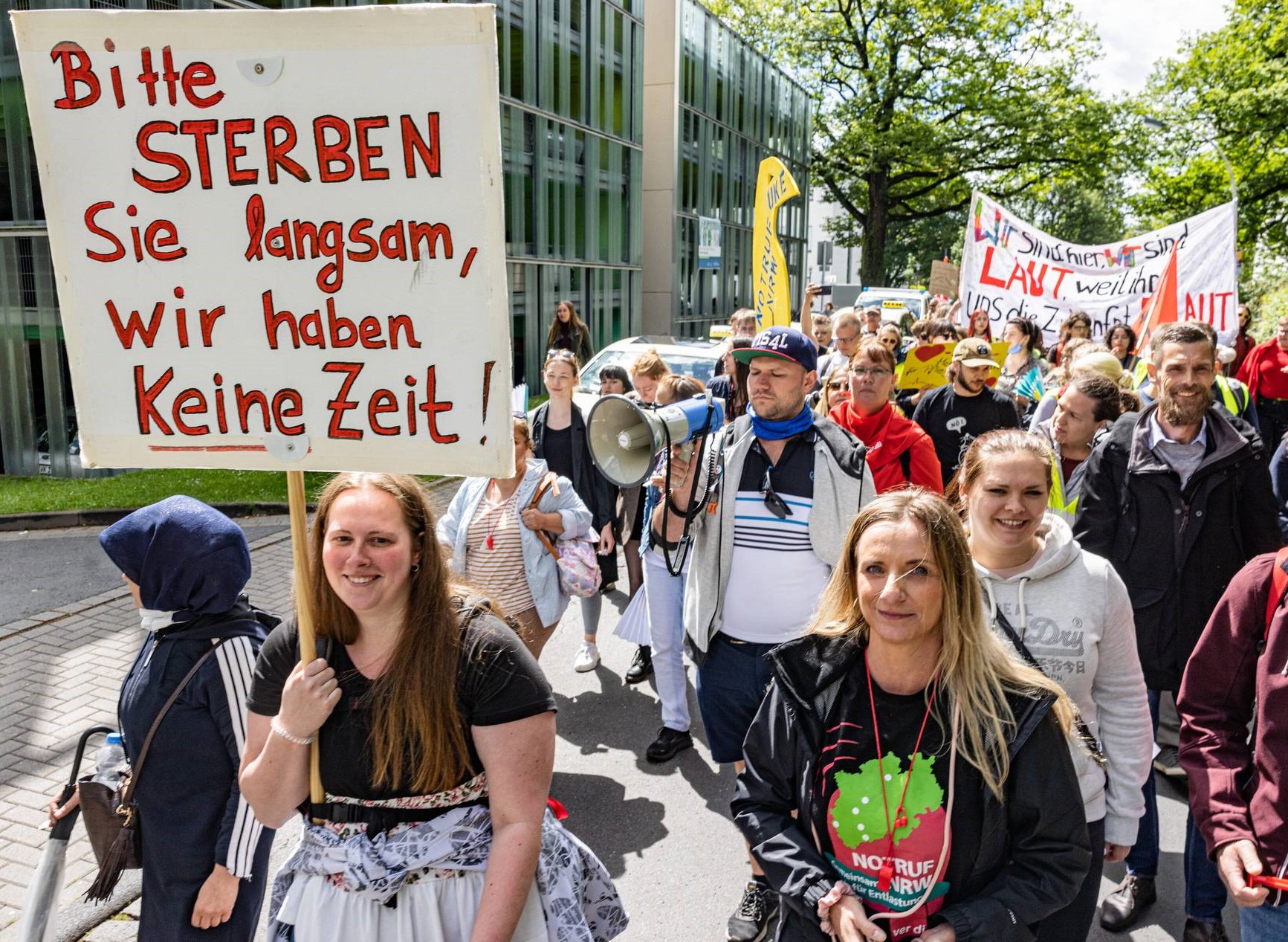 The banner says: "please die slowly, we don't have time!"

On 19.01.2022, about 700 workers from six university hospitals in North Rhine-Westphalia in Germany announced a 100-day ultimatum and said the following:

“Used, applauded, but definitely not going on like this! We, the employees of the university hospitals of North Rhine-Westphalia, secure the health care of the population with our work every day. We need better working conditions! Things cannot stay as they are now. That is why we demand binding regulations to relieve the burden on all work areas and to ensure and improve the quality of training – and effective consequences if these are not complied with. Our health and that of our patients is at stake. We demand from the political leaders and the employers a collective agreement on relief for all six university hospitals in NRW before the state elections. We are ready to stand up for these demands all together.”1

This announcement was preceded by intensive organising efforts commissioned by the ver.di regional structure, but also coordinated with the federal structure of the union. The fact that the latter support the ultimatum is also due to the fact that a similar approach to strike action in Berlin at the hospitals of the Vivantes group and the world-famous Charité finally brought a breakthrough for the workers after many years.

So what distinguishes this strike action, which started with the announcement in January this year, from previous or parallel action? Why is this of interest to the readers of the TSS Platform?

For some years now, ver.di has been actively launching so-called “activation projects”. With varying intensity, professional support from “external” organisers 2 is used in the preparation, but also in the hot phase of the action. This has also led to a steadily growing influence of those trade union sections that aim at a renewal of the trade union, a stronger grassroots orientation and ultimately also at a democratisation of the trade unions. The influence of the large number of participants in online seminars with Jane McAlevey, who on the one hand has made a theoretical contribution to the reorientation of American trade union work, but on the other hand has made the idea of “deep organising” known and spread it in Europe and the Federal Republic. Left-wing trade unionists in particular have recognised the potential of McAlevey’s methods to free the trade unions from their rigidity and to actively counteract the bleeding of the organisation through a constant loss of members. One thing is clear: where organising is practised, the number of members in the workplaces increases abruptly and participation in trade unions is perceived as empowering. There are certainly some details of the “method” that can be criticised3. But it cannot be overlooked that organising is a very vital approach that works on different levels. Within a few weeks, it was possible to win over the considerable number of almost 12,000 workers at the six university hospitals in NRW to position themselves publicly with the help of a petition, but also vis-à-vis their colleagues, and thus to promote the determination of the workers. This determination later led to a very high willingness to go on an indefinite enforcement strike.

The networking of workplace activists with supporting alliances, the virtuoso use of social media, the self-empowerment of workers as media subjects are only some of the keywords. Of particular importance here is that the use of left activists as organisers conceptually creates an organic link between trade union and society. 2

2. From the very beginning, the action was inscribed with the idea of crossing the boundary between the workplace and society

From the very beginning, the workers in the clinics have been thinking about how to make ‘non-employees’ and citizens of the university cities integral subjects of the struggle. This was expressed in a very offensive and interesting visual language, but above all in transparent offers to “participate”. In a very early phase of the ultimatum, public online events reported on the situations in the clinics of the respective cities. Somewhat later, the invitation was also moved into the physical space. The civil society of the cities could actively participate in the workers’ actions.

The slogan “More of us is better for all” sums up that there is ultimately a common interest between workers and (potential) patients.

The social media channels were also open for interested people, so it was possible to keep up to date outside the clinics. This relationship from “inside” to “outside” was also helpful to empower more and more workers to stand up for their interests in public. Central crystallisation points of this social connection were local rallies, a big delegates meeting of the different wards from the six university hospitals in Oberhausen in a football stadium and a demonstration in the state capital Düsseldorf with several thousand participants at the beginning of the strike.

The workers’ self-empowerment also leads to new ways of public relations. Workers visit politicians, turn to TV shows and in this way achieve a reach based on authentic appearances that was previously unknown.4

3. The timing of the action corresponded to the hot phase of the state election campaign in North Rhine-Westphalia

Elections for the state parliament of North Rhine-Westphalia took place on 15 May 2022. Usually, in election times, the general openness to various issues of social, political life is greater than usual. The workers have successfully used this openness, but also the need to distinguish themselves as parties or candidates, in their activities. Some important politicians of the opposition showed solidarity with the workers’ demand for a collective agreement on relief. 5

It was possible to at least put the issue of care and working conditions on posters and to support it with their own demands.

The resulting political pressure also had an effect in the government crisis: the current health minister of the state, Laumann, was forced to sign the petition for a collective agreement in Oberhausen in front of an audience (he even used the gesture of kneeling for this purpose) and a short time later to announce that there would be a collective agreement on relief.

4. Both the dimension of the dispute and the solution lie not at the workplace level but at the political level

By concentrating the organising activities on university hospitals in the country, the workers and the trade union leadership of the state and the federation aimed at the fact that these hospitals are “run” by the state as public corporations, even if they are corporations, as is usual in this country, which form the formal structure. This means that an agreement between employers and workers cannot be reached without the direct or indirect involvement of political bodies and authorities.

This has succeeded in politicising a trade union, workplace struggle, and not because they are addressing politicians.

This orientation is also necessary: it is the political framework conditions that determine the realities in the hospitals – regardless of the ownership. Both the financing basis of DRG-supported hospital financing 6 and the decades-long resistance of those responsible to abolish arbitrariness on the wards with the introduction of comprehensible, scientifically based standards have led to a steadily increasing intensification of the workload.

Workers react to this workload with a willingness to fight or to leave. Either way, a situation has arisen that individual hospitals can no longer cope with.

However, an important aspect of the now sharpened internal and political conflict is that the struggle of the workers has put the question of the capitalisation of the health care system on the agenda. With the focus of the workers and the trade union on a collective agreement relief with the explicit exclusion of salary aspects, this struggle goes beyond questions of company regulations: it is about, and this is also openly stated by the workers, that they imagine a health care system without profit, cost-benefit logics and top-down personnel policy. They advocate a concept of services of general interest that is oriented towards the needs of patients and workers.

It is obvious that the thousands of workers at the six university hospitals in NRW cannot achieve this goal without support from so-called civil society. With the opening up of the workplace dispute to the issues of the political framework, political alliances that have their roots in the (radical) left could connect with the workers: a precarious relationship could thus be (re)established. But: so far, the support of the left is still far too weak. It is necessary and useful that even more groups in their urban societies, especially where hospitals are or are even threatened with closure, relate to the workers on the ground, but also to those who have entered the struggle elsewhere, and link their own interests and goals with those of the workers.

Basically, what we are currently experiencing in the FRG is the transformation of a workplace dispute into a social/political dispute. The parties to the collective agreement are no longer directly involved, but indirectly those politically responsible in the state government and the parliament representing it. This means that “civil society” is also involved. The struggle of the health workers could be the starting point of a transformation from a company strike to a social strike. It is also up to us!

2   Although all organisers are members of ver.di, they are employed by an independent company during the current campaign.

4   On 19.05.2022, a worker appeared on the TV show on public television with Carolin Kebekus. Not only did the presenter frame the programme very positively, in the format of a “focal point” Katherina was able to explain in detail and very convincingly both the plight of the hospitals and the need for a collective agreement on relief.

5   The State Parliament has not yet been constituted as of the date of the writing of this article. The most prominent was certainly the SPD’s top candidate Thomas Kutschaty, but also Mona Neubauer from the Greens

6   A detailed discussion can be found here: https://www.krankenhaus-statt-fabrik.de/