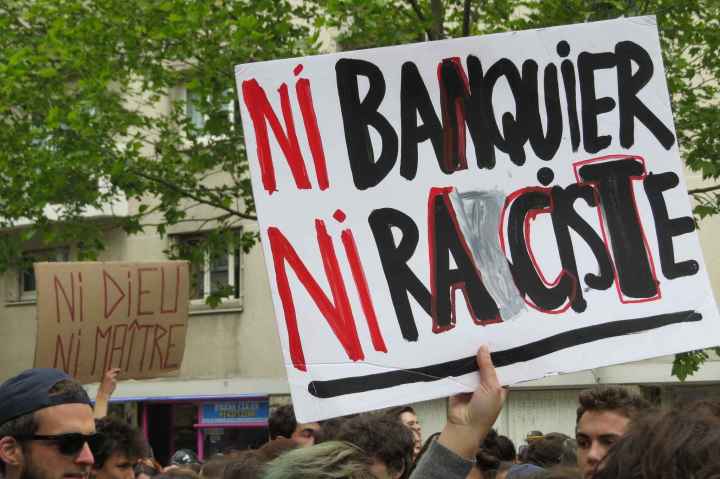 On 24 April, the French presidential election ballot will be held between outgoing President Emmanuel Macron, who obtained 27.85% of the votes in the first round, and the leader of the Rassemblement National (former Front National), Marine Le Pen, who obtained 23.15%. In this interview, Bchira – a militant of Collectif Sans Papiers 75 and Marche de Solidarité who participates also in the Transnational Migrants’ Coordination – looks at the electoral clash from the point of view of migrants, who will continue fighting against the racism of the republican institutions in the coming years, whatever the result of the ballot. Bchira explained to us that, in both cases, migrants will have to face a racist management of migration flows and asylum. While Le Pen envisages tight restrictions on migration and “mass” rejections, Macron aims at selective regularisation, based on working skills. Macron intends to welcome and integrate Ukrainian refugees and “qualified” migrants, faithful as he is to the principles of “democratic Europe” as well as to those of the neo-liberal labour market, while complicating the procedures for accessing Europe and France for everyone else: only asylum seekers will be allowed to enter. This is why the sans papiers of the Marche de Solidarités have called a demonstration in all French cities on 16 April to express their rejection of both candidates and their will to continue to fight for freedom, equality for migrants, access to documents and services. As Bchira makes clear, the treatment of the Ukrainian refugees has made evident the “double-speed reception” and the permanent racism towards those who have black skin or are Muslim, in France as in many other European countries. The migrant perspective proves, once again, to be the one needed to grasp more radically the political transformations taking place not only in France, but throughout Europe.

On the evening of the results of the first round of the presidential elections in France, the undocumented migrants’ collectives of the Marche de Solidarités announced a demonstration for 16 April to say no to both parties and candidates. Macron’s five-year term has been catastrophic for us: the 2018 law, the repression carried out at the borders and the closing of prefecture desks to undocumented migrants in order to stop the applications for regulatization have pushed us to mobilise en masse, especially during the pandemic, and we have had no results, no one to talk to. In addition, above all, Macron imposed on us the ban on returning to the French territory (IRTF) which falls on undocumented migrants, based on racial profiling: that for us is a hunt for migrants. Since 2018, it was very rare for someone to have an IRTF, it was for people who committed a crime. Now for a simple facial check in the street you can receive an obligation to leave the territory for three, four months, or even one-year with a ban on returning, and if you do not leave the French territory you will never be regularised. Even if you leave and come back, your whole dossier is cancelled, and you have to start again from the beginning. It’s a banishment. But that didn’t exist before. Now if you are forced to leave the territory, you will also find the border regime tightened.

When you are in France, there are no more appointments for the regularisation of the permit. Now there is a market for selling appointments: 700 euros/1000 euros to have an appointment, which is obviously impossible for an undocumented migrant. In addition, if you manage to get an appointment and there is a document missing, you have to ask for a second appointment. There are people who lose their residence permit because they can’t find an appointment to renew it. So, we have made a catastrophic assessment of Macron’s government.

On the other side, we have Marine Le Pen with her racist and fascist ideas. That’s why we announced the demonstration on 16 April. On 12 April, there was a unitary meeting called by the Ligue des Droits de l’Homme [Human Rights League] with many associations and trade unions to effectively call for a common unitary demonstration against the extreme right and Macron’s policies: so we were all together in the same march.

In relation to the two electoral programmes: we spent five years with Macron, when we have experienced the strengthening of procedures against undocumented migrants, to the point that his Minister of the Interior Darminin, during a debate, said to Marine Le Pen “you are too soft”, that is to say “you are not firm enough with migrants”. Macron said that the multi-annual residence permit will only be accessible to migrants who master the French language and who work. Macron’s racism is no weaker than Le Pen’s.

Today we are faced with the Valls memorandum, which implies regularisation by work, by presence on the ground, by children’s schooling: with Marine Le Pen all this will no longer exist. Moreover, it’s not even a law, it’s a memorandum. Le Pen is racist, it’s a very dangerous situation both for migrants and non-migrants: it’s going to be the persecution of everyone.

Regarding  the Ukrainian refugees, our position was clear from the start: we are all against the war, for the freedom of movement and the freedom to stay for all. The reception of war refugees is guaranteed by the international convention of Geneva from 1952, it is the right of asylum, which is for everyone. What really hurts us was that from the first days of the war we saw how the French welcomed with open arms the Ukrainians, with speeches that said “they are like us, they are civilised, they are white people with blond hair, they have the same culture, they are Orthodox Christians, so they are like us. They are not Muslims or blacks or Arabs». We saw a selection by skin’s color. These discourses hurt us. Some black comrades couldn’t renew their rent because they had to make room for the Ukrainians. So, even if you’ve been here for five years and you’re working, you’re going to have a lot of difficulties. It’s a double speed reception, it’s a humanitarian sorting, while the right of asylum must be for everyone! Activist lawyers would like to extend the right of asylum received by Ukrainians to all undocumented migrants, but we will see what we can do.

After the second round, we are aware that for us the struggle will continue and will intensify. If we have to face Macron with his policy, we will be here, organising on the ground, fighting for the regularisation of everyone, the opening of migration desks in the prefectures, and a dignified reception for everyone. We know Macron’s policy and we are here to continue our struggle. If we have Marine Le Pen, the struggle will probably become more and more difficult, and we will have more repression. Since the 18th December, in the context of the electoral campaign, facing racist discourses on migrants, the Marche de Solidarités has launched the Anti-racism and Solidarity Campaign. Now we have 400 signatories. We have responded to a call for collective anti-racist struggle, the campaign is national, but it could be international. We all have to organize together in the neighbourhoods, in the schools, in the universities, in the cities and villages in the framework of anti-racism and solidarity against fascism and racism.