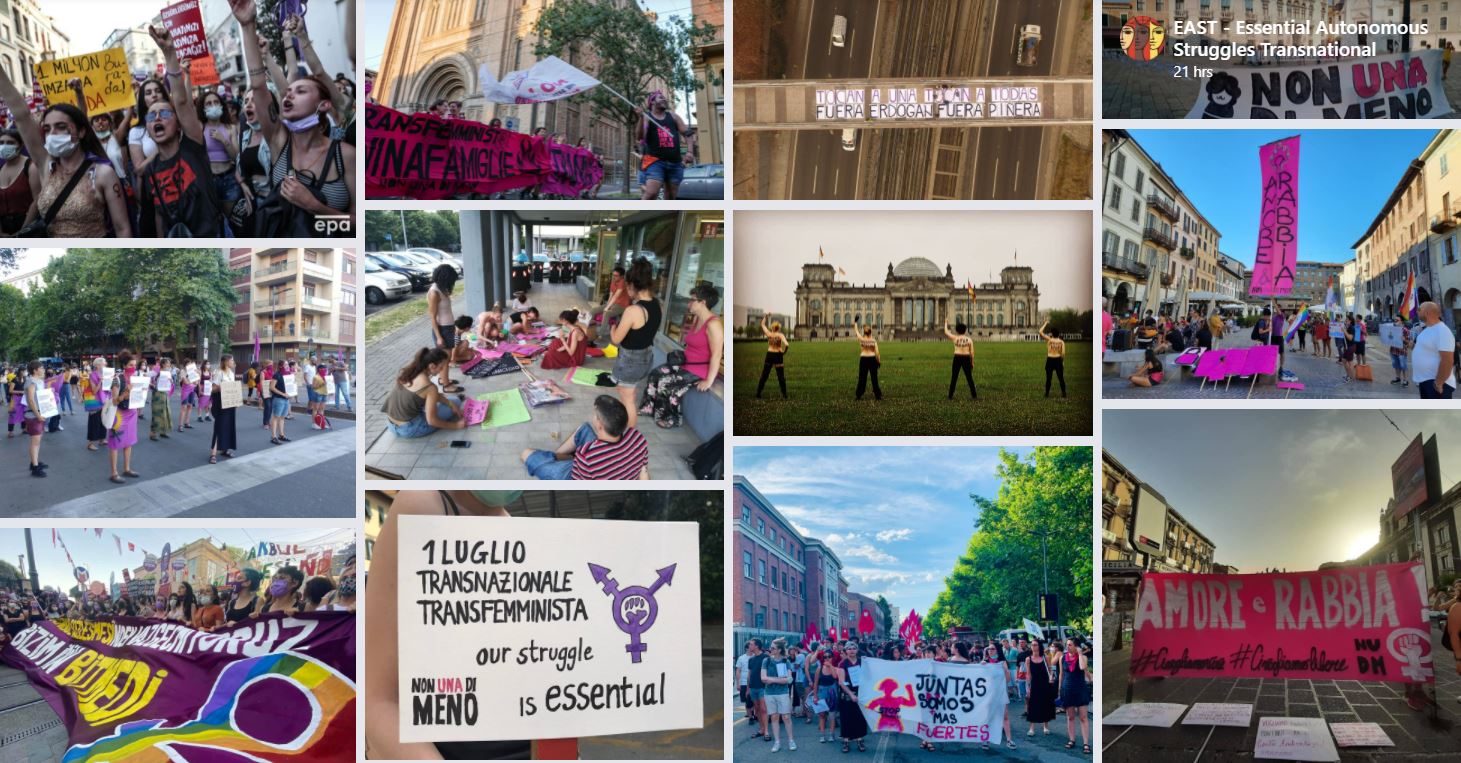 On 1 July and over the following days several cities in broader Europe and Latin America joined the transnational mobilization against Turkey’s withdrawal from the Istanbul Convention and against all patriarchal attacks on women and LGBTQI people. In numerous cities in Turkey, France, Italy, Argentina, Chile, Germany, Greece, Slovenia, Czech Republic, Morocco and Sweden marches, flash mobs, rallies, online and offline actions took place.

Thousands of women, LGBTQI folks and allies took to the streets to say loudly: ‘We are not afraid! The Istanbul Convention is ours!’ The brutal repression of the demonstrations in Istanbul and other Turkish cities shows that the government fears the growing feminist transnational organizing. The arrests and assaults against women and LGBTQI activists during the protests of 1 July and during pride demonstrations are a sign of weakness of state  institutions and this demands our strong transnational response. The comrades in Turkey put it clearly: against police and state violence, against murders and aggressions against Kurdish people, against patriarchal and domestic violence legitimized by the withdrawal from the Istanbul Convention – we won’t be silent! The streets are ours and we won’t leave them!

In different European and Latin American cities, also thanks to the work of Transnational Migrants Coordination and Feministas Transfronterizas, migrant women have joined the transnational day of action with their claim of freedom. They underlined that Erdogan’s decision to pull out from the Istanbul Convention undermines asylum rights for refugee women who have undergone rapes and all kinds of violence. Erdogan and the ruling AKP-MHP regime are  responsible for the criminal policies against migrants and refugees. The European Union, by granting billions to Turkey, is fully complicit in their murderous actions. Our struggle for the Istanbul Convention is a struggle for migrants’ freedom too.

On 1 July we declared that our lives are essential and that we refuse patriarchal and state violence in the houses, in the workplaces, on the borders, in our journey to reach Europe and in the public space. The exit from the Istanbul convention  and the alliance of ultra-conservative and neoliberal governments, as well as their familistic policies mark the aim and attempt to put women back to their place, curb their sexual and other freedoms and to reinforce subordination and oppression. Everywhere during the pandemic women have paid the highest price: increased workload and interminable shifts, high unemployment, rising domestic violence, racist threats and evictions. At the same time, in Central and Eastern Europe we witnessed an upsurge in the criminalization of LGBTQI people, but this violence is not limited to these countries. But we have said clearly that if our work is essential, our lives and our struggle are essential too! We have risen up against sexist, exploitative and racist hierarchies and we will not accept to be silenced.

1 July is not the end of our mobilization across the borders: we will continue organizing and building together a transnational process that aims to disrupt the patriarchal violence,  institutional racism and neoliberal exploitation.

Have a look at the photo gallery of the day of action: https://www.facebook.com/media/set/?vanity=EASTEssentialStruggles&set=a.277916930796738