Struggles in Turkey for the Istanbul Convention towards July 1st 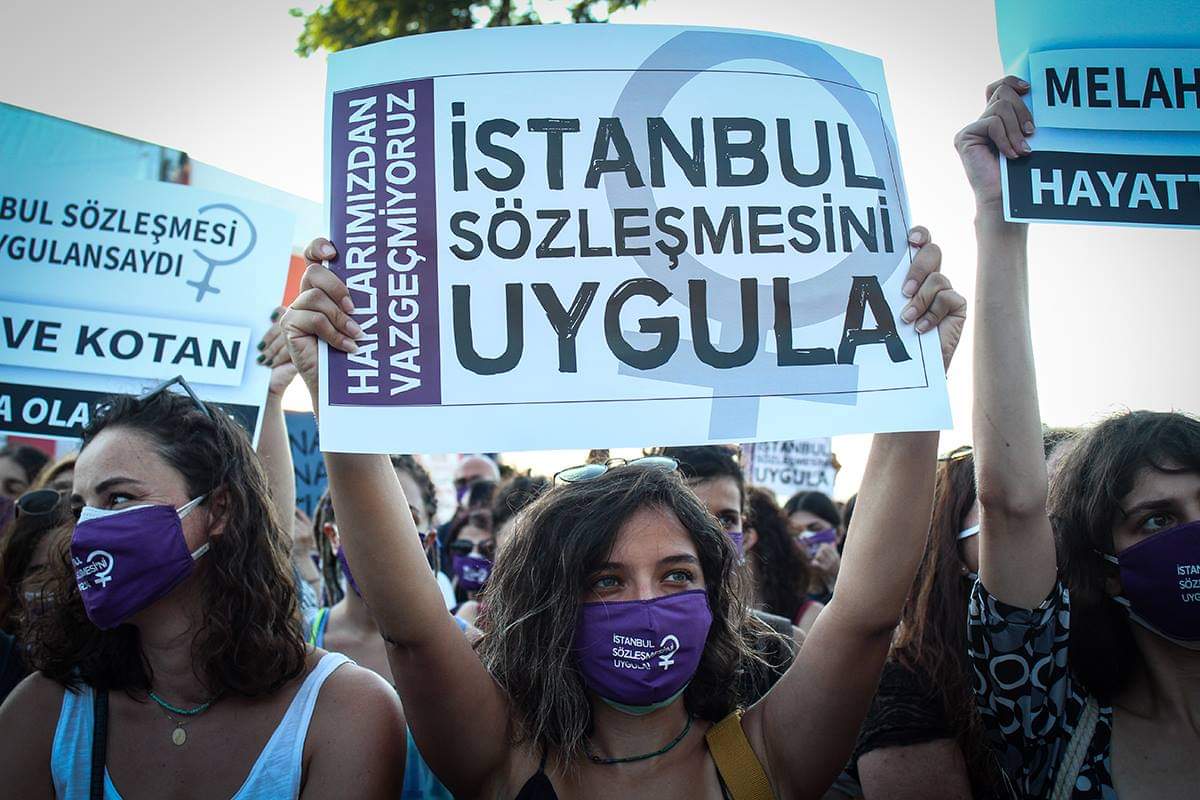 It would be accurate to start with that in Turkey, the measures for the COVID19 pandemic have been the pillar of fascism. Of the so-called measures of the Pandemic the curfews have been helpful in preventing the social struggle and the opposition in Turkey. In the first months of the curfews, the operations against the opposition included a serious series of arrests of the feminist, revolutionaries, and youth of Turkey. The law on the execution of the sentences has changed for the politicians’ political massacre, the political prisoners have been left to die in the prisons, the rapists and murderers of women and LGBTIQA+ people have been released. The pandemic has been the grounds for the dismissal and imprisonment of the HDP MPs Leyla Güven and Ömer Faruk Gergerlioğlu, the incarceration of the politicians of HDP and two lawsuits to close down HDP.

Of course, not all were safe and sound in their houses; the workers continued to take their places in the production line and the curfews for the youth stretched to practically allow child labour. They have tried to incarcerate workers in the factories to avoid the interruption of the COVID-19 pandemic towards production. Since the first days of the pandemic, curfews have been the means for the seclusion of women and LGBTIAQ+ people. This seclusion, of course, came with the crucial burden of the free, domestic, reproductive labour.

In the following months, the curfews turned into the means of surveillance of daily life and practically banned the protests and rallies, even though there were limited curfews and the production continued as always does. The HES (Hayat Eve Sığar – Life Stays at Home) codes are developed to be used to prevent the spread of the virus, on the other hand, following every step of every person by matching their ID numbers, credit cards, smart tickets and so on.

However, life does not fit into homes, particularly for women and LGBTIAQ+ people for whom it is a crime scene. It has been stressed by all the women in Turkey that during the pandemic, domestic labour and the massacre of women and LGBTIAQ+ people have increased dramatically. The Minister for the Family and the social policies (as women are just part of the family and there is no Ministry for Women in Turkey) has announced that the increasing violence towards women during the pandemic is ‘tolerable’.

The same malicious scene goes for the workload of free domestic labour and thus the exploitation of women. There have developed examples of caretaking in rotation among working women as a strategy of surviving the precarity and flexibility of work hours imposed on women, as there have been no welfare measures to address the impact of the pandemic on women. If anything, with the lack of “reconciliation” of the working from home and an increasing load of work in the home, education from home has appointed the women as the new teachers of the day. The free domestic labour of women has burdened women with taking care of children in the daytime.

It is indispensable to state that LGBTIAQ+ people are one group to see the worst attacks of fascism. During the pandemic government’s official stand on the policies for the protection of the LGBTIAQ+ people has shifted from denial of their existence to declaring ‘LGBTIAQ+’ as a ‘terrorist organisation’. The flags of the LGBTIAQ+ movement, especially the rainbow flag, have been criminalised and banned in protests. The students of Boğaziçi University have been taken into custody for carryingy the flags, and the students and their attorney have been asked if they are ‘members of the LGBTIAQ+’ in court. LGBTIAQ+s have been attacked by the police while entering the 8th of March Rally and detained after the rally. Ali Erbaş, the Religious Affairs Administration chair, has accused the LGBTIAQ+ community of being responsible for the spread of the pandemic.