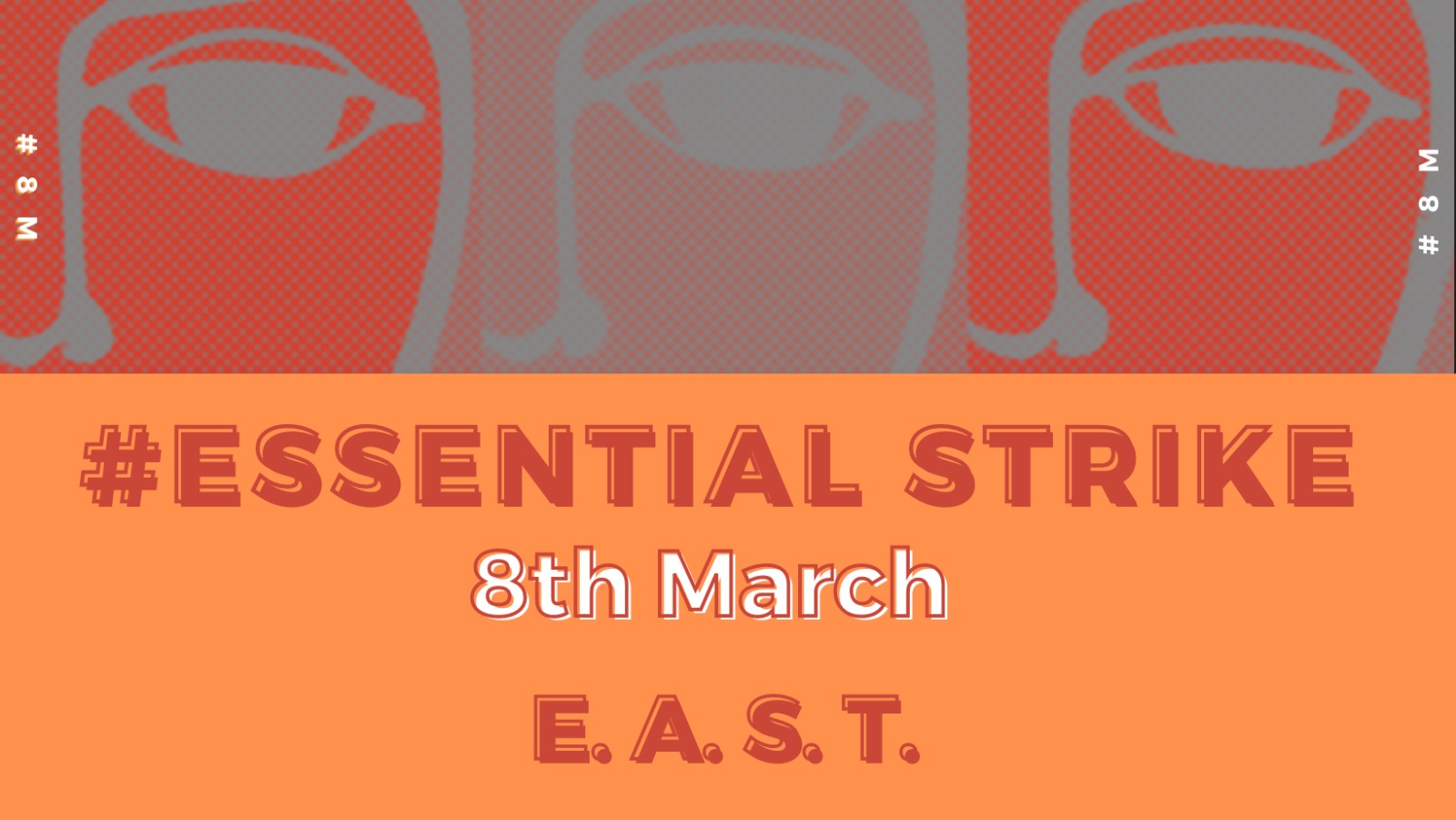 Watch here the video of the assembly: https://fb.watch/40v_TKtAD_/

This year the feminist strike of the 8th of march is more essential and urgent than ever, because the pandemic management by institutions made it clear that the work of women and migrants is essential but their lives are considered expendable. To turn the force of essential labour into a collective power is the bet of the Essential Strike Manifesto, which was signed by dozens of collectives, unions and feminist and LGBT*QI+ organizations from Central and Eastern Europe, Western Europe, Turkey, Georgia, and beyond. It was translated in 21 languages, republished on several national and global platforms, and triggered debates in many countries, even where the strike had not been on the agenda before, or where authoritarian governments, legal obstacles and lack of support from the unions make it hard to organize. The Manifesto was the starting point of the public assembly of EAST, where more than 70 people from dozens of countries also beyond Europe – from Bulgaria, Greece, Poland, Argentina, Romania, Italy, Morocco, United Kingdom, USA, Serbia, France, Czech Republic, Germany, Portugal, Turkey, Georgia, and Iran – participated while just as many watched it online. We discussed how to take back the strike as a powerful process of disruption of production and social reproduction. Multiple initiatives contributed to the process of the essential strike on the 8th of March, which we want to make the moment when many existing struggles will find visibility and will show that they are connected on a transnational level. We know that this year we face new dramatic challenges because of the pandemic, but nonetheless the pandemic has been also a chance to strengthen transnational connections. We can say, starting from our different contexts and experiences, that this 8th of March will be just the beginning of a common process in which we take back the strike as a weapon and we’ll do it by organising transnationally.

The strike is made difficult by unfavorable strike and labour laws, by emergency measures, by poverty, precarity and isolation, and yet many strikes and protests have been taking place in the last months. Many addressed the fact that while we have witnessed the intensification of exploitation, patriarchal violence and institutional racism hitting the most those essential workers – mainly women and migrants – who are allowing the society to survive, the pandemic was also the moment when many struggles emerged in the health-care system, warehouses, agriculture. The Polish women’s strike against the ban of abortion gave new impulse to the global feminist movement. In Poland, the demonstrations made the strike the instrument to claim higher salaries, better working conditions, safety at work, welfare and healthcare, but also to show that what happens on the workplaces is connected to the social hierarchies and conditions that make the work of women and migrants less socially and politically valuable. Patriarchal, racist and exploitative conditions start in the society and houses and affect the conditions in the workplaces: this is what our strike should be able to address and fight.

In Bulgaria, Romania and other countries the nurses and doctors have been striking for protections, wages and a better healthcare for all. In Georgia women are protesting against rapes and abuses and against the blackmail of low wages due to which many women need to go abroad to work and are then accused of abandoning their families and indirectly held responsible for male violence. All over the Balkans #metoo protests are also contesting the upsurge of violence and harassments in the houses, educational institutions and in the workplaces and organizing to turn individual struggles into collective ones. In Turkey, women are at the forefront of a struggle against Erdogan’s authoritarianism, against fierce attacks on women, migrants, refugees, Kurdish people and, even if the strike is not allowed, will speak out loud in many cities during the night marches on March 8th. In Romania, rallies and marches are focusing on the terrains of violence against women, housings, mental health, labour, care, but also against the discrimination and marginalization of Roma communities. In Greece the strike involves public sector workers, women, migrants, refugees and unemployed to claim public space. In the UK the women’s strike will unite with the protest of childcare and sex workers with the general contestation of double burden of productive and reproductive labor that worsened the conditions of women. In Italy Non Una di Meno will take to the streets to contest measures like the Family Act, unbearable workloads for teachers, mothers, logistics and service workers, increase of domestic violence and femicides, and to raise the voice of migrant women fighting the additional violence of the residence permit.

In countries like Germany and Belgium migrant women are organizing meetings to organize different forms of protest against the intertwinement of racism, exploitation and patriarchy. After migrants’, women’s and worker’s strikes in factories, warehouses, agricultural fields, the workers of Ibis Hotel in France and Yoox workers in Italy are disclosing racism and sexism as tools to reinforce exploitation as women and mothers. In France and Morocco migrant, undocumented and refugee women have not been silent and shout out against violence in all its forms: institutional violence perpetrated across the borders and in detention centers; male violence reinforced by the link between residence permit and family reunification; the violence of exploitation that imposes to migrants the most precarious, poor and unsafe jobs. Together with Transnational Migrants Coordination, migrants have showed that 8M is the occasion to fight together racism and patriarchy in a feminist and migrant struggle, and to relaunch the transnational initiative for the 1st of May.

The call for an essential strike opened up spaces of political communication and raised the question of the transnational dimension as a possibility to pursue in order to be stronger together and share common terrains of struggle. Higher wages against hierarchies created across the borders; a transnational battle for welfare that frees women from their supposed destiny as caretakers; housing for all; unconditional and unlimited European residence permit against institutional racism; stop to patriarchal violence. In this direction we are happy to join forces with Feministas Transfronterizas, who build bridges between Latin America and Europe and are welcoming further connections with feminist and transfeminist networks to strengthen a transnational movement against patriarchy, racism and capitalism.

The strike is a process that does not limit to one day, and it is a horizon to pursue in our daily struggles. The 8th of March is just the beginning: the strike activated a horizon of possibility even where mobilizing seemed impossible. We want to continue discussing how to realize a transnational social strike to connect existing and emerging struggles in the field of social reproduction, calling unions to support this attempt. We are planning further moments of discussion to strategize together and build the process of the strike in the phase of the pandemic reconstruction. We want to go towards a transnational strike that starts from the field of social reproduction seeking connections with other ongoing struggles – migrants, Amazon workers, riders, logistics workers and more…

Let’s strike together on March 8th, let’s build our transnational connections during the reconstruction: our strike is essential!

We have a common facebook event where we gather all the initiatives on the 8th of March. We invite everyone to post a picture with the slogan “our strike is essential”, both in your language and in English, and to use the common hashtags #EssentialStrike #WeStrike. We encourage common practices like pañuelazos, collective scream, use of violet and green as colors of freedom of abortion, and other symbolic actions to make the connection of our struggles visible. Send us info on what will happen in your city/country on March 8th to essentialstruggles@gmail.com and share your events with us on fb: EAST – Essential Autonomous Struggles Transnational.