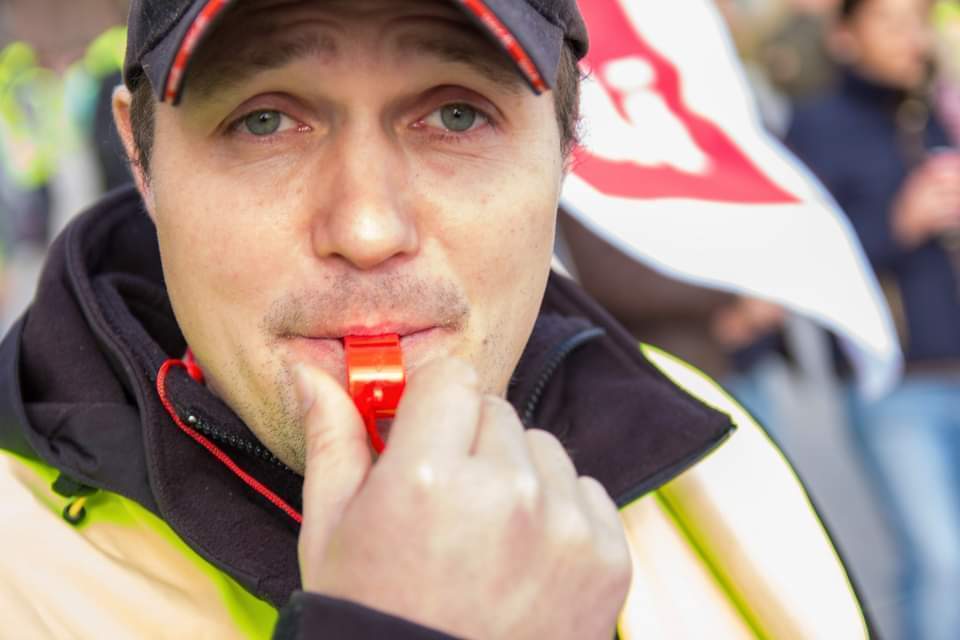 We republish the interview to Christian Krähling that opened the journal “Strike the Giant! Transnational Organization against Amazon” we published in 2019. Christian, founding member of Amazon Workers International and at the forefront of the struggles against Amazon in Germany and internationally, left us way too soon last December. We take the chance to honor and remember him by disseminating again his words that express perfectly the vision at the basis of the amazing connection of Amazon Workers International. Christian has inspired us and so many people with his determination to “think big” and join forces across the borders. With Christian, we think the task ahead of us, against Amazon and beyond, is exactly this. On February 21st we’ll take part in the event organized to remember him.

Transnational Social Strike Platform: In the last years German workers have been at the front of the struggles against Amazon. Can you tell us something about the current situation of the struggle within Amazon warehouses in Bad Hersfeld and generally in Germany? What have been the things you achieved? What are the main problems you are facing?

Christian:  The current situation remains difficult for us in Bad Hersfeld and in Germany. We still work to organize a majority of workers to join the strike movement. At the moment about one third of the workers in Bad Hersfeld are joining the strikes. Although we make good efforts in gaining new union members, it’s still not enough to completely stop the deliveries from our warehouse. The fluctuation of workers is quite high. The situation in whole Germany is even worse, because Amazon is opening up a lot of new warehouses and sortation centers. All the people working there have temporary contracts and won’t join the union or go into struggle before they have permanent contracts, which generally takes 2 years. But we knew right from the beginning, that this struggle would last for even 10 years or more and all the shop stewards and strikers don’t get tired to move on.

When we started our struggle, Amazon started to react. After years without any wage raises, we get raises on a regular base every year, which orient on the raises of the collective agreements in Germany. The management also implemented a Christmas bonus and pays different bonuses during the peak time. Also, they started to work on emending the working conditions. They built air conditioning systems and started a health program in order to make the workplaces healthier. With the work council, we managed to get rid of the feedbacks, so the pressure to perform is not as high as in other Amazon warehouses. But for me, the best achievement of our struggle is that a lot of workers got self-confident and dare to ask critical questions or scrutinize the decisions made by the management. Although we made all these achievements, we still have the problem, that the management doesn’t accept the fact that the workers are organized. They don’t want to negotiate with us.

TSS:  After the strikes started to hit in Germany, Amazon decided to expand in Poland to counteract the damages produced by the strikes. When the Polish workers started to organize and denounce the fact that they are turned into a mass of involuntary ‘strike-breakers’ and paid well less than the German workers, you decided to join forces. How did this connection begin? What have been the most relevant moments of this alliance?

C:  The effect of Amazon’s expansion to Poland on our capacity to organize was that a lot of the workers were anxious about Amazon leaving Germany and losing their jobs. When the first warehouse opened up in Poland it was all over the news in Germany. I saw people crying at the parking lot of the warehouse after they heard about it on the radio. We had a hard time that year organizing new members, but we didn’t lose any.

We started trying to connect Amazon worker’s internationally right from the beginning of our struggle, but we didn’t have any contacts to Polish workers. The next year after Amazon opened up in Poland, we received an Email from Polish Amazon workers who started to organize and heard about our struggle. They wanted to exchange experiences. Things went quite fast then. We invited them to come to Bad Hersfeld, where we had our first meeting. During this meeting, we realized that we have the same problems, that Amazon treats us the same way but also how they use the different labor laws of our countries against us all. I think this was the most relevant moment of the alliance. We started to exchange information on a regular base. During this process the connection also evolved on an emotional level. For us, the workers from Poland are close friends now and I’m very happy that this is spreading to the other countries.

TSS:  Since then, more workers from around Europe, Spain, France, Slovakia and now from the US are joining the effort of building a common strategy against Amazon. In July, on Prime Day, Amazon workers went simultaneously on strike in different parts of Europe and in the U.S. How has this connection worked so far? What is your evaluation of the potentiality of this kind of transnational coming together?

C:  We had similar actions before the last Prime Day. There were big strikes in Europe during Black Friday 2018, when workers from Italy, Spain and Germany went on strike on the same day. Also, we joined forces to demonstrate together with German, Polish and Spanish workers in Berlin, when Jeff Bezos visited the “Springer-Haus” to receive an award for innovation. It’s very easy to organize common actions during these important days for Amazon, since it’s logical for every warehouse to do some action on these days. We have direct contacts via social media and can easily exchange information. When we hear that the Spanish workers will go on strike, we probably decide the same. I think for the future of our struggle it will be crucial to coordinate these kinds of actions, since it’s more likely that the Amazon management in Seattle will have to react to it. They can’t ignore that Amazon workers worldwide have the same kind of demands and are joining forces. This also gives a new motivation for local organizing.

TSS:  In the struggles in Amazon warehouses some key issues have come to the fore as the crucial ones: wage levels and wage differentials, increases in workloads and work intensity, temp and precarious contracts. While so far these issues have been tackled on a local or national level, now the problem in front of the transnational Amazon meetings is how to tackle them in a common way. How do you think this can be done? What are the main obstacles to be overcome and the main tools that can be used for doing this?

C: I’m not sure if these issues are the crucial ones. But these are the issues which are capable to build the framework for an international strategy. The problem is, that the struggle can only be won on an international level while the local unions don’t have an international strategy. We now took the first step to define common goals. The next step would be to find common tools and work out the details. The main obstacle is to put our plans in a concert with the local organizations and to find an organizational framework. At this moment, we’re not at the point where we are directly facing this obstacle. I think the main tool to overcome it is to build a realistic plan, which can be accepted by the local unions. We have to openly communicate with them. The next months will show how it works…

TSS:  As the case of the use of Polish warehouses for the German market shows, Amazon is relying on wage differentials between countries to increase profits. Besides, as last year’s rise to 15$ of the minimum wage in the US warehouses shows, pay rises are used either to attract people to work for Amazon when there is the need of or to justify the intensification in work rhythms or to stop struggles. How do you think that a transnational struggle over wage can look like?

C:  A transnational struggle over wage would just be a part of our struggle in general, so this is a tactical issue. We could decide to start a worldwide campaign over wage raises at Amazon, defining either one big goal or different goals for every country. We could use the same logos and slogans etc. Different kinds of actions with the same motto could be done (e.g. strikes, walk outs, demonstrations, leaflet-actions). But I don’t want to go in detail now, before we have concrete plans.

TSS:  Do you think the demand for an equal wage for all Amazon workers could be one relevant way to overcome the differences between workers throughout Europe and throughout the world?

C: I don’t think the wages are the most important fact when we speak about differences between the workers throughout the world. We have different labor laws in every country, thus there are a lot of obstacles for organizing on a transnational level. E. g. it’s much easier to decide to go on strike in Germany than it is in Poland and with the US-workers getting involved more and more, it’s getting even more complicated, although we’re very happy about that. Also it will be very difficult to develop the demand of an equal wage throughout the world, since the workers in the local organizations have to acknowledge this as a realistic goal. But if we manage to overcome the obstacles and find a way for demanding an equal wage, I think it would be a great tool to pre-vent that Amazon can pit the workers of the different countries against each other.

TSS: What are the main challenges facing a transnational struggle against Amazon today? In your opinion, what are the necessary steps that need to be taken in order to adopt a common long-term strategy?

C: First of all, I have to tell that we in Bad Hersfeld didn’t even dream about coming to the point where we are now as we started organizing with a group of 15-20 people back in 2011. Today we have a huge working network with organized Amazonians, unions, supporters, journalists and also artists from all over the world who are working on this with much dedication.

Every single Amazon worker knows that big achievements can only be made with pressure on a transnational level. So we have to create a common vision first, which I think is happening at the moment. From this vision we have to form an organizational framework and build our strategy along common demands, which should be acceptable for the local organizations. From the other side, the local organizations have to be more flexible and think bigger. Also the exchange between workers from the different countries has to be brought to a wider level. We need to get more workers to travel to the different countries to visit their colleagues and to exchange experiences of all kinds. This will promote a broader feeling of what solidarity really is. You could say, if the organizational frame is our body, then solidarity is our soul. I think after our last transnational meeting we are on the right way to achieve this, although we’re still at the beginning…