Our Pandemic Transnational Revolt: Organizing Struggles in Europe and Beyond 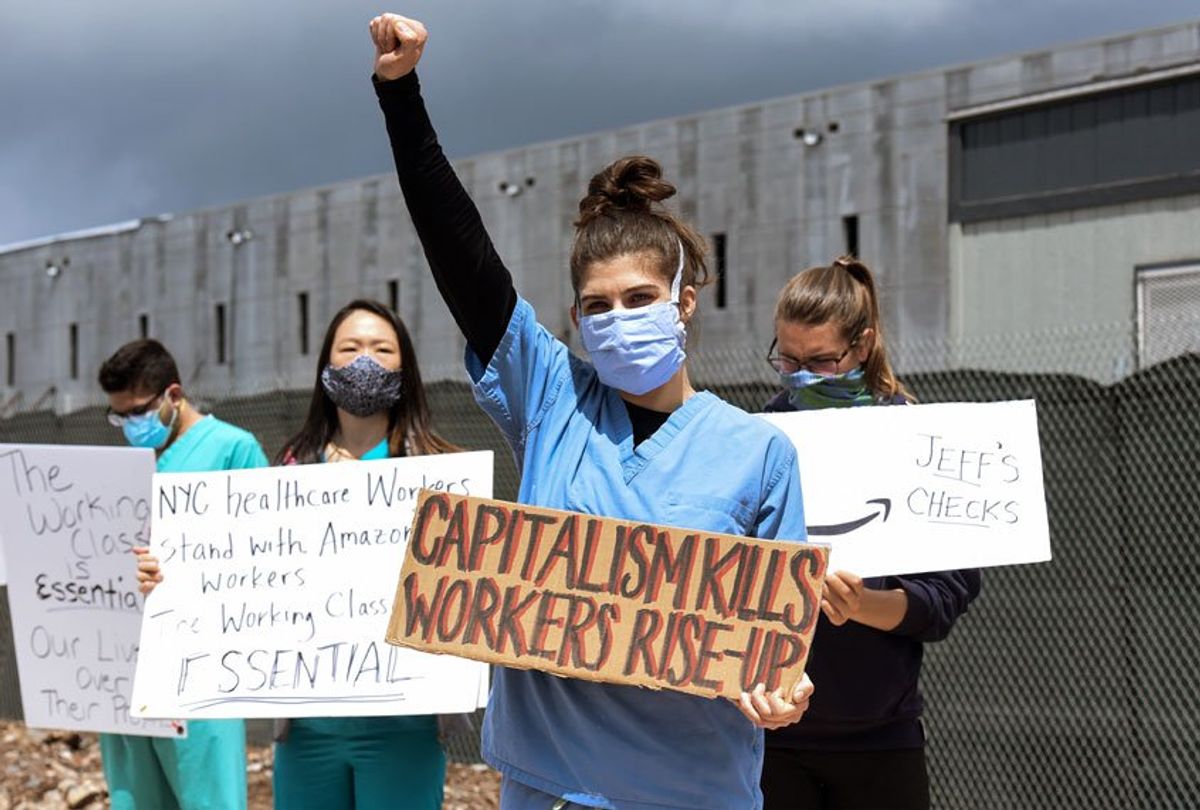 How do we struggle on a transnational scale and why is it so important? This question haunts the TSS Platform since its foundation. Over the years, we tried to answer this question by fostering political initiatives across borders on some crucial terrains such as the logistics of exploitation, social reproduction and migrant labor. It was clear to us that the transnational challenge can’t be limited to a mirroring of the international one. When we opted for this name, we intended to argue that internationalism is insufficient to grasp the contemporary interconnection of struggles and social movements. The transnational perspective therefore was, and still is, the name of a political position and at the same time an indication of a challenge and of a possibility. The transnational is not the sum of national spaces, not even the mere recognition of interdependencies. The Transnational is the political space we live in, the hierarchies exploiting our lives and the dimension of our struggles. The transnational is what constitutes the concrete chains of power against which we fight. Since we launched the challenge and the project of the TSS Platform, we embarked on different paths of struggles with the aim of bringing the transnational to the surface, making it visible and turning it into common political action. Today, we think to be closer to answering our initial question.

After the “A Day without Us” in 2006 in the US and 2010 in Italy, France and other European countries, migrants’ strikes showed the possibility of a new politicization and socialization of the strike, going out of the factory gates to invade society. At the same time, when it takes the shape of the strike, social insubordination goes back to the workplaces and produces new forms of conflict inside them. With their struggle pointing at the same time against exploitation, institutional racism and border violence, migrants made visible the need to widen labour struggles and attack the conditions imposed upon them by state laws, European policies and international agreements.

The strikes of Amazon workers in several European and US plants, which increased during the pandemic, are demonstrating since 2015 the need for transnational communication and struggle against a global giant, and the possibility to address the national and local divisions and social hierarchies that enable multinational companies to surf over differences to impose their own rule.

Women’s strike, which began in 2016 in Poland as a contestation of women’s subordination and male violence, has rapidly turned into a global feminist movement that contested the overall patriarchal condition of neoliberal social reproduction.

These movements did not only bring the strike back in but indicated what is the dimension that our initiative should target. As the TSS Platform, we considered Europe as our initial field of struggle but pointed at the need to reframe the scale of the political initiative of social movements beyond the limits of EU institutional borders. While we’ve been involved in the contestation of the European Central Bank, we realized that the power of the EU was already being displaced from its institutional centre to a more complex logistics of exploitation, where the Eastern European region and its ‘outsides’ play a decisive role. After organizing the first TSS meeting in Poznan, Poland, in 2015 we invested political energies in connecting with struggles happening in the Eastern regions, from Georgia to Bulgaria to Slovenia. Looking at the EU from its Eastern and bordering countries has been a way to see the links and connections between subjects and struggles that appear otherwise isolated. Dislocating our gaze from “the East” allowed to highlight the structural integration between factories and logistics firms employing posted workers and migrant workers from within and outside the EU; the transnational chains of care and social reproduction of which women – above all migrant ones – bear the burden; and the different conditions related to wage, contracts and benefits that constitute the European transnational labour market and the background for our rising network of essential struggles. Looking from this differentiated labor market is also a way to start grappling with the political riddle of Brexit: far from being limited to an institutional process, Brexit is shaking this very labour market, impacting on the forms of mobility of EU and non-EU migrants alike, the chains of production and the dislocation of financial markets.

COVID-19, a virus that knows no borders, haunts human mobility and runs through the logistics networks, has presented us one more time the need to face a complex and articulated transnational reality. The response to the pandemic, organized by states and capital, has tried to keep the economy running while restraining all that is considered as not strictly necessary to its goal. Freedom is now explicitly measured in terms of productivity: until the pandemic is over, we are told, we need to accept limitations to our freedoms, except the freedom to be exploited and to secure production.

At the same time, with the promise to provide an exit strategy from the COVID-19 crisis, global institutions are offering loans that will force many countries to cut public services and wages in the upcoming years. New dependencies are being created behind the chronicles of the pandemic. Austerity isn’t over globally, but in Europe, like in the US, stimulus packages are pumping trillions in public spending as have never happened in previous decades. The main goal is that of avoiding the further shrinking of the general economy, but, together with this, governments are trying to keep the order of society and avoid wider discontent. In some countries layoffs have been temporarily suspended, at least for those having a labor contract, unemployment funds have been created, evictions have been delayed. Yet, with the alleged aim to prevent overcrowding or ensuring the continuity of essential services, companies are extending the working day, restructuring shifts, demanding increased flexibility and imposing heavier workloads. With the explosion of e-commerce, the pressure on logistics warehouses, drivers and riders keeps growing, and social distancing has become a new way to control workers that try to meet and organize. While some are left home, others are hired with contracts lasting for just a few days in order to respond to the request of the market and meet the rising number of orders for online shopping. Today, recovery policies take for granted that domestic labor is on women’s shoulders and rely on the fact that migrant women – very often excluded from the recovery benefits – will anyhow fill the gaps. The labor of migrant women, from outside and within the EU, is the hidden tenet that makes it possible to pretend to solve the emergency by expanding the use of smart working and squeezing essential workers. And while Europe has almost closed its borders to migrants, forcing them to endure dangerous journeys in order to cross the sea, mountains and rivers, in different countries a failed reception system, which is the direct result of European reaction to the migration storm of 2015, has become a new pool of cheap labor, with even asylum seekers employed as temporary workers. The pandemic highlighted that, within the transnational space we live in, patriarchal and racist violence, the laws and measures against migrants and women, the limitations to the freedom of movement and to sexual freedom, have major backlashes on everyone’s working conditions and on everyone’s capacity to organize.

On our side, the response to the pandemic has been wide and varied. Blockades, strikes, protests have marked particularly the so-called first-wave of the pandemic: from Amazon warehouses to metalworking factories, from logistics hubs to services, from migrants protesting the conditions inside reception centers to the women occupied in the chains of care. Starting from these struggles we need to ask ourselves what kind of transnational politics do we activate to counteract the fact that the handling of the pandemic by states and capital is actually strengthening existing hierarchies of exploitation and oppression. There are ongoing struggles of migrants for a European unconditional and unlimited residence permit that aim at overcoming the borders imposed by national and supranational policies on migration; we see ongoing albeit isolated strikes of nurses, domestic workers, social workers, cleaners, mainly women, protesting against the mix between exploitation at work as essential workers and patriarchal violence; in the warehouses all over Europe and beyond workers struggle for higher wages and for more safety at work. What is at stake is the possibility to further consolidate a political platform where all these experiences can be made stronger and communicate with each other. As the TSS Platform, we think this is still the challenge facing us. We think that the perspective of local and national struggles remain limited, and we need to take advantage of the pandemic to strengthen our transnational and global capacities. After the financial crisis of 2008, revolts and uprisings have multiplied, demonstrating that their participants are part of social movements that are in no way local or national, but have transnational enemies, addressing transnational problems that resonate with each other across borders. The fight is going to be hard, but we can’t waste yet another crisis to retreat on safe ground. After years of revolts against the neoliberal agenda, institutional racism, patriarchy and authoritarianism, now it’s time to take the transnational scale of exploitation seriously, and to make the transnational scale our primary space of action.

In the recent years we have gained plenty of experiences that have reinvented the strike as social, migrant and feminist and showed the possibility to fight on  a transnational level. Building on these experiences, we must keep discussing and organizing the transnational strike as a process and not just conceptualised as a single event. If we want our collective voice to become the dominant character in the post-pandemic reality, if we want to disrupt the reproduction of the hierarchies of exploitation, if we want to unleash our power, we must insist in bringing to light  the transnational processes that shape even our everyday experiences. We must keep on building the transnational connections that animate  our own political platform. We see our struggle in connection with the insurrection against racial oppression and its structural link with exploitation that has shaken the United States for months. Even beyond the direct communication that links struggles in Amazon warehouses or Black Lives Matter demonstrations across the Atlantic, these movements are a further display of the transnational circulation of strikes and insubordination in our present times. The transnational social strike is essential because it tackles the sexist and racist conditions of production and social reproduction as part of a wider logistics of exploitation. The transnational social strike is as essential as ever.