Essential Struggles Against Patriarchal Violence. Report of the Second Public Assembly of E.A.S.T. 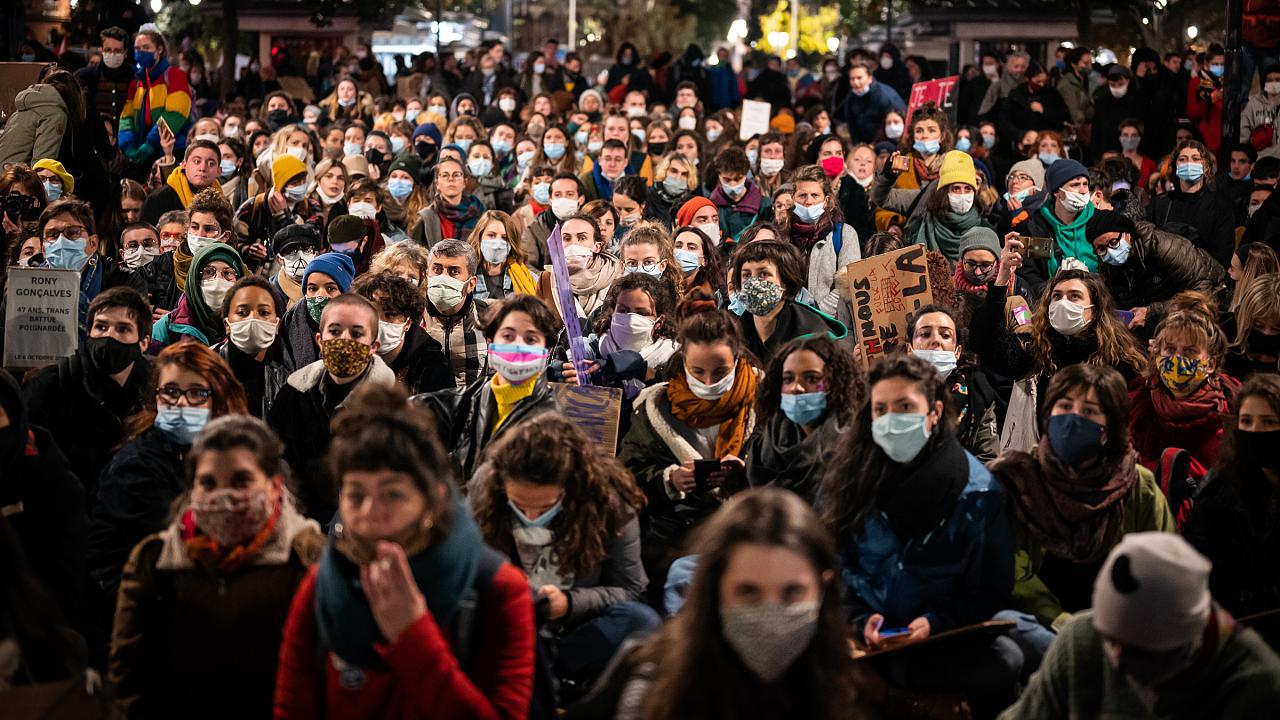 The network EAST (Essential Autonomous Struggles Transnational) had its second public assembly on November 29th, 2020, in connection to the November 25th demonstrations against patriarchal violence. The outcome of the assembly was the decision to publish a common manifesto of the essential strike towards the 8th of March 2021 and beyond, and to produce other moments of collective discussion on the transnational connection of our struggles and possible transnational claims.

Despite the current limitations to public gatherings, the 25th of November has been an important day of political actions across Europe and beyond. During the assembly, comrades from Italy, Turkey and France shared their accounts of organizing and participating in recent demonstrations. In Bologna (Italy), migrant women started a strike at Yoox, which is ongoing, in a major logistics hub, and they chose to launch it on November 25th precisely to contest the structural violence they experience as women, workers and migrants. The conditions for these migrant women are significantly difficult, as they experience sexist and racist threats in the workplace, where the bosses arbitrarily changed their shifts in order to push them to resign and to replace them with temporary workers. As working mothers, the changing shifts compromise their ability to care for their children at home and have a life outside of work and these workers are therefore striking against the company’s demand of the complete availability of their time. A shoutout against violence also resonated in many other countries on November 25th. The comrades from Turkey and France took to the streets in large numbers, daring to challenge the general restrictions, for the purpose to manifest that they will no longer accept the patriarchal violence which has clearly worsened during the pandemic. The state of poverty for refugee women, child abuse, and growing violence against women and LGBTQ community were just some of the themes of discussions in the Turkish platform “Women are Strong Together”, which organized a march to fight against the conservative policies of Erdogan’s regime. Despite the harsh repression towards women’s struggles this was a moment to reinforce that there is trust and confidence in the movement. Women have been the protagonists of migrants’ struggles in France, starting from the struggle of undocumented workers, who are not only compelled to accept whatever working condition, but also excluded, amid a deadly pandemic, from the access to healthcare and vital subsidies. So, in the last few months, they went on strike under the watchword “Regularization for all”: a national march which connected to the mobilizations organized by Transnational Migrants Coordination throughout the whole Europe, as well as in Turkey and in Morocco, and continue to plan more demonstrations on December 18th.

The point of the residence permit for migrant workers has been an important focus during the discussion, especially with women in the field of domestic labor. In Spain, Territorio Doméstico (a collective of migrant and undocumented women) is protesting because they are forced to work without protections, for prolonged working hours, and often delayed payments. Sudden layoffs are common when asking for an 8-hour workday, or to simply be allowed to have a short break. The claim of regularization of their work and documents for them as migrants is central. Simultaneously, the Transnational Migrant Coordination has been organizing from last May onwards assemblies gathering migrant workers across borders on the one hand, and on the other hand transnational mobilizations. The main claim coming out from these assemblies and mobilizations was precisely the one of an unlimited and unconditional European residence permit, in recognition of the blackmail placed on migrant workers, who are pushed to accept jobs with unacceptable conditions in order to have the right to live and stay in Europe.

The pandemic worsened this situation, putting migrant women in the forefront of multiple conflicts, which however also included non-migrant women and men performing essential labour, reinforcing current hierarchies in the society. The struggle in Georgia as in many other countries in Eastern Europe has been on the healthcare front. In Georgia, right now there is a shortage of healthcare workers: many Georgian nurses are recruited in Germany, and, along with the privatization of hospitals which are now owned by banks for the 90%, the situation is dire. Currently there are a total of 17,000 nurses, 9,000 of which have been tested positive for Covid-19, and they all earn 90 euros a month. Many doctors, nurses, cleaners, are dying, and the 95% of them are women workers. Beyond the healthcare sector, even working from home together with the increasing domestic work has led to a more vulnerable situation, with abusive partners.

Together with the Polish comrades of Workers’ Initiative, the Polish women’s strike was discussed. Since October, when constitutional tribunal ruled for an even more restricted abortion policy, protests have spread, large and wide, all around the country. There is a social and economic character to the struggle now, as this restriction directly or indirectly affects working women. Thanks to this struggle, the class dimension is now clear for all women, not just when it affects women that do not have the money to travel to another country to get an abortion. The further limitation to abortion clearly appeared as an imposition to stick to the role of serfs of this society, subordinate at home and exploited outside, mothers by destiny and driven to taking care by nature. The women’s strike named the social direction of the strike. Police violence on the streets during the protests led to slogans stating that more money and funding should go towards women’s needs, instead of police. The limbo situation of the hospitals currently play on the fact that the decision is still not official, since it was passed but not published. Even that alone is already a small victory for the movement, which has no intentions of stopping there. Women’s strike association has produced a strike council, in connection to the workers’ movement, to produce demands: the main focus is to shorten the working time, and there is already a second proposal about temp agencies, junk contracts/zero-hour contracts. The issue of the extension of social benefits after the pandemic, shortening the retirement age for women, changing of minimum wage, communal flats all are topics of discussion brought up. Even though there is a restrictive strike law in Poland, the word “strike” has permeated into these protests and into the workplaces. Recently, three wildcat strikes at Amazon warehouses, as well as widespread Black Friday protests, were organized. There is now a possibility to discuss the strike. The strike becomes a weapon to express the refusal of different forms of violence, even when traditional forms of strike at the workplace are prohibited.

The watchword of the strike is circulating also in Belgium, where comrades at Ghent university are organizing a strike for March 8th with cleaners and cafeteria workers, using the support of the unions and calling also professors and teachers to join the struggle. Under the banner of the essential strike they are demanding the in-sourcing of workers to overcome divisions. Beyond wage, residence permit for migrants and shorter working hours, housing emerged as a terrain of conflict when the pandemic made homes not safe and not guaranteed for everyone, as in Romania. Reproductive work and housing are points for organizing around now, while many are forced to work from home, pushed back into often overcrowded houses to take care of children and old people in unsafe conditions.

These current struggles, strikes and marches have women at the forefront, and the question is how to politicize – starting from women’s specific conditions – the whole condition of being migrants, precarious, industrial workers, women and men and how to do it transnationally. In this discussion we are considering the interlocking conditions of exploitation, racism and violence, starting from the problem of social reproduction as reproduction of hierarchies in the society. Women are overexploited at work, with precarious working conditions, while the pandemic has worsened a situation that was already difficult. There is an increase in workload in the reproductive labor, the governments do not give benefits and rather are on attack against women (as in the abortion rights amendment in Poland and the threat of the Istanbul convention being eliminated in Turkey). An economic, racist and patriarchal violence that women are experiencing during the pandemic is clear and reveals the attempt to prevent women from choosing their destiny. They fear that women will refuse the work that is expected of them. How to be a threat, and increase this danger? Discussing the strike as an horizon and a process that is not limited to a single event is a way to confront these questions, and imagining together ways to go beyond not only the limitations on the right to strike, but also the fragmentation in the workplaces. The essential strike process is about understanding how patriarchal violence and racism interlock and affect women specifically and how this link changes all positions in society. The duty of subordination is a widespread communication to all women, as in the case of Polish women, who are forced to accept the destiny of being mother with no choice for abortion. The linked struggle for increasing wages is based on the free labor that women are doing. To fight against patriarchal violence in all its forms means to overturn the devaluation of women and migrants, and transform it into a force, which, through the essential strike, can impose our terms.

Higher and equal wages; unconditional residence permit and regularization for undocumented workers; domestic labour; shorter working hours; housing; connecting productive and reproductive labor: these are the terrains of struggle which the essential strike should address on the transnational level. We want to open a space for more people to join and have their voices heard. To overcome the fragmentations on national and local levels and in the workplace, our differences must be heard in the struggles. The global women’s strike allowed for raising a multitude of voices. In order to organize together with the horizon of the essential strike in mind, we will discuss common transnational claims and write a manifesto of the essential strike for the 8th of March and beyond. A manifesto to build the process of the strike, to say what we want during and after this pandemic, to affirm that we cannot accept the current conditions and that we want to overturn them altogether.