(Post?)pandemic Struggles in Social Reproduction. Responses by Migrants and Women in Central/Eastern Europe and Beyond 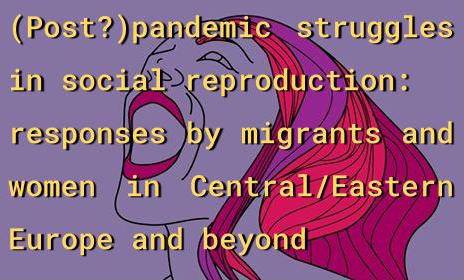 We publish here the presentation of the online webinar coordinated by LevFem and Transnational Social Strike Platform that will take place on June 28th, 6pm (CEST). The webinar builds on previous discussions with workers and activists from the region held within an emerging initiative to connect different struggles in the terrains of social reproduction, labor and migration in Central Eastern Europe and beyond. The webinar will be live streamed on the TSS facebook page.

Recognizing that European initiatives can not be built without looking at what happens in Eastern and central Europe, the collective LevFem and the Transnational Social Strike Platform have initiated a political process – that will continue in the next months – involving organizations and collectives from Central/Eastern Europe and well beyond. With this webinar, we want to build on the exchanges we already had with workers and activists by inviting all to a public discussion focused on recent struggles on the terrains of social reproduction, labor and migration, that have been galvanized or intensified by Covid19 which linked neoliberal and authoritarian developments and responses. During the webinar we would like to take these discussions further by exploring the following questions: How to interconnect these moments of protest and struggle in a powerful transnational initiative? How to foster transnational political communication in Central and Eastern Europe and beyond? How to be up to the challenge, initiated by the global feminist strike movement, of overturning neoliberal social reproduction?

The new normal is sneaking into the post-pandemic phase of reconstruction in Europe. While in this part of the world the worst seems to be over, the pandemic is claiming many other victims in new hotbeds across the world. Everywhere the pandemic also meant an intensification of processes of exploitation, patriarchal and domestic violence, and institutional racism. Governments’ responses to the Covid19 crisis were the imposition of longer and tougher working hours for nurses, sanitation, healthcare, and care workers, who are predominantly women and/or migrants. In Eastern and Central Europe the emergency accelerated authoritarian and racist tendencies, worsening labor, working, and housing conditions, and the oppression of women, queer subjectivities, and Roma people. The pandemic made clear what is by now a structural feature of Europe, which is too often forgotten by social movements: the extent to which the whole of Europe heavily depends on the labor of Eastern migrant workers, as well as the extent to which the entire EU project is based on the government of mobility of labor from within and outside its borders. This shows the necessity to bridge the divide between East and West when imagining a powerful transnational initiative – a necessity which is at the core of the project of the Transnational Social Strike platform.

As the essential character of migrant labor clearly surfaced, social reproduction emerged as a field of tension and struggle where essential workers spoke out against being the ones paying the highest price of the pandemic crisis. While it was taken for granted that women are those naturally destined to take care of the children, the sick and the households during the lockdown, women contested their identification with care work. Women took to the streets in Poland against new restrictions on the freedom of abortion, while in Turkey they protested against rape-marriage law which the government is trying to pass hastily and everywhere women are struggling every day amid the pandemic against increasing male violence. Nurses, care workers, women, migrants, but also agricultural laborers, logistics and factory workers went on strike and protested. Eastern-European care workers self-organized against their invisibility and exploitation. In Bulgaria, the struggle of the nurses against low pay and dismal working conditions, which preceded the Covid-19 crisis, was brought to the forefront during the pandemic, with many protesting the lack of provision of PPE and the increased workloads yet decrease in pay. The rage for so many avoidable deaths, the contestation of the exacerbation of racist violence kindled a powerful global reaction in solidarity with Black Lives Matter and the uprising in the US, while migrants are taking to the streets refusing to be considered only when their labor is needed and claiming an unconditional and unlimited European residence permit.