#Globalwomenstrike / We Strike So That They Stop Killing Us. Voices from Argentina 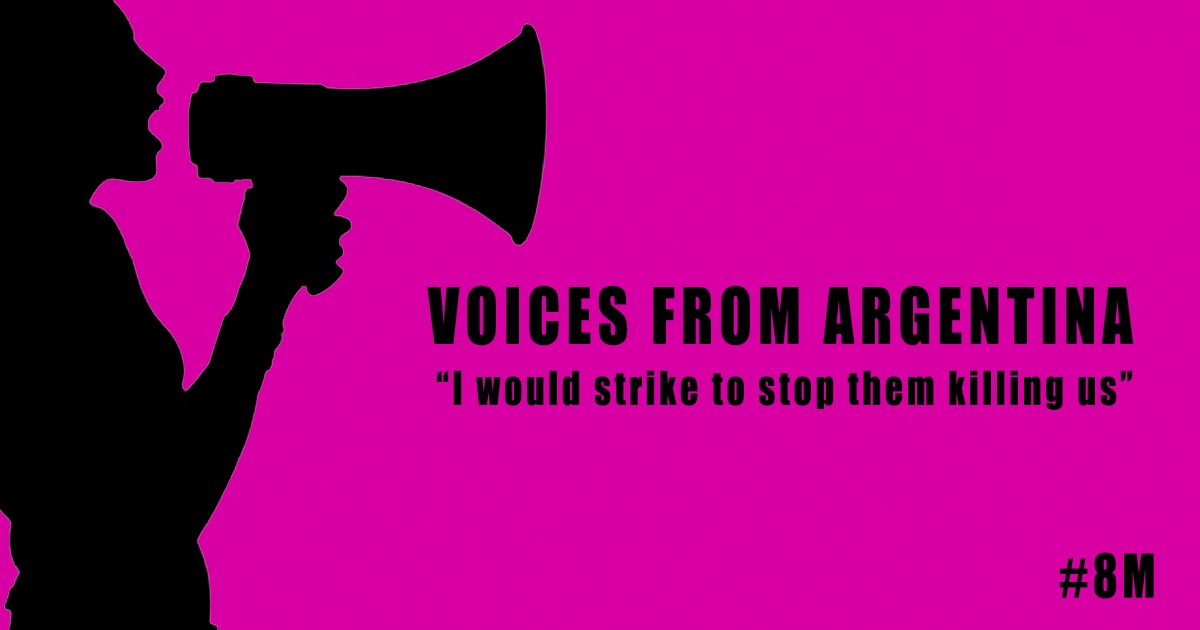 This year again on the 8th of March millions of women have taken to the streets all over the world, from Chile to Turkey, defying dictatorship, neoliberal patriarchy and racism, and today again, 9th of March, there will be strikes and demonstrations. Today’s interview is the last of the series toward the 8th and 9th of March and presents some voices from Argentina, which has been the engine of the process of the global women’s strike in these years. We interviewed the comrades of the women’s refuge Casa Popular Valeria, who work in the informal economy and denounce male violence which rests on class and racist hierarchies and continues to kill, rape and oppress. To build collective power against violence is still the bet of the global feminist strike.

The answers were elaborated collectively and transcribed by Alex Herrera and Hosanna Cazola.

CPV: The comrades who militate and work at “Casa Popular Valeria” are workers of the popular economy. We are women and dissidents who organize ourselves in our tasks of care, which is typical of our comrades, to politically vindicate the role we play every day. So, many times we don’t want to stop taking care of our children to go out to a formal job or to our parents, grandparents, etc. We want this work to be recognized and protected by our organization and to build a political claim on our right to be valued for the task assigned to us by our family or society. Many times we feel that, as a popular sector, a liberation is demanded from us that does not necessarily have to do with our immediate desires or with the collective construction of our subjectivity around work, motherhood, and the organization of the home. Although in recent years we have regressed in material terms, we have been able to gain symbolic and political space. We take the public space as popular feminism, a feminism that respects the processes of all our companions and refuses to leave any of them behind.

TSS: Does being a woman /and migrant / and indigenous affect how you are treated at work? How?
CPV: The ethnic question as the one of class intensifies the inequalities and exposes us to extremely vulnerable and violent circumstances. In our city Olavarria, the collective of women and dissidents of popular sectors, are geographically excluded from all the state circuits of containment, accompaniment and access to rights. There is an invisibility of the general situations we are going through, and the lack of perspective on rights and gender revictimizes us in the face of each organized claim and leaves us individually helpless. The possibility of having access to a decent job is terribly distant, since our material conditions, training and physical identity are not in line with the demands of the labour market. We have decided to be part of what we call “the other economy”. A social, solidarity and popular economy that does not require us to pre-format our lives in order to include ourselves. That values work integrally and where we can rethink our consumption and supply needs.

CPV: Women and sexual dissidents were historically subjected to all kinds of violence by the hetero-patriarchal system, with hegemonic masculinities being the ones who channelled such violence. We understand that in the construction of these masculinities there are certain common practices that allow us to belong or be part of a traditional cultural system based on being male. One of the most popular practices is the constant demonstration of power, of superiority. Violence is an extreme form of exercising power, women stop being free subjects, to become objects of use and abuse. Definitely most of the women and dissidents live situations of daily harassment, without naturalizing it, we assume that it is something that we are going to find in some moment of the day, of the week or of the month and it can happen in any area of our lives. From our space we work daily together with our colleagues, reflecting and identifying all the violence we go through because we are women of the popular classes, collectively we build tools that contemplate our realities and allow us to generate individual and collective methods of care in the face of male violence.

CPV: Since before the creation of our space, we work with the accompaniment of families and women in vulnerable situations, and even more with their material assistance. From the inauguration of “Casa Valeria” we were able to focus our work and give it the political meaning it has today. In the close accompaniment of the victims of violence it is that we find the failure to what we call the ‘circuit of the denunciation’. The systematization of this task gave us the input to generate a request to the provincial executive. As it had no echo, it was transformed into an ordinance that was presented in the deliberative council, giving rise to the Declaration of the Emergency in Gender Violence. The obstacle and limit is found when, in spite of the recognition of the problem and the proposal made by the organizations, the state does not act with concrete measures. Our organisation is worn out by the constant demands added to the attention to the urgency. Because definitely, if the situation is not even more heartbreaking, it is thanks to the feminist organizations that we built on the territory.

CPV: We are aware of the women’s movement worldwide and consider the paradigm we propose to be extremely hopeful. Although we insist on the concept of thinking like feminists, because we cannot stop making visible all the issues that cross us, the main one is the condition of women or dissidents, but clearly there are other conditions that violate us. In our case it is the class and our identity in front of it. We will never deny our general condition, because it is what builds us up. And if the system is not prepared to include us, then we build mechanisms of survival and organize ourselves to demand from each state the reparation we need.

CPV: We would strike against everything that oppresses us and tries to “normalize” us. We would do it to demand an immediate halt to the violence they exert on us, so that they stop killing us. The movement of women and dissidents came to shake everything up, we see old structures falling apart and we are not going to take a step back, together and organized, we come to change everything.

CPV: We would tell them to get organized, to remember. That initially they should link up by creating bonds of solidarity and empathy, to later generate power in the face of the inequalities that cross them and create everything they need. Pregnant bodies have been given the task of procreation, but we have shown that we do not only create life, we create meaning in the face of horror and we are giving birth to a new humanity.