#Globalwomensstrike / The Feminist Strike Makes Visible the Violence we Suffer as Women. Voices from Uruguay 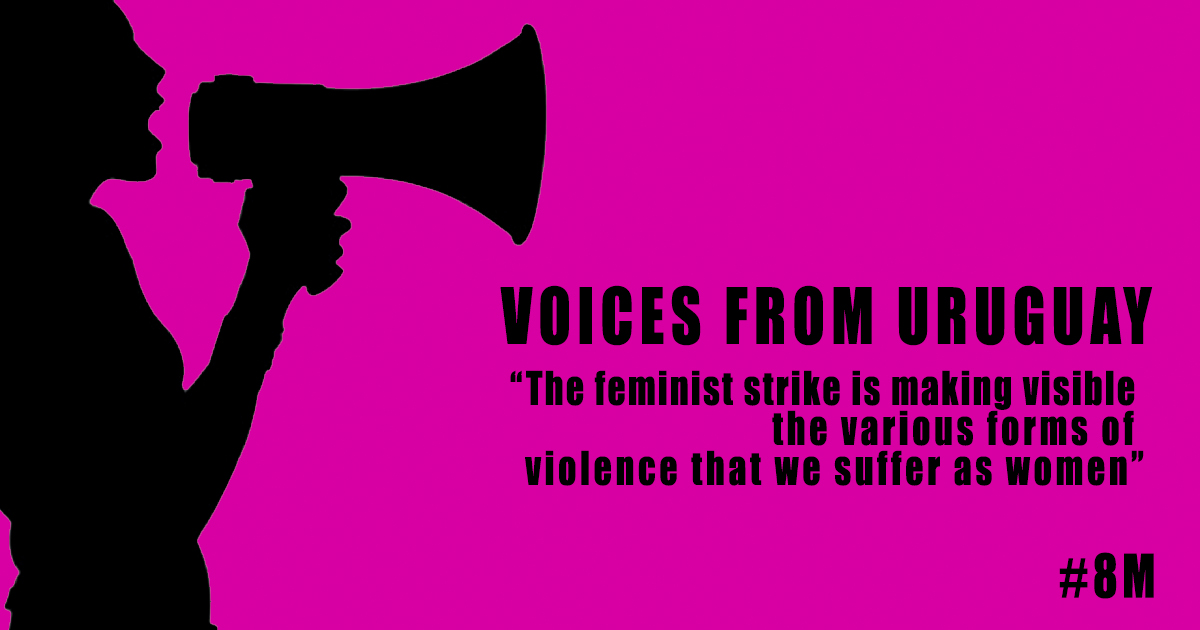 Today March 8th, the global women strike day, we publish an interview to Carolina Viera, a Uruguayan teacher of secondary school and activist of the feminist collectives Minervas and Profes Feministas. The dialogue shows the state of public education in Uruguay, where schools are wanting structures and instruments for teachers who in turn are compelled to work exhaustingly to earn a living. In addition, many male teachers abuse or harass female students. The struggle of Carolina and her comrades highlights the structural and pervasive character of violence which only through collective political initiative can be defeated. This struggle becomes even more relevant after the election of Luís Lacalle Pou (National Party) who has already started a war against abortion, the feminist movement and public education.

Carolina Viera: I’m a secondary school math teacher. I work with students between 11 and 15 years old. Although the working conditions are not the same every year, because I do not always teach at the same institutions, they have not changed so much since I started teaching in 2016. I have to buy almost all the materials I need to do my job: markers, ink, sheets for printing, among other teaching materials. In addition, most of the classrooms in the different institutions do not have heating or cooling, so it becomes very difficult to teach and to learn when there are extreme temperatures. Regarding the salary, I have to work many more hours than recommended (what is called “teaching unit”), as the majority of teachers do, because the salary is insufficient.

CV: As teaching is a profession in which most of us are women, I don’t feel to be treated differently for my gender.

CV: I have suffered frequent street harassment, especially when I was younger, although I have never experienced a harassment situation in which my life or body were in danger. I have not experienced sexual harassment at work, but my students have come to me and told me that they have been harassed by their teachers. In these situations, along with other colleagues, we have accompanied the students in their process of reporting what happened to the corresponding authorities.

CV: Yes, since I started working as a teacher, me and my colleagues have been taking action together with the union’s comrades. The strikes and mobilizations were based on the rejection of various educational policies that affect both our working conditions and the students. We struggle for a larger budget for education and a better resources allocation, which will allow the improvement of Public Education. Within our Secondary Education teachers’ union, ADES Montevideo, we formed the ADES Montevideo Women’s Commission, which arose from the need to struggle starting from our specific needs as women. One result of the Commission was that the General Assembly voted a strike only for women on March 8, 2019. Although there was resistance and rejection from several colleagues in the union (mainly because they wanted “everyone” to stop and not just the women), the motion was approved.

CV: Yes, I am part of two feminist groups: Minervas and Profes Feministas (this feminist teachers’ group is based on the ADES Montevideo Women’s Commission). From there we militate for the feminist strike, against patriarchal violence.

CV: The 8M feminist strike seems to me to be a very powerful means of struggle and one that is making visible the various forms of violence that we suffer as women. More and more women are organizing and mobilizing in this sense. For this 8M, I believe that there will be many of us stopping our activities and going out into the streets. I will also strike against those policies that go against the public education. In Uruguay, we will have from this year a right-wing government, with very conservative logics, which has already declared that in terms of educational policies, its management will be in favor of private education. It will be up to us teachers to fight against this, either with a strike or with some other measures of struggle.

CV: I would tell them that what has strengthened me the most and made me think that things can be different were my feminist companions. Knowing that I can tell my experiences and have their ears, their hugs, their affection; the power we achieved together has significantly improved my life in general, and specifically my work. I would also say that we should always believe the students who report situations of harassment or abuse; it is essential that they know that they can count on us. One of the most important struggles we have as teachers is against sexual harassers in educational institutions.