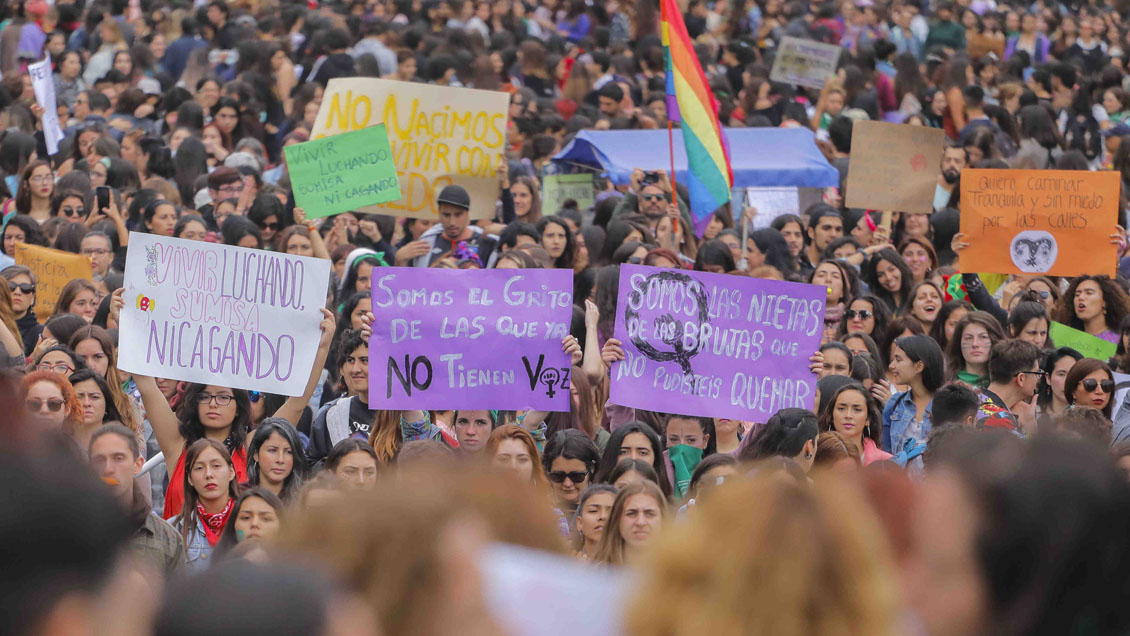 Dear sister comrades from all over the world,

The undersigned collectives met to add their voices to the multiple calls coming from working class, indigenous, Black and peasant women, as well as students, lesbians, trans and travestis to mobilize for action and revolt on March 8th and 9th. We call for building common strategies to keep feeding the feminist rebellion which is spreading all over the world against domination, exploitation, occupation, and dispossession.

Today we find ourselves at an historic global crossroads, especially in Latin America. We are facing a crisis which is giving way to increasing polarized paths. One is marked by the threat of the far rights and neo-fascist groups, whose plan is to become the new managers of neoliberalism which is showing its most deadly face. This far-right is fueling hatred against racialized communities, women, lesbian, and trans communities, and it aims at strengthening the racism sown in the times of colonialism and patriarchy. Yet, at this crossroads, we could choose another path. A path built by our feminist, plurinational, transnational and antiracist power. Even though we come from very different social and political backgrounds, we are united in this struggle against violence, and by our determination to end it, by putting forward an updated political program for the exploited to rebuild a new shared and transversal struggle. We have today the possibility to build anew our own program and strength, to discover new tools of struggle loaded with meaning, and to rescue from the politics of oblivion the fruits of past historical experiences. The experience that has united us and continues to do so is already a global one: the destabilizing strength of our mobilization against patriarchal violence has crossed all borders and has united us in a great tide.

From this crossroads we call for building a broad process of mobilization that would disrupt all aspects of life. We call for the revolt of our bodies and land against the increased violence exercised on them. We call to rebel against sexual violence which is political violence. To rebel against militarization and the systematic violation of human rights and women’s freedoms as the women in the Middle East and Kurdistan are doing, following the historic resistance in Rojava. We call ourselves to rise against the attacks to the right to choose over our bodies and our lives, and for the right to abortion. To rise in response to the global crisis of childcare, the increases in debt and incarceration which are direct forms of dispossession, precarization, and negation of life. At this moment, we want to reach and support the indigenous women in Bolivia and the victims of the ongoing racist and patriarchal coup. To rebel against the racist and institutional violence in order to be free to move and stay wherever we like. This is a call to revolt and affirm our power to say no, to say enough, and to show the way forward, synchronized in the same dance, as we have been – a dance that is a condemnation which weaves together our multiple stories and scars, pointing to those who are truly responsible for the management of misery.

We call to claim back our land from the extractivism that animates the ongoing processes of colonization. Extractivism is expanding worldwide and is strengthened by the criminal and invisible alliances of capital and patriarchy. Its main targets are the freedoms and rights of women and other dissident communities, and the experiences of communal life that arise in our territories.

We call collectively overturn the many and interrelated structures that make up colonial patriarchy. Our struggle needs to embrace the vital responsibility of fighting racism, for it is one of the key roots of modern capitalism. Five hundred years after the beginning of the invasion and exploitation of Abya Yala [America], as well as Africa and Asia this system continues to exclude racialized bodies and migrant communities from even minimal access to a dignified existence. Women and Black bodies were born in resistance and were never the mere spectators to the radical changes we need to live the lives we desire. Our current moment will not be an exception, we need to blacken our feminism, as well as acknowledge the existence and harm of racism. We need to diversify our feminism, and give visibility to other multiple oppressions and to the intersections they produce: Black-, indigenous-, women-, gender and sexual dissidents, in order to achieve a sustainable historical reparation.

We recognize that patriarchal violence has different forms and intensities. We also acknowledge that our capacity to defy and reject it will be greater the more global our uprising. We know that the rebellions we are partaking in implicate the hope of all peoples in the world, for we are showing again, from the South, that revolts continue to exist, and that they can shake the ground of the structures that oppress us, that they can lead to the collapse of dominant narratives and open the way to new ones. These rebellions are putting at the forefront those who have always been pushed to the background: women, gender/sexual dissidents, and oppressed peoples. They are actualizing the possibility for them to become the main actors of their own history. This is occurring in the context of an advance of the fascist, racist and fundamentalist far right, and it forces us to take the front line in the struggle, like the Kurdish women in Rojava have done.

Today more than ever, we are recuperating the front line of struggle, a front line that is woven from the multiple aspects that make up our life. The large movement we are a part of has different narratives and practices which cater to the needs of each one of our territories. We believe in the possibilities contained in a global and general feminist strike, taken as a collective process of articulation, politicization, and as a broad convergence and expansion that intervenes to disrupt an oppressive normality. A strike that aims at interrupting all types of labor, beyond their “productive” meaning, and forefront the types of labor that sustain life. We know that feminisms are rising up today as an alternative in productive cities and also in the rural areas with their plurality of knowledge, and this is why this March 8th call comes from all these diverse places.

This is a call to occupy every space, and especially those that have been historically denied to us. To take them and transform them, converging to build a life that overcomes the capitalist and patriarchal débâcle with which they seek to keep us subjugated. We have initiated an emancipatory process that has a transnational character, and this March 8th and 9th will be an important milestone. We also know that this will not be the only one: we will continue weaving and convening ourselves to build the life we desire and dream of.

We call ourselves to keep standing in rebellion, continuing and deepening the social explosion of peoples as well as our feminist and transfeminist struggle.

Up with those who struggle!