March 8th – The Weekly Striker n. 6: Striking against the Regime and for Women’s Freedom in Turkey 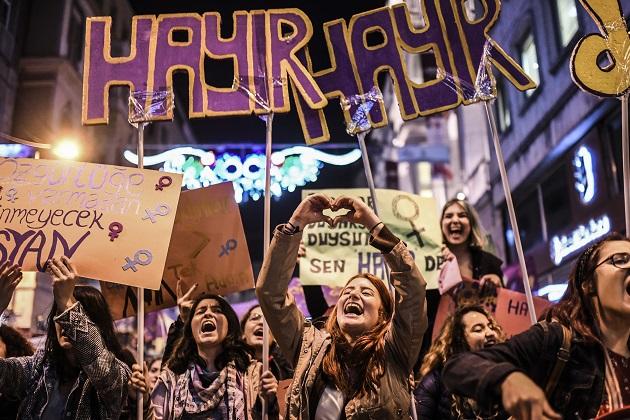 For the last issue of March 8th – The Weekly Striker we interviewed Seda Can from the Turkish organization Socialist Women’s Assembly. Seda Can tells us that the global wave of the feminist strike impacted Turkey with unexpected force. In January an assembly of 1000 women called for a strike “against the crisis of violence”. The Turkish government, together with the neoconservative and neoliberal ones all over the world, is afraid of women’s freedom: this is why repression, which in the last years has brutally hit the mass mobilizations on the 25th of November, cannot prevent women from speaking out collectively and using the strike as a weapon against the violence of Erdogan’s regime and patriarchal society. The process of mobilization led to the establishment of connections with ongoing strikes, such as the one of the women cosmetic workers of Flormar, while there is an attempt to enlarge the strike to all sectors of women’s work, including the domestic one. In order for the strike to succeed, it is fundamental to “grow our anger together” not only in Turkey but everywhere in the world, on the 8th of March and beyond that date: the feminist strike continues all year.

Transnational Social Strike Platform: This is the first time that you are organizing a women’s strike on the 8th of March, even though there have always been massive demonstrations on that day at least in the past couple of years. How has the process started? Which role have the global feminist mobilizations played?

Seda Can: During the last years, the women’s movement in Turkey has followed with great interest the process of an international women’s strike which started in Argentina and Poland and spread over dozens of countries in the world. The international mobilization inspired women in Turkey and Northern Kurdistan and the idea to organize a women’s strike was expressed during the country wide women’s meeting in January 5-6 in Istanbul. Over 1000 women answered the call of 165 women and LGBTI+ organizations under the slogan “Women are strong together” and came together to discuss the ongoing period, the experience of women’s struggle and the chance to take common actions. In several discussions and working groups, the 8th March strike’s debate excited many women’s organizations. The growth of women’s anger and rebellion against the male dominant system and his various forms of government gives strength to women who have raised the struggle for women’s freedom in individual countries. For this reason, we believe that it is important to give voice to the female comrades in each country and grow our anger together. This year a massive demonstration will take place in Turkey on the 8th of March. Besides, preparations for a women’s strike are taking place in several cities. Assemblies in many cities came together to discuss the possibilities of a women’s strike and how to start the mobilization.

TSS: How do you conceive the feminist strike? Which are your claims and which is the composition? How are you organized at the national level?

The mobilization for the 8th of March strike is going to be an ongoing work and its preparation will endure the whole year. So, while organizing this year’s strike, we are also getting ready for the next year’s one. We started our work with high claims. We want to start a wave of women’s strikes which will take the wave of international women’s struggles to the streets of Turkey: we want the world to stand still. We believe that with the women’s strike, as a vanguard action, a wave of big women’s struggles will be initiated. The strike will affect all aspect of women’s life, as women’s labour as a whole, from production to households, will be on the agenda of the strike. Organizing women’s solidarity, every demand of women’s freedom will be on the agenda and with the strike the potential for a united women’s movement will be realized. We are getting prepared for the strike with widespread political agitations, but the strike isn’t reducible to this. In practice, we will organize all women to express their reaction by not cleaning at home, not going to work, leaving work for a certain period of time, stopping for 5 minutes on the street and so on. Our slogans are “We are in rebellion against the crisis of violence. On March 8, we are on strike,” “life stop if you want! Stop life on March 8th!” and we will wear colourful ribbons on the streets.

TSS: Which kind of attacks is the conservative, authoritarian and fundamentalist government of Erdogan waging against women? Will the 8th of March be a chance to protest against it?

The patriarchal, fascist regime of Erdogan attacks the life and the freedom of women with every means as long as it tries to break the will of all people looking for their freedom. Last year, during the 25th of November’s night march, the police attacked women’s manifestation. The power of women in the struggle for freedom scares the AKP government in Turkey, as well as the governments of all over the world. That is why many thousands of political activists, especially political women representatives, are in prison now. But the resistance goes on. We believe that the women’s strike as a political tool has to combine with all demands for political freedom. So today, as an example of this resistance in prison, hundreds of prisoners are on hunger-strike against colonialist policies and isolation terror which hit Kurdish people’s leader Abdullah Öcalan; this strike was initiated by deputy Leyla Gueven and our strike can contribute to this struggle. The 8th of March’s strike has to unite all demands of women. So, in general the target of our action is the patriarchal fascist and political Islamist state, which reproduces violence against women every day. We can say that women are one of the most important political subjects against fascism in Turkey. It is the only movement which forced the state to take a step back during a time of massive state repression and state of emergencies in which Erdogan ruled by decrees. In 2016 AKP tried to legalize child abortion and child marriage through a new law which gave amnesty to those men who marry the child they abused. The resistance of women managed to prevent this law to be enforced. This gave an important moral power for all the people in Turkey.  Now again, AKP is in the process of amendment to forgive child abusers. Policies on women’s lives and rights continue, but women do not give up against all these attacks. Leaning on the past experiences, we say that women will be the most dynamic and powerful force for equality and freedom.

TSS: How does women’s strike connect with other struggles, such as the strike at Yves Rocher, which are already taking place?

It is very important to connect women‘s strike with ongoing workers’ strikes. Women‘s strike mobilization in Istanbul started with a visit to the Flormar strikers to share women‘s solidarity. We invited the cosmetic production’s women workers of Flormar, who elaborated the motto “resistance makes you beautiful, not cosmetics!”, to organize specific actions on the 8th of March. We also think that women’s strike has to connect with the ongoing struggles in Turkey, such as municipal elections in March, the consequences of economic crisis and others. We will support and build connections with many kinds of strikes and actions in this period. Women have the claim to be a vanguard force in all social struggles.