March 8th – The Weekly Striker n. 5: France on Strike against Exploitation, Precarity and Violence against Women 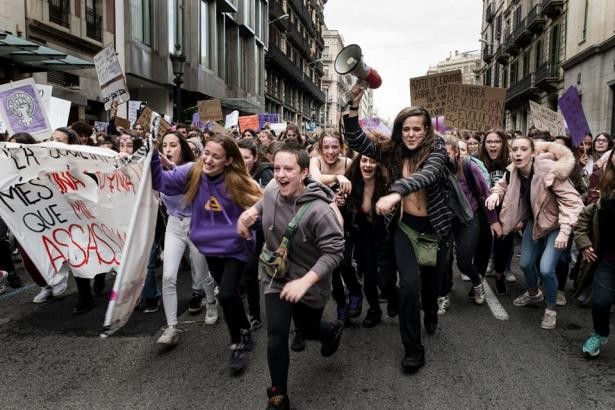 For the 5th issue of March 8th – The Weekly Striker, Transnational Social Strike Platform interviews to Cécile Gondard Lalanne, Murielle Guilbert and Corinne Melis of the French trade union Solidaires. The interviews focuses on the preparations for the feminist strike of March 8th. The success of the big demonstration against violence against women on the 24th of November 2018, with 60.000 people taking to the streets, was a strong message of protest against a multifaceted oppression: inequality in working and wage conditions goes hand in hand with brutal sexual violence. This year the watchword of the feminist strike has started to make its way through the hesitancy of some major trade unions, which consider it potentially separatist. This year March 8th is not going to be simply a ritual, but something new. Moreover the interview deals with the connection of the feminist strike in France with the global women movement and with the yellow vest’ movement.

Transnational Social Strike Platform: How is the mobilization for the March 8th strike going? Are there any public meetings on the women’s strike? If so, what is their composition? What are the main topics in question?

In France the success of the mobilization for the elimination of violence against women on 24th of November 2018 (60,000 people took to the streets!) gave a powerful boost to this 8th of March. Also, Solidaires has been shouting the slogan of a women’s strike on March 8th for several years and the idea of strike is spreading, whether it is called “feminist” or “women’s” strike.

Whereas last year, after the #MeToo movement, the theme of violence against women was, quite naturally, at the core of March 8th, this year’s joint call reminds us that we represent the 52% of the population, and that without us the world cannot function! Our aim is to push forward the issue of women’s work, paid work or “invisible” work such as domestic work and care work. Specific emphasis is placed on inequalities at work (salaries, careers, involuntary part-time work, job insecurity, pensions’ discrimination), gender-based and sexual violence at work, and financial and social insecurity, which affects especially women…

TSS: Is there any national coordination for the 8M strike?

For several years now, there has been a national coordination that brings together trade unions, feminist organizations and associations for the March 8th mobilizations. Every year a joint text on March 8th is published, and this year we were able to include a call for a feminist strike in it! Solidaires proposed the “women’s strike” method within the CNDF (National Collective for Women’s Rights, which brings together many feminist associations) since 2014. With the political slogan of the “women’s strike” we wanted to boost the mobilization of March 8th, to go beyond the day of “Women” and its commercial universe, and to recall its dimension of struggle against patriarchy and capitalism.  In 2012 the women in Toulouse had brought women’s strike back in the agenda. Since then, the idea of a women’s strike, or a feminist strike, has made its way. This has been a step forward given that some unions did not previously want to use the term “women’s strike” (seen as dividing the working class, or excluding men etc.). A dedicated website 8Mars15h40.fr also relays the mobilization. The CGT and the FSU are active parts in this process.

TSS: To what extent are unions supporting the strike? What is their relationship with feminist collectives dealing with the issue of strike?

As mentioned, the idea of a women’s or feminist strike has been promoted in these years by feminist trade unionists. This does not mean that the trade unions’ community as a whole agrees with! Concerning Solidaires, a notice period and a call for strike will cover employees in the service and the private sector. As Solidaires is a federation of trade unions, each union will decide on the relay of the call for a national strike. Our “local Solidaires”, based in the regions, work with feminist associations in the field. For the moment our aim is not to achieve high numbers of people on strike, but to initiate debates, actions, demonstrations for real equality between women and men. The CGT (in particular with the mobilisations of kindergarten workers), and the FSU are also involved.

TSS: How are you dealing with the transnational dimension of the women’s strike?

The international dimension is highly inspiring! The dynamism of international feminist struggles in Argentina, Brazil, India and many other countries shows that women know how to mobilize and that they will fight, whatever happens, for their rights and emancipation.

Solidaires keeps connections, through its international trade union network and Alter Summit, with the Spanish CGT and comrades in Italy and is part of the Transnational Social Strike Platform. This allowed us to invite foreign comrades to the preparatory sessions on March 8th in Solidaires this year, from Italy, Argentina and Messico. We relay calls and demands from different networks (Ni una menos, for example) and collectives of Zapatistas, Brazilian women, etc., towards March 8th. For our special flag “March 8th“, we have used the picture of vagina-shaped hands that South American and Spanish activists have taken back in recent years!

TSS: How is the process of 8M connected with the gilet jaunes mobilization?

Where possible, links are made between yellow vests’ women who denounce their situation of precarity, the fact that they struggle to make it to the next pay-check, and the misery of their pensions. There are many of them on the roundabouts blocked by the yellow vests.

Those with feminist claims are gradually joining the initiatives of 8th of March, and in Paris on that day, after a rally at 15:40 (the time when women stop to be paid, with reference go gender pay inequalities), a general assembly will be held to establish new connections and organize a follow-up moment, notably on the 9th of March (one of the Saturdays of the yellow vests’ mobilization).