The Acrobatics of the Feminist Strike. Male violence and Struggles for the Wage at McDonald’s 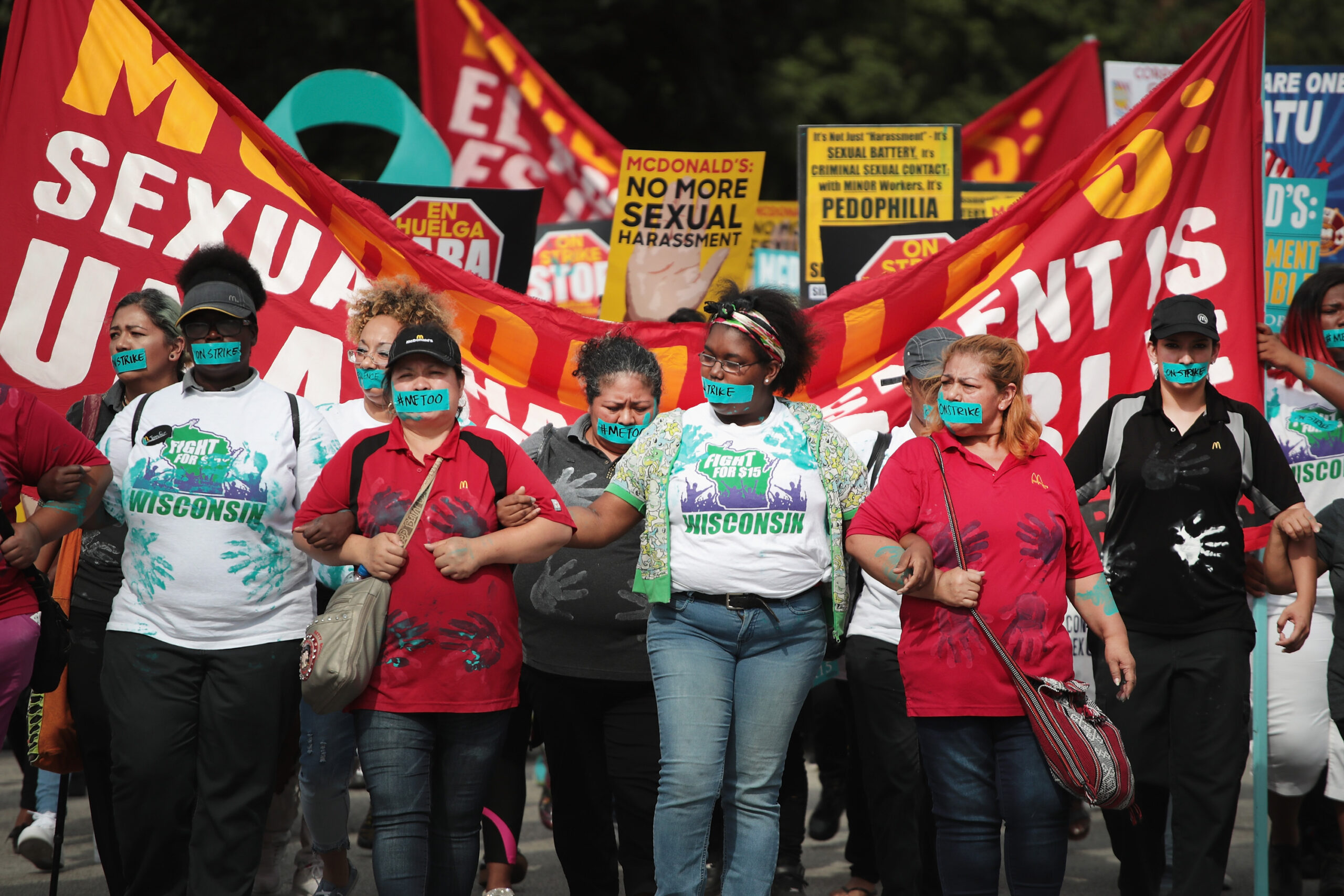 On Tuesday September 18th McDonald’s women workers realized the first strike against male violence and harassments in the workplaces organized against a multinational corporation in the US. Several women – many of which were Afro-Americans, Asiatic, Latinas, migrants and non-migrants – took part in the pickets and marches in Chicago, Durham, Kansas City, Los Angeles, Miami, Milwaukee, New Orleans, Orlando, San Francisco and St. Louis shouting the slogan: «I am not on the menu, hands off my thighs»! After dozens of allegations of violence were simply dropped by the management in the all too well-known sleazy ways – «you were consenting», «don’t cry like a little girl», «you will never win this» – these women broke the impotence of their isolation and spoke up together. Echoing a global outcry, the refusal of male violence has entered the workplaces through the strike and has given an unexpected push to the daily struggle of workers against exploitation, by turning it into a direct attack against patriarchal violence.

The watchword of the feminist strike has crisscrossed the US on January 20th 2017, right before the massive Women’s March contesting the inauguration of Donald Trump’s presidency, and on March 8th 2017 and 2018, when a «feminism of the 99%» has been set in motion responding to the call for a global women’s strike. The McDonald’s workers’ struggle cannot be separated from this process and from the great circulation of the hashtag #metoo, which bestowed an unprecedented visibility to women’s protests against male violence and harassments in the workplaces. As a matter of fact, #MetooMcDonalds is the hashtag chosen by the striking workers to show the connection of their struggle with a global movement. It is clear, though, that a huge gulf lies between Hollywood red carpets – from where the #metoo has risen to prominence on a planetary scale – and McDonald’s counters. No matter how heroic, the daily struggle to gain a wage does not open the doors to fame. The reports of recurring and often explicitly racist violence by colleagues and heads of staff in the fast-food restaurant colossus did not reach the pages of the big newspapers before the strike. Instead, the responses to the allegations have been all kind of retaliations, from verbal insults to the shortening of the workday to lay-offs. In front of this situation, the call for a strike has made the difference and allowed to bridge that gulf, overthrowing power relations. The abuses have not been simply opposed by an individual allegation, but rather through a collective response composed by thousands voices that have been able to shout: «we break the silence, we make history»! In doing this the workers on strike took advantage of the support of the “Fight for 15$” movement and of the Time’s Up foundation, born after the #metoo campaign to support precarious women in denouncing violence without risking to be further attacked and impoverished. By striking, the McDonald’s workers have clearly shown that they do not want to be poor, weak and vulnerable anymore, and that they are able to exercise a collective force against the sexual and social violence oppressing them.

McDonald’s headquarters have responded to this struggle in a disordered way.

After declaring that regulations and training courses against harassments are a constituent part of their corporate policies, they freed themselves of their responsibility by accusing instead the heads of the franchises who lead the shops. A ridiculous justification, considered that McDonald’s is one of the global leaders of the meticulous control of the workforce, the detailed calculation of the time of each break, the obsessive evaluation of each task, the constant monitoring of any operation to impose more and more intense work rhythms. Yet this justification cannot surprise: since decades, subcontracting allows to intensify exploitation and precarization of labor, by erasing any residual corporate responsibility towards the workers. Nonetheless, beyond formal responsibilities, the McDonald’s workers’ strike shows that – besides low wages, the chronometers, the CCTV cameras and the badges – harassments and sexual abuses are an ordinary tool to impose subordination and discipline to women in the workplace. Thus, to shout «we are not on the menu» does not mean simply to refuse to be usable objects of men’s sexual desire. It means, at the same time, to refuse the full availability to exploitation imposed also through harassments and violence. It is not by chance that, among the claims advanced by the striking workers, beside the request of establishing transparent procedures to pursue sexual abuses accusations and programming anti-violence training courses for managers and employees, there is the claim to 15$ wage for all McDonald’s employers.

This strike was organized autonomously and without the support of a union – since McDonald’s expressly prohibits its employees from becoming members and the wages for fast-food restaurant workers are too low to cover the unions’ membership fees. It was an act of courage against an environment hostile both to women and to the collective workers’ initiative. For this reason, just like the movement Fightfor15, the strike has shown all the limits of the trade unions, unwilling or incapable to recognize initiatives which are not included in the framework of institutional mediation. McDonald’s workers, in turn, declared that they will not stop until their claims are answered. 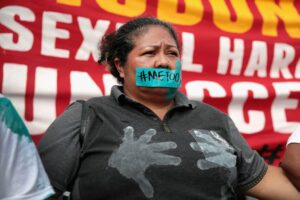 By making the strike a feminist political practice, McDonald’s women workers did «acrobatics» and made it clear that the struggle against exploitation cannot leave aside the one against male violence and against racism which is connected to it. In this way, they gave life to a political strike in a country where it is expressly forbidden by law. And they were not alone in this. On September 7th the women workers of more than 25 hotels in Chicago went on strike: these workers not only demanded medical insurance in case of dismissal and wage increases but denounced also the blameworthy indifference of hotels’ directors to the racist attacks and sexual harassments that are daily reported by them. In California on September 10th a janitors’ march left from San Francisco heading to Sacramento chanting: «Who owns my body? Me»! The aim of the march was to oppose the systematic practice of sexual violence during night-shifts, often perpetrated by the same chiefs who take advantage of the condition of isolation in which the cleaning is performed. It is not the first time that the janitors mobilize: since 2016 the singular allegations have become a collective movement of struggle, that to begin with had to fight against the opposition within the services trade union supporting the mobilization that was reluctant to combine the union struggle with the fight against male violence. In front of the protests the Californian administration did nothing but arrange training courses to prevent sexual violence that the janitors themselves are supposed to attend. 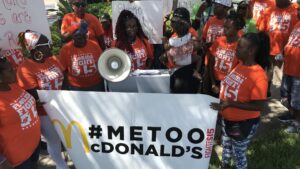 Now the Californian janitors reclaim loudly more effective measures and the end of silence: anti-violence courses for managers and employees and, above all, the construction of an autonomous workers’ network of support to break the isolation and make it possible for women workers to denounce and avoid violence even in a situation of constant blackmail. Things are quickly getting worse. Since most of the cleaners are migrants facing the threats of expulsion advanced by Trump’s administration, the already low number of reports of harassments and rapes on the workplace is drastically decreasing. Governmental racism translates into impunity for the rapists and into the power to entirely have at one’s disposal migrant women’s time and body. The message of the struggling janitors is clear: in order to fight violence it is not enough to arrange façade measures, like courses and procedures, but we need to conquer a collective sense of power.

While the administrations are more preoccupied to make women responsible than to persecute those who are guilty, and while the trade union is not always ready to grasp the groundbreaking political strength contained in the struggle against violence and to recognize it as a fundamental struggle against exploitation, McDonald’s strikers, Californian janitors and Chicago hotel women workers showed that the struggle against violence can enter the workplaces, becoming a tool to break the isolation imposed by precarity and create the conditions for a political communication which is able to overcome the borders between States and work-sectors. Until it allows contesting daily violence and harassments, until it lives in the fights against exploitation and racism, until it opposes social violence, the feminist strike is neither a ritual nor an awareness raising event but remains the occasion that everyone – not just women – should be able to take and fuel.