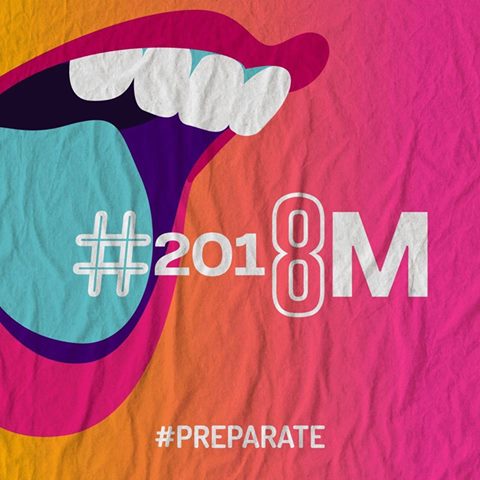 We publish a document from Ni Una Menos in Argentina towards the global women’s strike of next March 8th, setting the strike’s time. This does not only mean that it is the time to get organized and coordinate locally and transnationally towards the next global women’s strike. It is also a call to make of the strike our own time: not just the event of one day, but a process that challanges bit by bit the business as usual of social reproduction, overthrowing traditions, habits, isolation. “This is not the time for looking back, it is a time for insubordination”: as TSS we are in sync with the strike’s time, working to enhance as much as possible its transnational dimension. A journal with contributions from several places towards March 8th is upcoming. Stay tuned!

Today, January 8, we start the countdown to the 2018 International Women’s Strike. It is not a timeout, but a time for the accumulation of forces, of conversations, of encounters in order to create a new common cry. Together we produce the time of the strike, a time for women, a time for ourselves. It is a time that becomes dense and is multiplied because it is experienced in the encounter between bodies, and because it is a time when our dissidence, our territories, our experiences, and our knowledges count.

How do we build the time of the strike?

We gather with other women in every workplace, in our neighborhoods, in schools and universities, we gather with our friends, with organizations and unions, and women working in the informal economy. We multiply in meetings and produce a time of assembly starting now. Let’s produce a record of these meetings to recognize that this is a time of effervescence and of building a common web, so that what is said and developed in one place, encourages and inspires women in other places.

Why insist on the tool of the strike?

When we say, #WeStrike (#NosotrasParamos) we are inventing a we that houses all women, lesbians, transwomen, and all dissident identities in the cis-hetero-patriarchy. We call it an international strike because this tool allows us to make visible, denounce, and confront the violence against us, which is not reducible to a private or domestic issue, but is manifested as economic, social, and political violence, as forms of exploitation and dispossession that are growing daily (from layoffs to the militarization of territories, from neo-extractivist conflicts to the increase in food prices, from the criminalization of protest to the criminalization of immigration, etc.). With the international strike, we value other forms of life and we shout: if our bodies don’t count, produce without us. We know that if we stop working, we can stop the world. We did it in 2017. Our challenge is to strengthen and complexify this common measure, amplifying the internationalist wave in 2018.

How do we strike?

We multiply the images and meanings of the strike even when we are told we cannot go on strike or that we do not have the legitimacy to do so. We turn the question of the strike into a concrete and situated investigation. It is a challenge within unions and a call to ally with ongoing union struggles. But the strike also goes beyond the limits of waged labor and values care work and non-recognized and non-remunerated labor, the production of the common in cities and the countryside, in suburbs and indigenous territories. Let’s produce a record of what stops when we go on strike, of the multiple forms of labor that we stop doing and of the many gestures of suspension that the strike allows us to invent.

As the Zapatistas say in their invitation for this March 8th: rage, rebellion, and dignity feed forms of autonomy, insubordination, and uprising in different places in the world. We said that desire moves us: it is a desire to join together as sisters in the active search for dignity for all and for our territories, in defense of our lives and of Mother Earth against the advance of capitalist violence. We are moved by a desire for revolution.

How do we coordinate?

A proposal has been made in several Latin American and Caribbean encounters to unite on March 8th using the color purple, which identifies feminism, in order to make this wave visible and to use this common gesture to make the effective hours of the strike more powerful. We know that different processes of international coordination are already underway. Our challenge is to converge on the common measure of the strike, which is expanded through unexpected and unusual alliances. We build this coordination in social media networks and body to body, in assemblies and on the street. There are two months until March 8th. This is not a time for looking back, it is a time for insubordination.