Strikes at the Charité Hospital – Space of Healthcare or Profit Center? 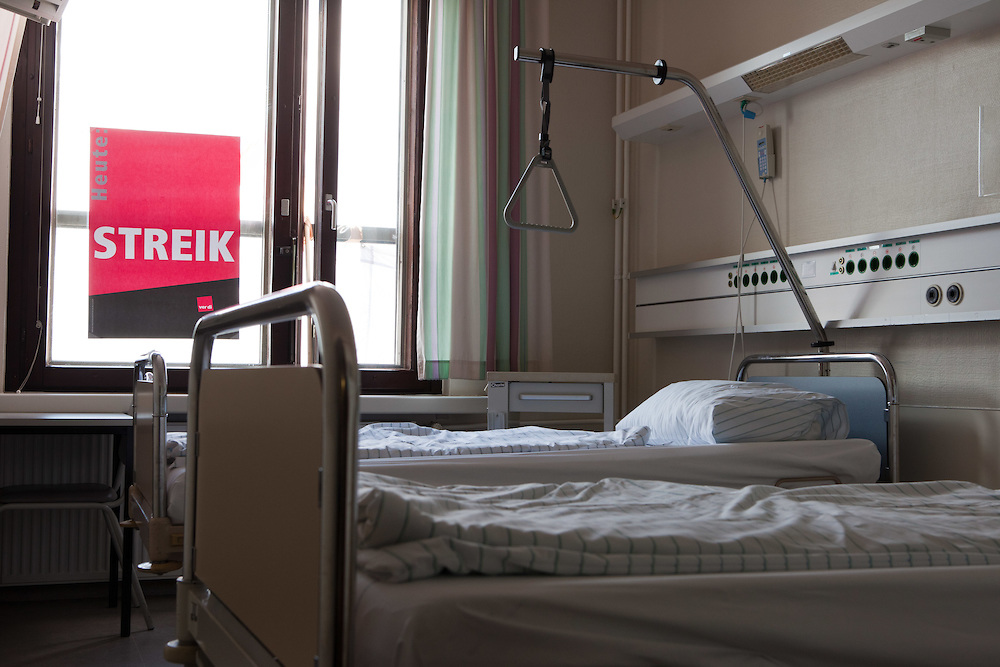 Self-organised nurses and care workers at Berlin Charitè Hospital have been fighting for two years against care reforms together with other workers and also involving patients and people throughout the city. By obtaining an agreement that fixes the minimum number of staff in the hospital, the struggle has been a victory against the encroaching profit-based health care market which combines cuts in public expenditure, a profit-oriented healthcare management and the employment of less workers with bigger workloads and smaller wages. To stress the importance of the strong social dimension of this struggle, this week the Conflict corner publishes a text that aims to plant a seed for a broader approach to struggles not only in the healthcare sector, able to speak to different situations on a transnational scale, since the process of financiarization of welfare cuts across national borders. The text examines ways to oppose through the strike the severe cracks in the health care system by politically challenging the idea that the health-care workers, often women that are demanded to do the same with their unpaid work at home, have to fill the gaps of a failing welfare system. These cracks – besides being unbearable for the employees – put the security of the patients at risk. Co-workers at Charitè Hospital, by striking under the demand “More of us is better for all!”, have been able to create links to external groups and people with similar conditions and claims. A self-organised re-imagination of workplace struggle that seek to socialise its political claims, to make the employees daily working conditions relevant for all and therefore showing the possibilities to empower and enlarge new forms of workers’ organization.

In July 2017 the collective workers’ agreement negotiated in 2015 at Charitè Hospital in Berlin came to an end. This contract was the result of a couple of token strikes and the complete strike in June 2015. The striking nurses and care workers achieved a successful agreement on working conditions: it was the first agreement ever that fixed the minimum number of staff in the hospitals. The success of this struggle was remarkable in more than one perspective. Since years, care workers’ fights focused not so much on small pay rises, but on the conditions of the workplace itself: the condensation of labour and the extreme shortage of manpower on the stations.

The driving force in the preparations of the finally successful struggle was the local group of the hospital, and not the trade union officials. Basically, the group got a growing substantial support from the union (Ver.di, group three) but they created a new type of (self-)organization, the so called «consultants team» which in reality organized the strike and kept control over the negotiation process. The «consultants» were delegates from all teams involved. This structure could be understood as a democratic reformation of the struggle in the working places and guaranteed that the claims and the whole strategy of the negotiations were transparent to the strikers and could be discussed. Consequently, the workers were involved in the whole process.

Unlike former struggles, the workers of the Berlin Charitè opened their fight to the civil society and opened the doors to external supporters. The claim «More of us is better for all!» created the necessary links with external activities. These activities took care about the fact that the claims of the striking workers were present on the media and could not be easily overruled by the means of the employers.

The workers of the hospitals are generally confronting against the structural adjustments of the last years. The government in the early 2000s rejected a fundamental reform of the statutory health insurance, that would have involved also the private insurances for high income holders, but started a reform based on market principles of economic efficiency. The most radical change in this direction was the inauguration of the Diagnosis Related Groups (DRG) as the basis for refinancing the health care system. The DRG-system classifies diagnosis according to certain values and fixes the criteria of payment of the medical treatment. It also defines the duration of the treatment in the hospital. The payment is no longer proportioned to the need to heal the disease, but to the price-value of the diagnosis. As a consequence, some diagnoses bring more profit than others. Therefore, the number of profitable operations increased dramatically and caused an over-supply in some sectors while other sectors are structurally neglected.

In June 2017 the German television broadcasted a report on that matter. On the basis of the statistics of Statistisches Bundesamte, a team of mathematicians and journalists showed that the necessity of the operations was evaluated not on the basis of the result of the diagnosis, but according to the expected profit of the DRG-case. The general reimbursement following DRG creates a situation of competition between the hospitals to treat as many cases as possible, in the fastest and most profitable way. Subsequently we have seen an increase in cases which have no medical explanation, early releases of patients, and above all a dramatic decrease in staff, strategic cutbacks and substitution with subsidiaries.

More than twenty years after setting the course of «competition» and more than ten years after the inauguration of the DRG based reimbursement, we see very clearly that, while the costs of health care have not decreased, thousands of workplaces have been cut. This decrease means a shortage of 70.000 jobs in German hospitals.

Since years a war is waged against the workers, which is worsening working conditions and increasing the exploitation of labour: a huge number of overtime hours, short or no holidays, no time for breaks – this is the daily life of the employees. This leads to permanent stress, overload and exhaustion but also to dissatisfaction, no time for good treatment or having an ear for the needs of the patients. The shortage of staff leads directly to the transfer of infections, lack of hygienic standards and dangerous situations for the patients.

This shameful situation reflecting the experience in the hospitals led to a big organizing in the federal state of Saarland in the spring of this year. The employees of the hospitals, no matter the management of the single structures, are linked by the same experience: the inability either to fit in the demands of the “factory-hospital” or to give good medical treatments.

They are realizing day by day that they don’t face an individual but a structural problem. Their situation on the stations is the normality of hospital system, an expression of the neoliberal economization of the health sector.

The securing of these conditions by the power of the system, the exploitation through the call for altruistic motivations to do care work has a striking gender dimension: it will be women’s labour that is predicted to take all the load on their shoulders.

We are facing weeks and months of a fundamental labour struggle

The contract obtained through the power of the striking staff was all of it: new territory, milestone and lighthouse. Now after a year of a blocking attitude of the employers the struggle at the Charité sets the focus on how to guarantee its own results. But in addition to this we see that all over the regions, hospital staffs started to move towards a common goal: more staff in the hospitals. Starting from their day by day contradictions (mostly marked as individual insufficiencies in neoliberal discourse) they move towards common and collective activities.

In the next weeks we will see different forms of actions: the calculated and announced empty beds in the stations secures that the caring staff don’t feel responsible for patients while striking, while at the same time represent an economic pressure on the employers: each day of the strike means less income to the employers. There have been also «hygenic-actions»: the staff is ordering surplus personal to guarantee the practical implementation of the legal hygenic rules. This action may show how much personal is necessary, if the standards of hygienic health are put into action.

The fight for a legal quota of necessary personal is the focal point of the opposition of good care and challenges the structural logic of the DRG-system.

The struggle in the Charité will be at the centre

The struggle has a signal role for other hospitals and inherits the potential to spread either geographically and politicallyand creates new political spaces.This kind of new political spaces are necessary within a situation in the society that is framed by dynamics of economic crisis and contradictions that immanently strike the care sector.

The cracks in the wall of the neoliberal system of power in the health sector are to be deepened and common struggles have to target an organisation of the health care sector based on the needs of the patients.Until now the labour struggle in the public sector (kindergartens, public transport etc) lack a widespread support of the society itself. This is due to a media discourse dominated and empowered by the beneficiary of the neoliberal system: the focus is therefore on the implied opposition of interests between striking and non-striking staffs, strikers and patients. The same media strategy is used in the health sector by the employers who try to present the strike as an injury to patient interests. In reality, it is not the strike, or other forms of struggles that are endangering the patients, but the normality of the DRG-system that is a danger to them.

To create better conditions of labour in the caring staffs of the hospital by hiring more staff that creates better conditions of treatment is the interest common to all of us: as patients, as potential patients and as family parents. But let us keep in mind that even if the staffs started to move and fight for better labour conditions and the employment of more staff they will not succeed if they will be left alone! The solidarity and the support for their demands out of the society is crucial for the success of this struggle. It is needed to create political pressure on the employers.

Left, or radical left minded, feminist movements are asked to bring up solidarity and support actions for the hospital staffs. If we want, we can be part of a struggle that targets not a small facet, but a central part of the immanent organisation of the neoliberal system of the health sector. It is not anticapitalistic by words, but by demanding for a need based organisation of one of the most important economic sectors.

With this contribution we aim to start a discussion among us to understand how to establish useful transnational links for a radical change in organizing public health.