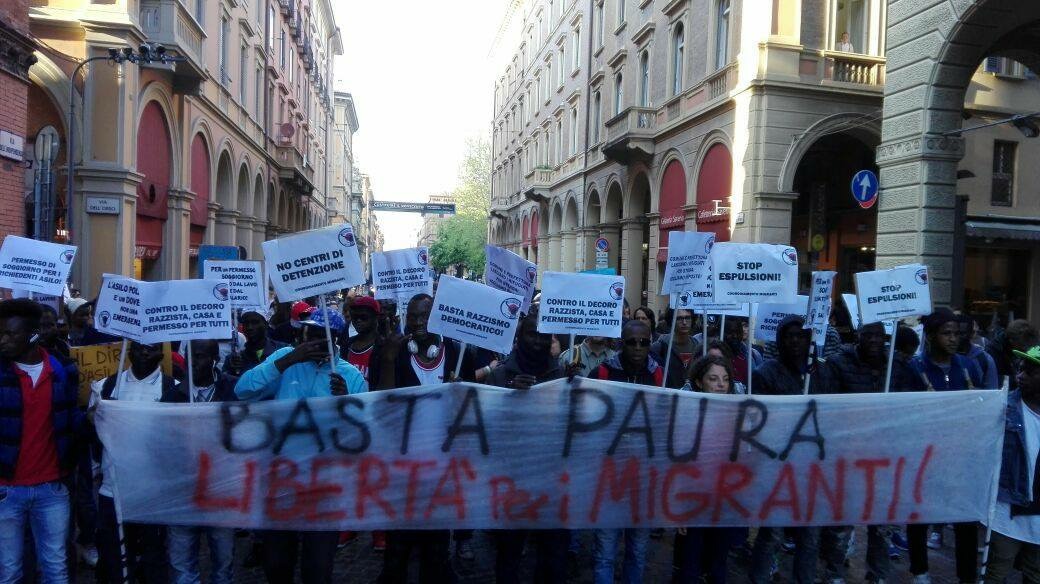 The Conflict Corner presents a text from the Migrants’ Coordination (Bologna), focusing on the recent migrants’ struggles taking place in Bologna. The text places them within the framework of the current intensification of the connection between precarity and government of mobility, an issue that the TSS platform has been addressing since the very beginning. In the text the main effects of the recent decree concerning refugees and migrants approved by the Italian government, «Minniti-Orlando», are recognized not so much in the increase of actual deportations, but rather in the production of a precarious and unstable labor force, disciplined by the threat of expulsion and by the arbitrariness of the decisions of the local immigration offices. This precarity does not concern only recently incoming migrants: also many of those who live in Italy since years risk constantly to lose their documents, due to the uncertainty of their jobs or due to the sudden choice of a public officer. All this is coupled with an impressive wave of repression broken down on migrants, who are more and more treated just as an issue concerning the maintenance of law and order. The challenge laying in front of us is to build connections so as not to treat refugees and migrants as «margins» just needing solidarity, but as a starting point from which to address the ever increasing process of precarization, of work and life, concerning precarious and industrial workers as well. The discussion on how to overcome fragmentation and localism will be at the center also of the next TSS meeting in Ljubljana, at the core of so called Balkan Route, from the 19th to 21st of May.

The migrants’ storm that since long is «haunting» Europe has brought about the acceleration of the neoliberal management of the crisis. In Italy, and outside Italy, the response to this migratory pressure includes not only a stricter control over mobility, but it also changes the society as a whole. The Italian government has just approved a decree (Minniti-Orlando) that has the declared purpose of speeding up the identification of refugees and making deportations effective. In Italy, every legal channel of access to the national territory has been closed, leaving migrants with the sole possibility of presenting themselves as refugees or asylum seekers. Forced in the straitjacket of the right to asylum, migrants are stripped off their freedom of action and immediately handed over to the immigration reception circuits. Those who are not included in these categories, and most of them aren’t, are immediately classified as «economic migrants», with no right to stay. The punishment for trying to improve their own existence is deportation. 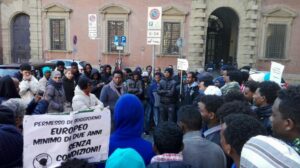 The decree aims to speed up deportations by means of new and more functional «Permanence Centers for Repatriations» and to optimize the government of mobility, by setting up specialized courts for its management, whose main novelty is the elimination of a process within trials. The effect of this measures, though, will be that of rendering migrants illegal, ready for a more intensive exploitation. The figures show that, until now, the repatriations actually carried out are just the 10% of the total number of expulsions. Often what is meant with «expulsion» is the delivery of a deportation order that leaves the migrant on the territory, deprived of access to any protection or right, as well as constantly fearing to meet a division of law enforcement. Just as often, this encounter is solved with another deportation order. If we think that alone in 2015 the territorial commissions have «produced» 41.000 illegal migrants, and we add them to those who lose their residence permit due to the lack of work, to insufficient income, or to the increasing difficulty of renewing the documents from the immigration offices, which are currently withdrawing residence permits even from minors, we can gain a picture of what we can call a massive «clandestinization» of migrants within the Italian territory. In the chain that goes from the territorial commissions to the police stations to the expulsion, passing through the migrants’ reception centers, a mobile and flexible precarization is produced, which ensures the presence of a migrant labor force on the threshold of legality that, to avoid the threat of repatriation, must accept the blackmail caused by its status.

The connection between refugees and the job market, does not simply concern the «socially useful jobs» made for free by asylum seekers, which allow municipalities to carry out at cost-free maintenance works, that current budgets wouldn’t cover. The varying degree of tolerance that municipalities can apply allows also the flexible production of a workforce that can be paid or underpaid, which can live on the uncertain boundary between waiting for the response to their asylum application or enter an illegality which is conveniently tolerated, finding a legal work or recurring to illegal labor. The effect of this is the production of a segmentation of the labor market, aimed at keeping wages under control.

Moreover, the recent decree gives more power to the local administrations, which should treat migrants as a local problem of public order and of «urban decorum», a category measured on a generic and arbitrary «sentiment» of social insecurity, justifying any possible dispensation from the 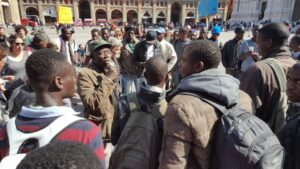 universality of the law. As a matter of fact, the mayors become a migrants’ counterpart, which is at the same time the employer responsible of their unpaid labour and the one who decides on the tolerability of their presence on the territory. In the name of «urban decorum», in the last days in Milan the authorities have arrested dozens of migrants from the central station, stopping whoever had a darker skin than average. In Rome, a municipal police raid provoked the death of a Senegalese street vendor, a death happened in unclear circumstances while he was trying to avoid the control. In every city migrants are daily arrested, held, imprisoned, threatened.

The reaction of the institutions against the struggles that migrants have recently organized in Bologna and other cities foreshadows the consequences of such an administrative decentralization. Like many others in Italy, the municipality of Bologna feeds the absolute precarity of migrants’ lives adding the precarity of the status to the social one. The form of this blackmail is the wait, a condition in which migrants permanently live. It is the wait for a residence permit, for the interview with the territorial commission, for the relocation, for a place to sleep, and even the wait for citizenship, when all the requirements are met. The municipality of Bologna has used the “Winter Plan”, a measure ideated for homeless people, as a surrogate for migrants’ reception. It consists in the opening of public dorms for the winter season, in order to give shelter to migrants and refugees who are excluded by reception programs whilst being entitled to it. Some of them are waiting for their residence permit that takes up to one year – instead of thirty days, which is the deadline fixed by law – to be ready. In this wait, migrants are obliged to stay in Bologna without the possibility to move and they need to fight even to have a shelter. These dorms hosted hundreds of migrants and refugees who mobilized against the closing of the Winter Plan. At the end of March, the very authorities who put migrants inside the dorms evicted them without offering alternative solutions and asserting again the 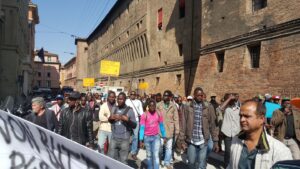 , between those who did leave the fingerprints in Bologna and those who didn’t, while hundreds of people were forced to live under the bridges, in parks or in abandoned trains. Therefore dozens of them, who united together with other migrants in an association called Asahi, together with Migrants Coordination and other support groups of the city, organized a mobilization that has produced many assemblies and a demonstration in the center of Bologna. Though the responsible institutions promised to look for a solution, while we write the situation is still uncertain and migrants are ready to go back on the streets to reclaim what is due to them.

Far from accepting the discriminations and the institutional racism, far from being considered poor victims, migrants and refugees in Bologna, with their claim to freedom, have refused once again the chains of racism enforced by institutions. They took the streets, in the last weeks as they already did on the 20th of February. While in London thousands were demonstrating for the “One Day Without Us” against Brexit and exploitation of migrants and precarious workers, also in Bologna a demonstration occupied the city centre. Migrants have decided that it is useless to keep silent waiting for the territorial commission, the prefecture, the police headquarter to decide over their life. They know perfectly that what they will receive is a denial, that what awaits them is illegality, exploitation or expulsion. For these reasons they took to the streets revealing the blackmail of a welcoming politics that only produces poverty and uncertainty, denouncing the European government of mobility and the borders regime, refusing the overall conditions of exploitation to which Europe and its States want to condemn them. 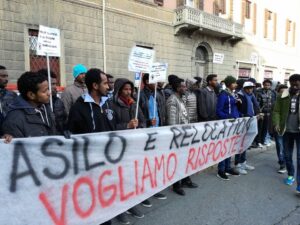 The conferring of new powers to the local institutions, mentioned above, shouldn’t encourage an exclusively local expression of the migrant struggle. Unpaid work, expulsions, detention centers, the institutional racism that regulates the increasingly weaker procedures for getting asylum status are indeed part of a European government of mobility aiming at transforming migrants in a blackmailed workforce that can always be evicted when becomes useless. That is why also in Bologna it is not possible to be anti-racist without addressing the European space as a battlefield, it is not possible to organise mobilisations and struggles with migrants, men and women, without connecting the struggles against the external and internal borders of Europe, or without considering the transnational scale of the migrant condition. While Italian government, following the European line, wants to make migrants a problem of police and of mere administration, it is necessary to look for ways to show up the strong political connections between the demands of migrants and the claims coming from who is now attacked by the same social insecurity. Far from being just «marginal» subjects, who need our solidarity, the struggles of refugees are today the opportunity to rebuild a collective force against the wage regime affecting all of us, migrant and precarious workers, women and men.