Strike against the Neoliberal Education System: I. Albania // II. Macedonia 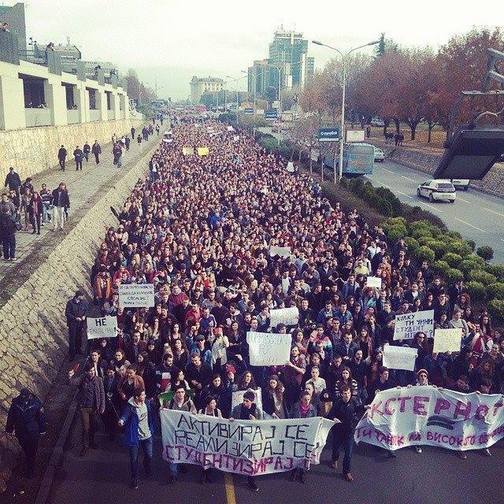 We begin our new website section called «conflict corner» with two reports written by Për Universitetin Movement (Albania) and Student Plenum (Macedonia) about neoliberal education reforms in their countries and the struggles against them. While the education sector is one that has traditionally triggered national protests against national laws, the common trends of the neoliberal transformations of schools and universities force us to imagine a transnational student movement, able to strike back and disrupt the claim that students are just present or future labor force to be trained for exploitation. We start from two countries in the Balkans, as a confirmation of the centrality that our platform has ever since attributed to Eastern Europe as a laboratory of trends and reforms of neoliberal Europe. By this we also invite other student collectives and networks from all over Europe to send contributions and engage to form a common reservoir of analysis and practices to build a common power across internal and external educational borders.

One of the last public strongholds to be taken and transformed in neoliberal terms has been the higher education. Firstly introduced in Chile, and afterwards in other Latin America countries, these reforms are going to be experimented even in Albania. Coming from a Stalinist socialist past, since the nineties Albania has been one of the testing grounds for neoliberal reforms.

What has happened in Albania in the last years is the expansion of private universities and the governments’ tentative to introduce not only facilities for them, but to remodel the financial funding scheme of universities so that private ones can profit. Private universities emerged more than a decade ago, and they filled a quantitative gap that the public ones left behind, namely they offered a formal opportunity for people that didn’t pass the admission tests to attend public universities, especially those located in Tirana.

The way they legitimate this restructuring of higher education is by considering that universities should serve the market, turn themselves into commercial agencies, so that they can counter the economic problems, like the growing unemployment, which recently has officially reached more than 20%, but it is considered even higher.

Following international financial institutions “suggestions” higher education is progressively being perceived not as a basic right, but as a service one has to buy at the near-full price. Following the same neoliberal logic, especially its financialization aspects, these reforms are aiming at «easing» the financial burden of the future students by facilitating their indebtedness to banks.

But what are the deep implications of this financial indebtedness? On the one hand they make life easier for private universities; giving them the state’s supported loans for recruiting students. The effects of the nearby reform would be felt on public universities. Being forced to compete with private ones, following their logic, they should restructure themselves as market units. On the other hand, one of the main problems with private universities’ easy graduation stems from the corrupted and clientelist public administration.

As in other neoliberal restructurings the Albanian governments are opening the ground for public universities to build the so-called public-private partnerships with private companies eager to work with them. The last direct consequence this reform would have on public universities is the growing antagonism between faculty and students. In the end: there’s still a ray of hope. In the University of Tirana, the largest public university, students are organizing through public assemblies, manifestations and occupations.

The Macedonian law on higher education has been amended so many times during the last 7 years that even the code articles are contradictory one to another, practically inoperable and do not provide any improvement. The last amendments to the law, passed in parliamentary procedure on 14.01.2015, were the final straw. They were announced a few months before, and the academic society in Macedonia, led by the university students, stood in defense of the higher education. Provoked by the new student evaluation mechanism– the state exam (previously announced as “external testing”) –the students initiated a new kind of student activism that gave birth to the Student Plenum. The state exam concept meant external evaluation of all students after the end of the second and the fourth year of their studies. This concept was problematic in two things: first, it was against the autonomy of the university, guaranteed by constitution and by law, and secondly, it was humiliating to the students, as it used multiple choice questions in order to grade the academic knowledge and skills.

The Student Plenum responded to this by organising two protest marches, the second of which had 10.000 participants and thus was the most attended march the country has seen since it became independent. But, despite all that, the law was passed. A month after the passing of the law, on 11.02.2015, the Student Plenum declared a so-called Autonomous Zone inside the building of the Faculty of Philosophy and Philology, which are both part of the state university of Ss. Cyril and Methodius. At the same time, the Plenum stated the demands that had to be fulfilled in order to end the occupation. After two meetings in the Rectory of the University of Ss. Cyril and Methodius, on 24.02.2015 the demands were met and by that the occupation was ended. It was agreed that a new law on higher education was to be drafted, and the drafting would have three stages. At the moment, the Student Plenum has two delegates taking part in the initial stage, which consists of drafting the main framework of the new law on higher education. The final bill is considered to be presented to the Ministry of Education within the period of 9 months, or until the beginning of 2016, when the moratorium on the present law expires.

One of the biggest problems of university students in Macedonia is the student standard of living. The photos of the student dormitory “GoceDelcev” that went viral last year reflect the present state of the living conditions in all student dormitories in Macedonia. They do not meet the minimum living standards. There have been no funds invested in their maintenance or potential reconstruction. Besides that, university students in Macedonia, unlike their peers in some of the western countries, do not enjoy any student benefits, such as free public transport, lower tuition fees etc.

The real culprit that led to the present situation is probably the lack of legitimate student representatives. According to the Statute of the University of Ss. Cyril and Methodius, the Student Parliament is the official voice of the students, but its members, led by their president, have an unlawful status as their tenure has expired. Even if their legal status wasn’t in question, their legitimacy is invalid – they do not represent the demands and the needs of the students. Because of this, the need for a student organisation was enormous and the forming of the Student Plenum was a spontaneous, natural event.