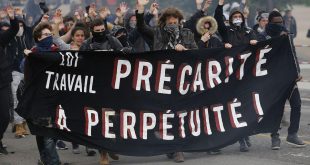 The aim of this workshop has been  to analyze the evolutions of precarisation processes in a transnational perspective, focusing on unemployment, welfare and social dumping as tools ofindividualisation of workers and unemployed persons. On the other hand our goal was to discuss about how to organize the different struggles and experiences around these issues in a common political frame. During the workshop we started the discussion talking about the different precarisation dynamics around Europe. There was a convergence between different experiences on the idea that precarity is not a specific condition of some workers, but is the normal regime that governs the organization of work, workers and unemployed.  It is a regime which has been enforced in the last decades, and which is now accelerating, also due to the directives of the EU contained in the agenda 2020. Some common trends have been recognized as key: the liberalization of precarious contracts that are not temporary anymore but can last one’s whole life; the diffusion of extremely flexible and just in time way of supply labor (see vouchers in Italy, 0 hours contracts in UK, 1 euro jobs in Germany, recibosverdes in Portugal); the dismantling of welfare and social security system, which is then used to command over people so that they accept every job they are offered (see for instance conditional welfare in the UK or the unemployment benefits in France or the welfare benefits understood no more as a right but as a loan the State makes wanting something in return); connected to this the massive role that job centers have acquired in the last years as managers of workers; spread of false « auto-entrepreneur » works, were the workers are considered as boss of themselves or partner of the enterprises.  The workers and the unemployed become the only responsibles of their work or non-work situation.

Even if the precarity is more and more the common condition for millions of people we recognize that is still difficult to strike massively at a national level as well as across the borders. Experimentations of cross-border strike, such as that happened at the border between France and Belgium to show the connection between the struggle against the loi travail and that against the loipeeters, can be taken as a model for imagining possibilities of mobilization against precarization. Knowing that they have been made possible by already existing connections between unions, while the challenge would be also to gather and involve those precarious workers who are not represented by any unions. On the other hand, while there are evident commonalities between the situations we experience in the different countries there is still a lack in common analysis and common knowledge: in order to fight against this Europe-wide precarization we need to work to build a common language that help us recognize ourselves as part of the same struggle. The TSS platform and website can be the place where we build and strengthen this work.

In this direction, during the second part of the workshop we discussed also the political meaning to endorsing as common European claims the European minimum wage, European welfare and European residence permit. The CIP experience with their victory through which they obtained the status of «intermittent workers» was taken into consideration as a paradigmatic struggle to fight against exploitation of workers and unemployed. At the same time we agreed that claims about income needs to be put in relation with other claims that concern the welfare systems, as well as with other able to take into consideration the effect of transnational mobilities and migrant work on labour regime. At the same time, a lot needs to be done to ground these European claim in each local context, coming to terms with the differences and with the risk that each of this claim, if isolated or understood just nationally, could be turned against our political aim of building connections among fragmented situations. This discussion should go on as part of the construction of our common language.

Read the presentation of the workshop here: https://www.transnational-strike.info/2016/10/18/workshop-n-4-precarization-and-unemployment/