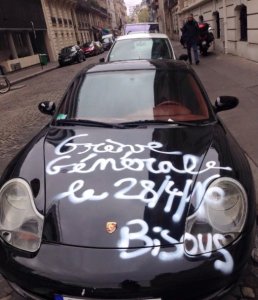 The Independent Union for Precarious and Autonomous workers (CLAP – Camere del Lavoro Autunomo e Precario) part of the Transnational Social Strike Platform will go to Paris to participate to the general strike against the Loi Travail called for the 28th April.

When the general strike against Loi Travail the 31st March became a permanent occupation of Place de la République, something new has happened in Europe, and not only in Paris. A real event of great importance for three main reasons.

Firstly, the forms of social strike, already prevalent in the anti-CPE struggles in spring 2006, met the forms of Puerta del Sol and the Spanish 15M (2011): the resistance, not only of young people against labour precarization, is combined with the constituent research of new democracy. Secondly, the rejection of austerity policies, so relevant in the southern countries, finally spilled over in France. Thirdly, this was a totally unexpected social response after the terrorist attacks and the imposition of the state of emergency, since last November.

From Paris, and from all France, we receive some unequivocal messages: to defend workers’ rights it is also necessary to rethink the forms of political decision; no European state is immune from austerity measures and neoliberal management of the crisis; fighting the war inside and outside the continental borders means extending the rights and regaining democracy.

Are the struggles of recent weeks and European movements able to answer to these French challenges? At least we need to try to live up to what is happening. It is not the first time we go to France to ‘take notes’: it happened in the 90s, when we went to support the winning fight against the ‘minimum entry wage’ (1994), the transport workers fight (1995), and the fight of unemployed (1997), and again in the spring of 2006. Thus, we go again on Thursday April 28th, during the French general strike, not to better understand a “national” issue, but at the contrary to experience the European movement of struggles, the discuss the transnational conquest of the strike, and the insistence for a metropolitan democracy. The same questions that we have posed last October in Poznan, in the first Transnational Social Strike Meeting, and then in the organization of the 1st March. These French struggles and the #GlobalDebout launched on the 15th May, are an extraordinary new opportunity to continue to experiment together.

CLAP for the Transnational Social Strike