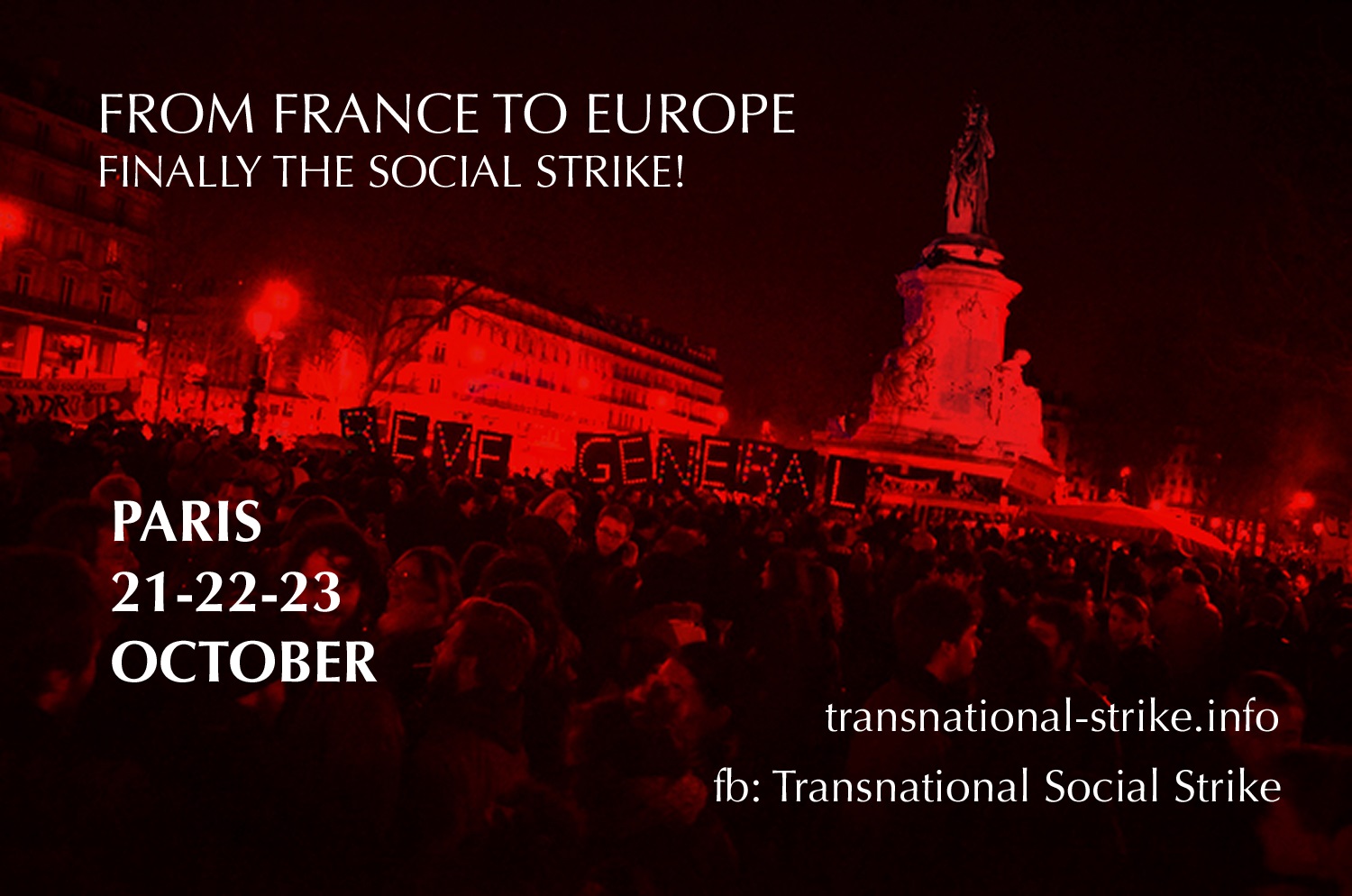 FROM FRANCE TO EUROPE. FINALLY THE SOCIAL STRIKE!What is happening in France goes well beyond the French borders. While the proposed labor bill clearly confirms that precarization is at least a European issue, the struggle against «the loi travail and its world» realized what we are aspiring to and looking for: a mass social strike. More than ever, today the question is how to bring this struggle and uprising on a transnational scale.This step is necessary and unavoidable. The «loi travail» is only a fragment of a wider project aiming everywhere at depriving millions of people of the possibility of refusing a present and a future made of exploitation. The Greek austerity package, the Jobs Act in Italy, the Hartz IV in Germany, the loi Peeters in Belgium are just few examples, which all go in the same direction: cuts in wages and welfare, the financialization of retirement benefits, the production of a migrant labor force compelled to work at any condition and price in order to obtain a residence permit and to pay the «debt» of welcoming policies, the creation of a disposable labor force at the mercy of the employers entitled by the State with a despotic power. Even the decision of the UK to leave the EU will affect workers both in the UK and all around Europe. National policies are not simply national anymore. The increasing mobility of labor and the transnational organization of production make each city, country, workplace inhabited by transnational dynamics. Precarization concerns all generations and sectors, it is a general condition fed by differences and hierarchies that cross and produce borders.Against the convergence of European labor policies, against the illusion that the re-nationalization of political initiatives and anti-immigrants policies are the answer, against capitalism and neoliberalism, we need to build a transnational convergence of struggles. The massive social strike happening in France shows the way. Strikes in each sector of production and services have been coupled with a massive mobilization in the metropolis, they involved also the precarious workers who are not represented by the unions and have been able to interrupt both the production of value and the realization of profits. Experimentations going in this direction in Europe in the last years – the strike of migrant labor, the strikes in the logistic sector and along the chains of production and care work – have been brought to a mass dimension in France. The logic of solidarity and the division between the struggles inside and outside the workplaces have been overcome by means of a common political goal. The plea for more democracy, for justice and social rights, against police repression have found in the opposition to the despotism of wage and of the employers a common point of convergence and a political priority. Now it’s time to bring this movement to a higher level, knowing that the struggle against precarization does not and cannot end with the opposition to national laws.Starting from the message of revolt that reaches all corners of Europe from France, after a first assembly in Paris, the Transnational Social Strike Platform invites workers, activists, unionists and European networks to meet again in Paris from the 21st to the 23rd of October to discuss how the social strike in France can pave the way to a transnational uprising of living labor against precarization. We need to consolidate a common space of convergence and organization where precarious, migrants and industrial workers can recognize themselves, where different conditions of precarity can meet and confront, where to build a common discourse and claims that can become a point of reference for millions of people who daily and increasingly refuse exploitation and precarity in Europe and beyond. To seize the transnational potential of the current mobilization we need to bring Europe to France, so that France can be brought to Europe and even farther, in a transnational day of actions and strikes where we can make a step forward for the organization of the uprising of living labor in Europe and beyond.