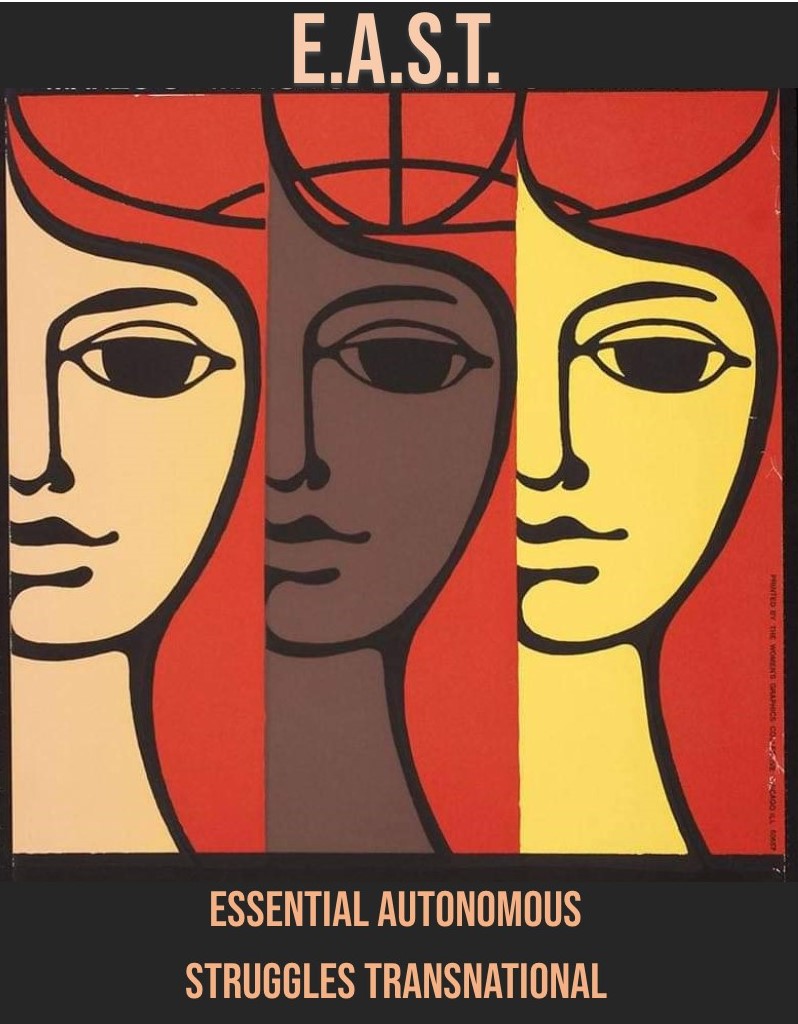 The new network E.A.S.T. (Essential Autonomous Struggles Transnational) emerged with the aim to connect different ongoing and emerging struggles on the transnational level and to discuss and organize around social reproduction as a battlefield. Having started from a small group of activists and workers, now it is time for us to reach out to all those who want to engage in a transnational political initiative, in Central and Eastern Europe, at the borders of the European Union – in Turkey, Ukraine, Georgia and Belarus, along the Balkan route… – as well as throughout the whole European space. We see borders and hierarchies of all types as constitutive of Europe of today: persisting borders between regions, between core- and peripheral locations in regional and national economies, sexual, racist and class hierarchies need to be addressed and overcome because they prevent us from coming together and fighting together. For this reason, we invite collectives, unions, workers, activists to join an open online assembly on Sunday 25th of October at 18:00-21:00 CET.
The Covid-19 pandemic showed, more than anything, the deep interconnectedness and mutual dependencies that exist between different sectors and countries, and particularly between production and social reproduction. It showed that for the reproduction of our lives and society, some, especially women and migrants, are supposed to sacrifice themselves, to put their lives in danger, to ‘naturally’ fill the gaps of more and more fragile welfare systems, and to bear tremendous increases in workload in order to reconcile working at home and outside, while being left without state aids. Nonetheless, in the past months, with their diverse struggles, women, migrants, and workers have proved that they will not accept losing their jobs, or losing their houses and their residency permits; that they will not accept working more, because they are considered ‘essential workforce’, but are left to survive on low wages or without adequate protections. They have also demonstrated their resolve to not remain silent in the face of the violence they experience, both in domestic spaces and at the workplaces, and in the facet of institutional racism and patriarchal capitalism.
While Central and Eastern European countries share a common history of drastic neoliberal reforms, whose systematic implementation in the region over the last decades has set the conditions for the horrific social-economic consequences of the pandemic, they are also the stage where powerful struggles of resistance have been taking place. We have seen this in the Black Protest against limitations of abortion rights in Poland; in the nurses’ strikes in Bulgaria; in the live-in domestic migrant workers’ organizing in Austria; in the lgbtqi* and feminist protests against gender violence in Romania; in the migrant women’s protests in Turkey and many others. We think that any transnational initiative on a European level cannot but start from this region and these struggles if it wants to tackle the transformations we are living through. The European Union is based on an internal market of cheap labor that comes predominantly from the East, which is employed in factories, in construction, in agriculture, in logistics, or does the domestic and/or (health-) care work necessary to sustain production and the remnants of the welfare systems in the West. Not only does the West depend on devalued labor from the East, mostly performed by migrants and women, but exploitative and racist EU labor and migration policies also have impacts well beyond the borders of the European Union, such as in Turkey, Georgia or Ukraine. Migrating for work in the West seems often to be the only chance for many to live a decent life, due to major wage differentials among European regions. With or without the need of a visa, this means having to struggle against institutional racism, isolation, and the constraints of the sexual division of labor. The transnational space we live in is crisscrossed by borders and racist and sexual hierarchies that challenge our capacity to struggle together.
In order to address these challenges, we want to enlarge our initiative and consolidate a space of discussion, as a starting point both to connect existing struggles and to ignite new ones. We invite all those – women, workers, migrants, unionists, activists – who want to fight against exploitation, racism and male violence through the Central and Eastern European space and beyond. We want to involve unions who are willing to commit beyond single disputes and national or local contexts, while keeping in mind the problems of unionization in highly informalized sectors, such as the domestic, care and agricultural ones.

What is your experience of struggle?

How to identify and further the connections with other struggles on the transnational level?

Is it possible to start imagining together, following the lead of the migrants’ and global women strikes, a transnational strike of essential labor?

We would like to hear from you on these questions and more!

The meeting will be hosted on Zoom and streamed online on the Facebook page of this event. More info on how to participate will follow on the even page.