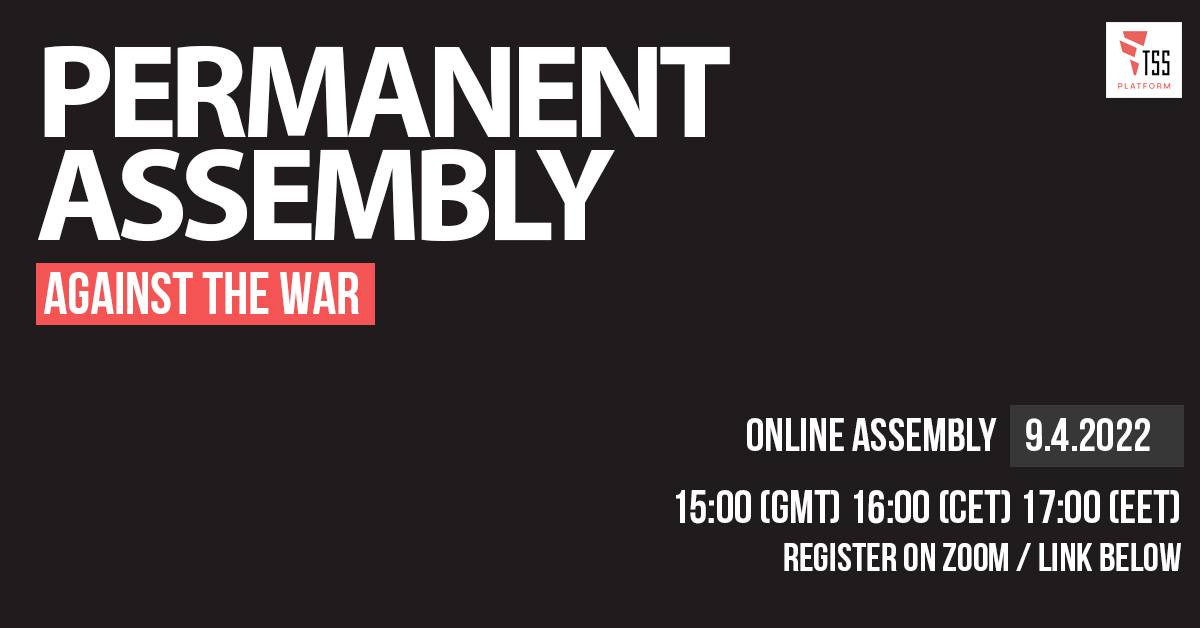 Transnational online meeting of the Permanent Assembly Against the War: on the 9th of April, 16.00 CET. After the first big assembly organized on the 20th of March, we call all participants and others who want to contribute to this process to a second moment of discussion to frame our collective opposition to the war and a transnational politics of peace.After more than one month from Russian invasion of Ukraine, the situation on the ground is showing all the horror of war. But this war is not an isolated event.

The wider consequences of the war are shaking global relations and are leaving many, including activists and social movements, in great uncertainty about how to deal with this new situation. Solidarity initiatives with Ukrainians suffering the direct effects of war are multiplying and we stand by and support local mobilizations or assemblies, solidarity initiatives, and any form of practical support. However, as the war continues it appears increasingly important to imagine a wider political initiative against the militarization of lives.

The aim of the Permanent Assembly Against the War is not that of substituting the variety of existing initiatives, but that of establishing a political infrastructure where collective discussion and collective power against this war can grow. On the 9th of April, we will continue to develop a common framework of struggle in which our fragmented initiatives can get stronger in the direction of a transnational politics of peace that must be built collectively.

The meeting held on March 20th established some key pillars on what a transnational politics of peace looks like. We made clear that being against the war does not mean being neutral: the politics of peace we intend to build together is on the side of those struggling to survive and resist in Ukraine, those fighting against the war in Russia, refugees and migrants fleeing from the war.

More widely, we think that a transnational politics of peace is needed to restore the possibility to fight the struggles we need more: on the side of workers against exploitation and the attempt to use the war to implement harsher conditions against workers. On the side of migrants against institutional racism that continues to be implemented behind the façade of openness towards refugees from Ukraine. On the side of women and LGBTQ+ people claiming freedom against patriarchy.

This war reminds us of the urgency to build a collective and autonomous political capacity in a world that is shaken by violence as well as by transnational processes that define how capital works and the possibilities of our struggles.